Republicans Are Killing Women: US Maternal Death Rate Climbs; Female Deaths Rise In GOP Counties. “Today’s mothers are twice as likely to die of pregnancy- or childbirth-related causes than their mothers were. 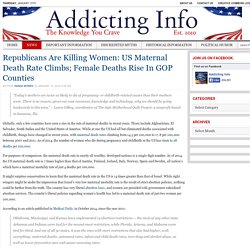 There is no reason, given our vast resources, knowledge and technology, why we should be going backwards in this area.” – Laura Gilkey, coordinator of The Safe Motherhood Quilt Project, a nonprofit based in Sarasota, Fla. Globally, only a few countries have seen a rise in the rate of maternal deaths in recent years. Those include Afghanistan, El Salvador, South Sudan and the United States of America. While at one the US had all but eliminated deaths associated with childbirth, things have changed in recent years, with maternal death rates climbing from 14.5 per 100,000 to 17.8 per 100,000 between 2007 and 2011. As of 2014, the number of women who die during pregnancy and childbirth in the US has risen to 28 deaths per 100,000.

For purposes of comparison, the maternal death rate in nearly all wealthy, developed nations is a single digit number. Read the study at this link. Pregnant women aren’t being arrested to protect their fetuses. Lately, articles have been circulating about the control and punishment of pregnant people for crimes like fetal homicide or assault on a fetus, an issue that we’ve been talking about here for years. 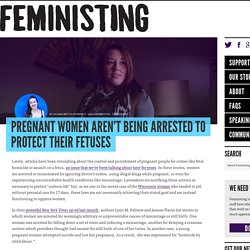 In these stories, women are arrested or incarcerated for ignoring doctor’s orders, using illegal drugs while pregnant, or even for experiencing uncontrollable health conditions like miscarriage. Lawmakers are justifying these actions as necessary to protect “unborn life” but, as we saw in the recent case of the Wisconsin woman who landed in jail without prenatal care for 17 days, these laws are not necessarily achieving their stated goal and are instead functioning to oppress women. In their powerful New York Times op-ed last month, authors Lynn M. Paltrow and Jeanne Flavin list stories in which women are arrested for seemingly arbitrary or unpreventable causes of miscarriage or still birth. Anti Abortion Laws Mean Erosion of Rights for Pregnant Women. “We have to stop categorizing abortions as justified or unjustified.”

South Carolina: Swell for fetuses, less so for victims of domestic violence. [Trigger warning for domestic violence] In Florida, Stand Your Ground was used as the foundation of George Zimmerman’s defense after he shot and killed Trayvon Martin. 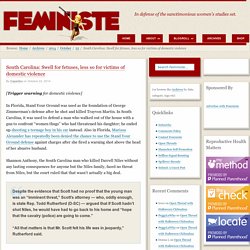 Why I Have No Regrets About Sharing My Abortion Video. Last week Emily Letts talked to Cosmopolitan.com about her abortion video. 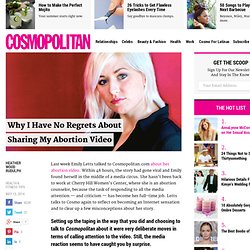 Within 48 hours, the story had gone viral and Emily found herself in the middle of a media circus. She hasn’t been back to work at Cherry Hill Women’s Center, where she is an abortion counselor, because the task of responding to all the media attention — and criticism — has become her full-time job. Letts talks to Cosmo again to reflect on becoming an Internet sensation and to clear up a few misconceptions about her story.

Setting up the taping in the way that you did and choosing to talk to Cosmopolitan about it were very deliberate moves in terms of calling attention to the video. Still, the media reaction seems to have caught you by surprise. It’s crazy. It is a story about filming your abortion. When it was just the video, it was just three minutes of a procedure. Do you regret any of the interviews you’ve done since the story came out? The way Dr. It starts with shame. 20-Week Abortion Ban in Nebraska and Oklahoma: When Does a Fetus Feel Pain? <br/><a href=" US News</a> | <a href=" International News</a> Copy Danielle Deaver was 22 weeks pregnant when her water broke and doctors gave her a devastating prognosis: With undeveloped lungs, the baby likely would never survive outside the womb, and because all the amniotic fluid had drained, the tiny growing fetus slowly would be crushed by the uterus walls. 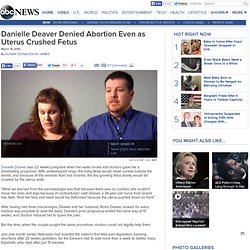 Racializing the Abortion Debate. Shame And Stigma: What A 3-Minute Video Can Teach Us About Anti-Choice Media. Part of the past success of the anti-choice movement has been using the media to convince Americans that abortion is gross and dangerous. 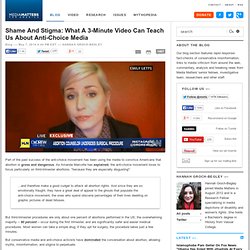 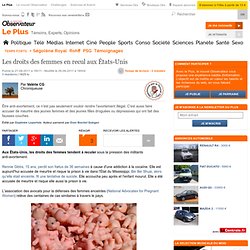 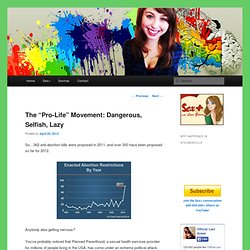 Anybody else getting nervous? You’ve probably noticed that Planned Parenthood, a sexual health services provider for millions of people living in the USA, has come under an extreme political attack. Major threats to defund the organization, straw-man sting operations, and multiple bombings of clinics are just a few recent events in this chaotic spiral. Planned Parenthood provides a much needed service in the United States: birth control, family planning, pregnancy testing, cancer screenings, STI prevention, HIV/AIDS services, and various other vital reproductive health services that a healthy country desperately needs access to.

So why all the violence? Because 3% of Planned Parenthood’s funds go toward abortion for accidental pregnancies. But I think invested time and resources in that debate is futile. Humans will never have universal feelings about abortion. 1. 2. 3. 4. 5. L'avortement fait maison. State Ultrasound Requirements in Abortion Procedure.