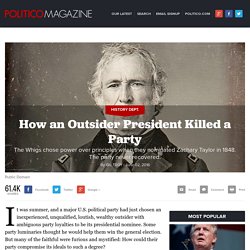 Some party luminaries thought he would help them win the general election. But many of the faithful were furious and mystified: How could their party compromise its ideals to such a degree? Sound like 2016? This happened a century and a half ago. Fact-checking U.S. politics. Did attack ads affect Iowa’s outcome? There was a willful suspension among GOP candidates of Reagan’s famous 11th Commandment, the one commanding Republicans not to attack a fellow Republicans, in the weeks leading up to the Iowa caucuses. 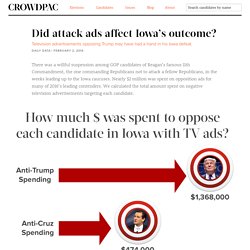 Nearly $2 million was spent on opposition ads for many of 2016’s leading contenders. We calculated the total amount spent on negative television advertisements targeting each candidate. As it turns out, Donald Trump wore the biggest target on his back, having $1.4M spent by various group on TV ads against his nomination bid. This may have played a crucial role in his second place showing, nearly four percentage points behind the caucus winner, Ted Cruz, despite polling far ahead of the Texas senator before the caucuses began. The attack ads by and large painted Trump as a closeted liberal, showing pictures of him with democratic candidate Hillary Clinton and clips of Trump identifying himself as a liberal. 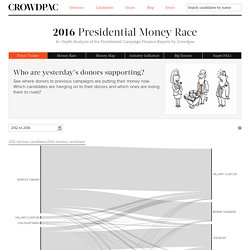 See where donors to previous campaigns are putting their money now. Which candidates are hanging on to their donors and which ones are losing them to rivals? Source: Crowdpac.com. 1) Gun Deaths by State Ideology. Five Thirty Eight. N.H. Republican Primary Forecasts - FiveThirtyEight. Gun Deaths by State Political Leanings. Earlier in December, following the tragic events in San Bernardino, we posted this analysis of gun deaths per capita according to each state's political ideology, as measured by the political donations of its residents. 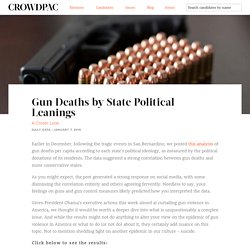 The data suggested a strong correlation between gun deaths and more conservative states. As you might expect, the post generated a strong response on social media, with some dismissing the correlation entirely and others agreeing fervently. Needless to say, your feelings on guns and gun control measures likely predicted how you interpreted the data.

Crowdfund U.S. Politics. US Mass Shootings, 1982-2015: Data From Mother Jones' Investigation. Editor's note: This dataset originally covered 1982-2012 and has since been expanded through 2016. 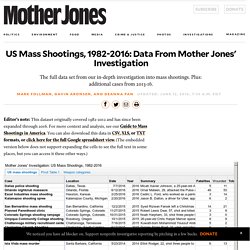 For more context and analysis, see our Guide to Mass Shootings in America. You can also download this data in CSV, XLS, or TXT formats, or click here for the full Google spreadsheet view. (The embedded version below does not support expanding the cells to see the full text in some places, but you can access it these other ways.) Analysis of recent mass shootings.