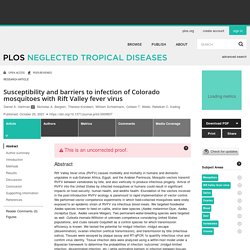 Mosquito vectors transmit RVFV between vertebrates by bite, and also vertically to produce infectious progeny. Arrival of RVFV into the United States by infected mosquitoes or humans could result in significant impacts on food security, human health, and wildlife health. Elucidation of the vectors involved in the post-introduction RVFV ecology is paramount to rapid implementation of vector control. We performed vector competence experiments in which field-collected mosquitoes were orally exposed to an epidemic strain of RVFV via infectious blood meals. 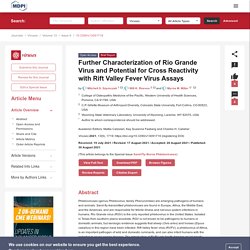 Sand-fly-transmitted phleboviruses are found in Europe, Africa, the Middle East, and the Americas, and are responsible for febrile illness and nervous system infections in humans. Rio Grande virus (RGV) is the only reported phlebovirus in the United States. Isolated in Texas from southern plains woodrats, RGV is not known to be pathogenic to humans or domestic animals, but serologic evidence suggests that sheep (Ovis aries) and horses (Equus caballus) in this region have been infected. TRANSBOUNDARY AND EMERGING DISEASES 12/02/17 Quantifying the potential pathways and locations of Rift Valley fever virus entry into the United States. 1 Introduction The epidemiological landscape continues to be altered by international movement and globalization facilitating the dispersal of pathogens worldwide (Hatcher, Dick, & Dunn, 2012; Tatem, 2006). 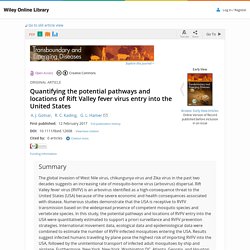 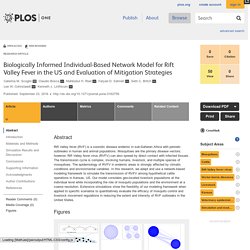 Mosquitoes are the primary disease vectors; however, Rift Valley fever virus (RVFV) can also spread by direct contact with infected tissues. The transmission cycle is complex, involving humans, livestock, and multiple species of mosquitoes. The epidemiology of RVFV in endemic areas is strongly affected by climatic conditions and environmental variables. In this research, we adapt and use a network-based modeling framework to simulate the transmission of RVFV among hypothetical cattle operations in Kansas, US. 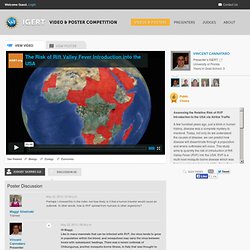 Kofinas, We used a variety of existing frameworks combined with our own unique analysis to determine the relative risk of RVF importation to airports in the US. We started with a map of endemic suitability for RVF in Africa (Clements et al., 2006) and a published model of airline flows (including up to three stops) from Africa to the US. (Huang et al., 2013) We then used the endemic suitability surface and known population densities (Afripop) to generate a map of relative risk of human RVF infection. Assuming that people are most likely to exit Africa via the closest airport, we formed Voronoi polygons around at each airport to partition the African continent. 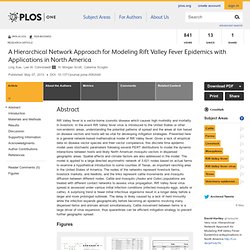 In the event Rift Valley fever virus is introduced to the United States or other non-endemic areas, understanding the potential patterns of spread and the areas at risk based on disease vectors and hosts will be vital for developing mitigation strategies. Presented here is a general network-based mathematical model of Rift Valley fever. Given a lack of empirical data on disease vector species and their vector competence, this discrete time epidemic model uses stochastic parameters following several PERT distributions to model the dynamic interactions between hosts and likely North American mosquito vectors in dispersed geographic areas.