The Most Militarized Universities in America: A VICE News Investigation. An information and intelligence shift has emerged in America's national security state over the last two decades, and that change has been reflected in the country's educational institutions as they have become increasingly tied to the military, intelligence, and law enforcement worlds. 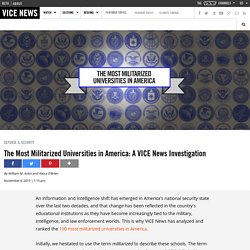 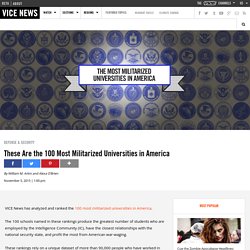 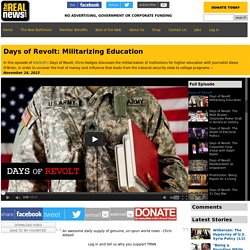 . - Bio Alexa O'Brien is an American journalist reporting on the national security state. Defense Department now reviewing University of Phoenix recruiting. I Pressure continues to mount on the Pentagon and the Department of Veterans Affairs amid widening concern about the quality of education at for-profit colleges and unaccredited institutions, which together have siphoned billions of dollars in taxpayer-supported benefits for veterans and military personnel. 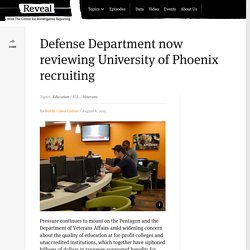 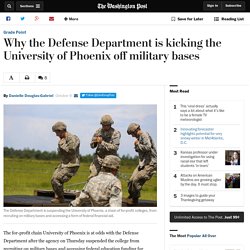 The for-profit chain University of Phoenix is at odds with the Defense Department after the agency on Thursday suspended the college from recruiting on military bases and accessing federal education funding for service members. The decision arrives amid allegations that the university sponsored recruiting events in violation of an executive order preventing for-profit colleges from gaining preferential access to the military. Feds investigating Univ. of Phoenix for possible unfair business practices. Michael Schennum/The Republic The University of Phoenix, an online college, is under investigation by the U.S. 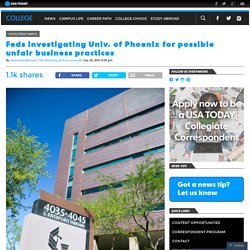 Federal Trade Commission for potential deceptive or unfair business practices, its parent company, Apollo Education Group, said Wednesday. According to CNNMoney, Apollo must release sensitive documents regarding marketing, tuition, billing, accreditation, financial aid, fees, student retention and military recruitment practices, among other things, that go as far back as Jan. 2011. FBI to Colleges: We Want to Work With You - Campus Safety. When an incident occurs, FBI agents and many others in law enforcement are fond of saying, “a command post is no place to exchange business cards.” 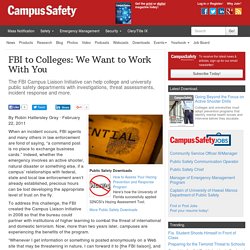 Indeed, whether the emergency involves an active shooter, natural disaster or something else, if a campus’ relationships with federal, state and local law enforcement aren’t already established, precious hours can be lost developing the appropriate level of trust on the fly. To address this challenge, the FBI created the Campus Liaison Initiative in 2008 so that the bureau could partner with institutions of higher learning to combat the threat of international and domestic terrorism. I showed leaked NSA slides at Purdue, so feds demanded the video be destroyed. Barton Gellman is a critically honored author, journalist, and blogger. 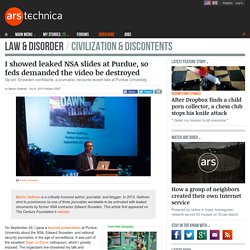 In 2013, Gellman shot to prominence as one of three journalists worldwide to be entrusted with leaked documents by former NSA contractor Edward Snowden. This article first appeared on The Century Foundation’s website. On September 24, I gave a keynote presentation at Purdue University about the NSA, Edward Snowden, and national security journalism in the age of surveillance. Bart Gellman at Purdue: Is it lawful to discuss and display the Snowden documents in universities? Four weeks ago, Bart Gellman of the Century Foundation delivered a keynote address at Purdue University’s “Dawn or Doom?” 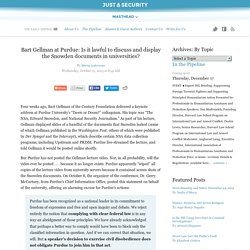 Colloquium. His topic was “The NSA, Edward Snowden, and National Security Journalism.” As part of his lecture, Gellman displayed slides of a handful of the documents that Snowden leaked (some of which Gellman published in the Washington Post; others of which were published by Der Spiegel and the Intercept), which describe certain NSA data collection programs, including Upstream and PRISM. Purdue live-streamed the lecture, and told Gellman it would be posted online shortly. But Purdue has not posted the Gellman lecture video. Purdue has been recognized as a national leader in its commitment to freedom of expression and free and open inquiry and debate. Purdue erases Pulitzer Prize winner's keynote. Purdue University erased a keynote speech in an "overreaction" to regulations by the U.S. 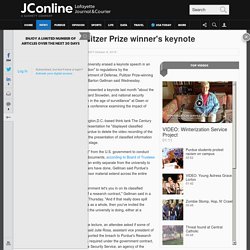 Department of Defense, Pulitzer Prize-winning journalist Barton Gellman said Wednesday. Gellman presented a keynote last month "about the NSA, Edward Snowden, and national security journalism in the age of surveillance" at Dawn or Doom 2, a conference examining the impact of emerging technology on our daily lives. In a story on tcf.org, the website for Washington,D.C. Purdue University Erases Video Of NSA Surveillance Speech To Obey Government Censorship Rules. Welcome to Utah, the NSA's desert home for eavesdropping on America. Drive south down Camp Williams Road, a highway outside Salt Lake City, and your eye is drawn to the left.

A gun-mounted helicopter and other military hardware marks the entrance of the Utah army national guard base. The ice-capped Rockies soar in the distance. To the right there is little to see: featureless scrubland, a metal fence, some warehouses. A small exit – not marked on ordinary maps – takes you up a curving road. A yellow sign says this is military property closed to unauthorised personnel.

Further up the hill, invisible from the highway, you encounter concrete walls, a security boom and checkpoint with guards, sniffer dogs and cameras. Cuts To University's Humanities Program Draw Outcry. New students at the State University of New York's (SUNY) Albany campus can no longer major in French, Italian, Russian, classics or theater. Public colleges and universities around the country are ending low-enrollment programs as state budgets face huge shortfalls.

Mark Schmidt/Courtesy of University at Albany-SUNY hide caption. Disappearing Languages at Albany. The State University of New York at Albany's motto is "the world within reach. " But language faculty members are questioning the university's commitment to such a vision after being told Friday that the university was ending all admissions to programs in French, Italian, Russian and classics, leaving only Spanish left in the language department once current students graduate.

The theater department is also being eliminated. While the last two years have seen many language departments threatened or eliminated, faculty members at Albany said they were stunned that so many languages were being eliminated at the same time and that this was happening at a doctoral university that has prided itself on an international vision. The French program extends to the doctoral level while all the other programs have undergraduate majors as well as many students who take language courses as part of general education but who do not major.

George M. Public Universities Hurt by Humanities Crisis. The reasons for applying such correctives are clear. Many people make eloquent cases for the importance of humanistic learning and argue cogently for its vital role in civic life. A democracy can only be as energetic as the minds of its citizens, and the questions fundamental to the humanities are also fundamental to a thoughtful life (What is the good? The nature of beauty? Minister Bussemaker ontvangt Governance Code Cultuur. 2 oktober 2013. Leger lokt studenten. Securitization, risk management, and the new university. Talk delivered by Amanda Armstrong at the 2015 MLA Subconference. Vancouver, B.C. /Coast Salish Territory. 1/9/15. Britain’s “Emergent Corporate Universities”: Academia in the Service of International Capital and the Military Industrial Complex. LeeJasper : It's an insect spy drone for...

LeeCamp : The perfect image of American... How the Feds Are Recruiting Spies at Campuses Across the US. Photo Credit: Vladimir Gjorgiev/Shutterstock.com June 11, 2014 | Pentagon preparing for mass civil breakdown. A US Department of Defense (DoD) research programme is funding universities to model the dynamics, risks and tipping points for large-scale civil unrest across the world, under the supervision of various US military agencies. Ministry of Defence funding research into online habits. Why Anonymous is going to war with British higher education. NKO Nederlandse oudervereniging Katholiek Onderwijs. How Private Warmongers and the US Military Infiltrated American Universities. Jared Rodrigues academics.