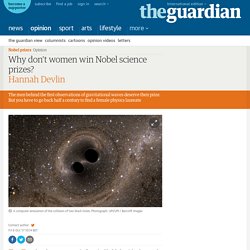 Humans didn’t exist yet when this cataclysmic event took place – yet last year scientists were able to observe the event using a detector made from giant tubes and lasers. The people who came up with that experiment definitely deserve a prize – and this week, rightly, three of them – Rainer Weiss, Barry Barish and Kip Thorne – were awarded the Nobel prize in physics. In fact, all the science recognised this week is awe-inspiring in different ways.

So it seems almost churlish to point out that this year has seen yet another glory parade of “stale white males”. The human cost of the pressures of postdoctoral research. Every scientist knows how difficult it is to get a research paper published; reviewers may take exception to the way a study might have been run, or the way the data are analysed, or how the results have been interpreted. 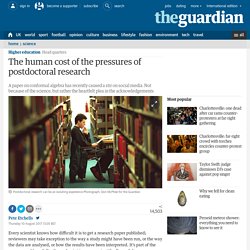 Scientists’ facial appearance affects our perception of their work – Research Digest. By Emma Young Scientists are increasingly encouraged to communicate directly with non-experts, through newspaper and TV interviews, science festivals, online videos, and other channels. 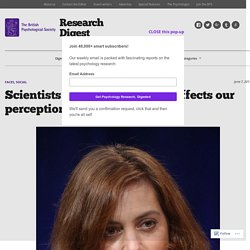 But the quality of their research or ideas alone is not enough to guarantee interest or support, suggests a series of new studies in PNAS. The way the general public responds is also influenced by the scientist’s facial appearance, an important finding, say the researchers, because the public communication of scientific findings shapes beliefs, opinion and policy. To probe the potential impact of first impressions, the researchers, led by William Skylark at the University of Cambridge, first obtained photographs of the faces of hundreds of male and female scientists, chosen at random from physics, genetics/human genetics and biological sciences departments of US and UK universities. More women on selection committees ‘may reduce chances of success’ for female academics. Oxford University to appoint first female vice-chancellor.

The University of Oxford is to appoint its first female vice-chancellor since its records began nearly 800 years ago, after Prof Louise Richardson was nominated for the university’s most senior office. 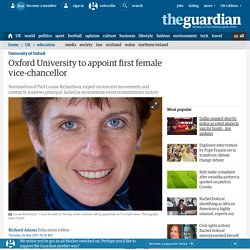 Richardson, currently the principal and vice-chancellor of St Andrews University, is an expert on the growth of terrorist movements. She held a succession of high-profile positions at Harvard until she was appointed to lead St Andrews in 2009. Editor’s note. The unseen women scientists behind Tim Hunt’s Nobel prize. This week, Professor Tim Hunt shocked the scientific community, and pretty much everyone else, with his outrageous comments about his “trouble with girls” and his backwards endorsement of gender-segregated laboratories, which are apparently needed because women are impossibly attracted to him. 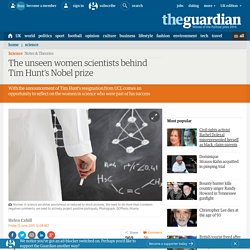 Understandably, commenters have slammed both his sexist comments and his apology. But the most important people in the story have been drowned out: the women scientists who are living proof of just how wrong Hunt is. The field Hunt partly created, as well as his own scientific career, have both flourished due to his intellectual collaborations with women, as well as countless other academic partnerships between men and women, notably in the lab of Sir Paul Nurse. Infographic: 133 university leaders, 20 women. The Royal Society&#039;s lost women scientists. The &quot;Lost Women&quot;: science popularizers and communicators of the 19th century : bioephemera. Today’s Guardian has a very interesting (though long) article by Richard Holmes, author of The Age of Wonder , about the unsung women of science. 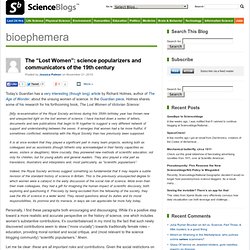 In the Guardian piece, Holmes shares some of his research for his forthcoming book, The Lost Women of Victorian Science: [M]y re-examination of the Royal Society archives during this 350th birthday year has thrown new and unexpected light on the lost women of science. I have tracked down a series of letters, documents and rare publications that begin to fit together to suggest a very different network of support and understanding between the sexes. Six Ways to Keep Women in Science.

First the good news: More women are getting Ph.D.s than men, capping a decades-long march toward parity. 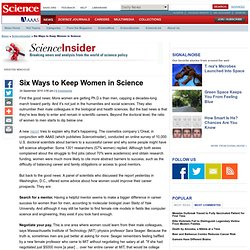 And it's not just in the humanities and social sciences. They also outnumber their male colleagues in the biological and health sciences. But the bad news is that they're less likely to enter and remain in scientific careers. Beyond the doctoral level, the ratio of women to men starts to dip below one. A new report tries to explain why that's happening. But back to the good news: A panel of scientists who discussed the report yesterday in Washington, D.C., offered some advice about how women could improve their career prospects. Boat Race becomes 'the Boat Races' as women and men's university events are combined for 2015. Some reasons gendered science kits may be counterproductive. We want kids to explore science and get excited about learning (and doing) it. 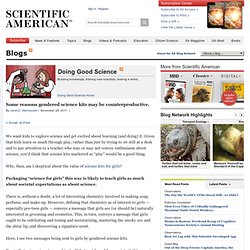 Given that kids learn so much through play, rather than just by trying to sit still at a desk and to pay attention to a teacher who may or may not convey enthusiasm about science, you’d think that science kits marketed as “play” would be a good thing. Women: want to become a writer, artist or academic? Don't bother. Leo Tolstoy: what David Gilmour calls a 'real guy-guy'. 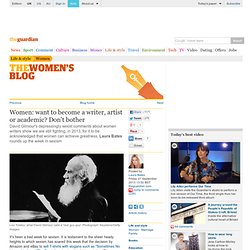 Photograph: Keystone/Getty Images. Women in science: A new study on how male professors discriminate against women in scientific labs. Photo by Andrei Malov/Thinkstock A few years ago, Jason Sheltzer and Joan Smith were at a dinner party, chatting with a physics graduate student. 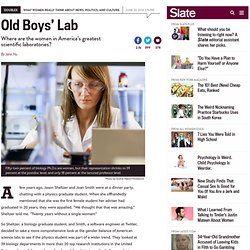 When she offhandedly mentioned that she was the first female student her adviser had graduated in 20 years, they were appalled. “We thought that that was amazing,” Sheltzer told me. “Twenty years without a single woman!” So Sheltzer, a biology graduate student, and Smith, a software engineer at Twitter, decided to take a more comprehensive look at the gender balance of American science labs to see if the physics student was part of a wider trend. The finding isolates just one stage in what researchers call “the leaky pipeline problem”: Though women are well-represented in undergraduate science courses, fewer and fewer women appear at each subsequent level of study.

Why are the media so obsessed with female scientists' appearance? The Observer has an interview with Susan Greenfield this weekend. There are lots of questions it might prompt. Why, for example, has she still not answered Dorothy Bishop’s 2011 question about cause preceding effect when it comes to comments about autism, ADHD and internet use? Is the climate change analogy really all that helpful? Or why are scientists who claim to “march to the beat of their own drum” always a bit annoying?

But it’s hard to get to any of that. Women scientists take to their soapboxes on London's South Bank. On Sunday, London’s South Bank will be flooded with scientists: quantum physicists, large carnivore experts, cancer researchers, climate scientists … They will all be wearing the stereotypical scientist’s lab coat, but only so you can spot them in the crowds – because these scientists won’t look like your "typical" scientist.