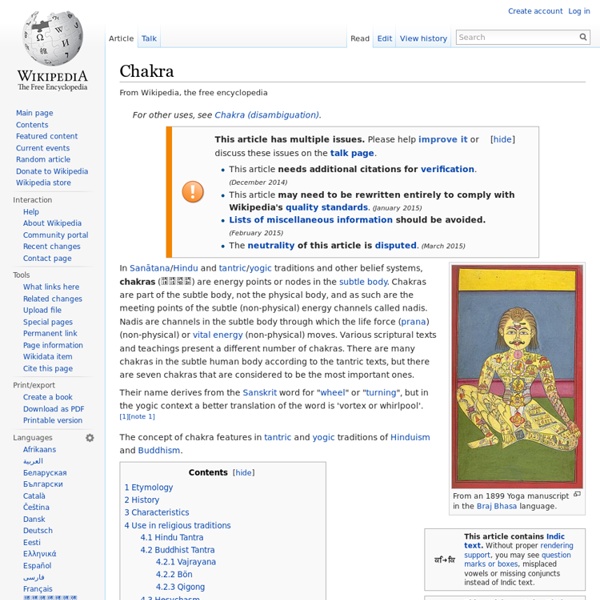 From an 1899 Yoga manuscript in the Braj Bhasa language. Their name derives from the Sanskrit word for "wheel" or "turning", but in the yogic context a better translation of the word is 'vortex or whirlpool'.[1][note 1] The concept of chakra features in tantric and yogic traditions of Hinduism and Buddhism. Etymology[edit] Sanskrit chakra derives from the Proto-Indo-European *kʷekʷlos; its cognates include Greek kuklos, Lithuanian kaklas, Tocharian B kokale, and English "wheel," as well as "circle" and "cycle".[2] M. "Circle," used in a variety of senses, symbolising endless rotation of shakti.A circle of people. The linguist Jorma Koivulehto wrote (2001) of the annual Finnish Kekri celebration, having borrowed the word from early Indo-Aryan Languages.[5] History[edit] Characteristics[edit] The texts and teachings present different numbers of chakras. "In fact, there is no "standard" system of the chakras. The following features are common: Use in religious traditions[edit] Hindu Tantra[edit]

Meridians - The Life-force Energy Highway. Meridians are the final component of the human energy body and is fully explained and discussed in depth in "The Human Energy Body Course". The easiest way to describe them is is to look at them as the energy equivalent of the arteries and veins which carry your blood around your body, in other words they are energy channels. These energy channels carry your life-force, or Ki, around your body. Your major meridians route the energy lengthways through the body, connecting with all of the body's major organs. There are also other smaller energy channels, minor meridians which criss-cross throughout the body, connecting all the parts together so that Ki can flow everywhere.

Chakras Chakras Chakra means Wheel in Sanskrit. Consciousness and energy move from one frequency to another in spiraling fashion. The body has energy centers that look like spinning wheels and are called Chakras. They allow energy to flow from one part of the body to another. As with all things in our reality, they are linked to sound, light and color. Sacred Centers - The Chakras Portal - Pathways for Personal and Global Transformation - Chakras, Videos, Workshops and Books by Anodea Judith. The Chakra System originated within the yoga traditions of India, most specifically the Tantric period, circa 500 – 1000 AD. Therefore, yoga is an ideally designed practice to not only train your mind and body, but to access your chakras. The word yoga means yoke or union, and one can see how the chakra system represents the structural aspect of that yoke — the means through which mind and body, mortal and divine, connect. In that way yoga is the prime tool for accessing this sacred architecture of the soul. The postures listed below are grouped according to chakra. They are a guideline and by no means exhaustive.

The Meaning of the Pineal Gland The pineal gland, a pine-cone shaped gland of the endocrine system, is a highly essential part of the brain necessary to our survival. It is often associated with the third eye or the Ajna chakra, when activated, leads one to higher realms of consciousness. The third eye gives us perception of the universe around us through the five senses. Section 1. Learning How to Be a Community Leader What is a community leader? Are you one?Why should you be a community leader? A Primer on Major and Minor Chakra Chakras are a concept originating from Hindu texts and used in Hindu practices. Their name derives from the Sanskrit word for “wheel” or “turning”. Chakras are a concept referring to wheel-like vortices which, according to traditional Indian medicine, are believed to exist in the surface of the etheric double of man. From their Hindu origin, the understanding of Chakras and the Chakra system is now in widespread and used through all systems that deal with energy medicine.

We live in a world where we have to hide to make... - StumbleUpon Bodhisattva Quotes "At night I dream that you and I are two plants that grew together, roots entwined and that you know..." follow me → Newer Older <div id="about_container" style="display:block;border-top: 1px #000000 dashed;"><a name="me"></a><p class="avatar"><img alt="Bodhisattva Quotes"src=" /></p><p><script type="text/javascript"> var gaJsHost = (("https:" == document.location.protocol) ?