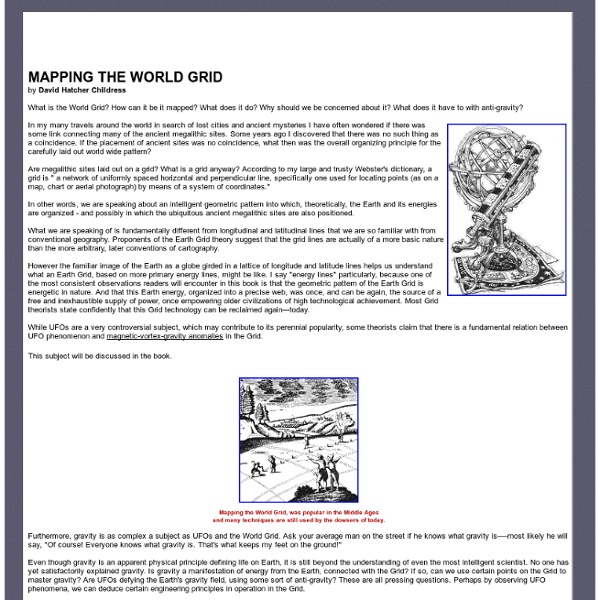 MAPPING THE WORLD GRID by David Hatcher Childress What is the World Grid? How can it be it mapped? What does it do? In my many travels around the world in search of lost cities and ancient mysteries I have often wondered if there was some link connecting many of the ancient megalithic sites. Are megalithic sites laid out on a grid? In other words, we are speaking about an intelligent geometric pattern into which, theoretically, the Earth and its energies are organized - and possibly in which the ubiquitous ancient megalithic sites are also positioned. What we are speaking of is fundamentally different from longitudinal and latitudinal lines that we are so familiar with from conventional geography. However the familiar image of the Earth as a globe girded in a lattice of longitude and latitude lines helps us understand what an Earth Grid, based on more primary energy lines, might be like. This subject will be discussed in the book. Mapping the World Grid, was popular in the Middle Ages R.

The Planetary Grids ThePlanetaryGridsANATOMY OF GAIA (EARTH) ByAbjini Arraíz Editor's Note: On August 20, 2005, Luis Prada channeled Ashtar of the Ashtar Command to receive instructions for the planting of a quartz crystal in the Mojave Desert. This was the third channeling by telepathic reception he did that was actually recorded. The previous two were done unrecorded for the planting of a crystal in Mount Shasta that was done on Sunday August 14, 2005 by a Hispanic group led by Luis Prada. You may download this recording. Original in Spanish, translation by Luis E. The planetary grid concept is not new, in antiquity Plato spoke about this in his work Timaeus as "the ideal body of cosmos" and explains the grid as the synthesis of the platonic solids. From the birth of our planet the grid that covered the Earth was formed over the matrix of the sacred geometry of the five platonic solids, as emanation of creation. From the Book: "Awakening to Zero Point" by Gregg Braden Fig. 1. Fig. 2.

Earth's Grid System, Becker-Hagens, Ley Lines, Hartmann Net, Curry Lines - Science and Pseudoscience Earth's Grid Systems Science and Pseudoscience Topography, is the study of Earth's surface shape and features or those of planets, moons, and asteroids. Planetary Energetic Grid Theory Planetary Energetic Grid Theory falls under the heading of pseudoscience. Plato recognized grids and their patterns, devising a theory that the Earth's basic structure evolved from a simple geometric shapes to more complex ones. Becker-Hagens Grid Bill Becker and Bethe Hagens discussed the code of the Platonic Solids' positions on Earth, ascribing this discovery to the work of Ivan P. Becker and Hagens' attention was drawn to this research through the work of Chris Bird, who punished "Planetary Grid" in the New Age Journal in May 1975. They proposed that the planetary grid map outlined by the Russian team Goncharov, Morozov and Makarov is essentially correct, with its overall organization anchored to the north and south axial poles and the Great Pyramid at Gizeh. We see Dr. According to Dr. Ley Lines Examples

Global Issues : social, political, economic and environmental issues that affect us all 10 Vile Vortices Around The World from DeepInfo Website Figure 1: Vile Vortices Overview - from Ivan Sanderson's 1972 article in Saga magazine, "The Twelve Devil’s Graveyards Around the World" plotted ship and plane disappearances worldwide, focusing attention on 12 areas. Is the earth a gigantic crystal that resonates at 7 Hz with harmonic focal points at specific equidistant points? One of the best summaries is "Anti-Gravity and the World Grid" by David Childress. The Bermuda Triangle & Japan's Devil's Sea are considered anomalies, where unexplained phenomena occur, such as disappearing ships & planes, & radios & compasses that stop working. Why are ancient Megaliths placed at specific equidistant points, such as Mohenjo-Daro, Cairo, Peru, Easter Island, Zimbabwe, and Borneo, to name a few. If the Earth is mapped out as a icosahedron (or dodecahedron) Grid, these are all equidistant geometric points (Vortices) of intersecting (Ley) lines. List of Numbered Places Numbered List of Vortices on World Grid Map from Becker-Hagens

Strange Artifacts, The Stone Spheres of Costa Rica Introduction One of the strangest mysteries in archaeology was discovered in the Diquis Delta of Costa Rica. Since the 1930s, hundreds of stone balls have been documented, ranging in size from a few centimetres to over two meters in diameter. Some weigh 16 tons. Almost all of them are made of granodiorite, a hard, igneous stone. These objects are monolithic sculptures made by human hands. Balls in the Courtyard of National Museum, San José, Costa Rica. The spheres number over 300. The stones may have come from the bed of the , to where they were transported by natural processes from sources of parent material in the Talamanca mountains. Debunking the "Mystery" of the Stone Balls by John W. The stone balls of Costa Rica have been the object of pseudoscientific speculations since the publication of Erich von Däniken's Chariots of the Gods in 1971. Hundreds of stone balls have been documented in Costa Rica, ranging in size from a few centimeters to over two meters in diameter. John W. Books

Social influence Morton Deutsch and Harold Gerard described two psychological needs that lead humans to conform to the expectations of others. These include our need to be right (informational social influence), and our need to be liked (normative social influence).[3] Informational influence (or social proof) is an influence to accept information from another as evidence about reality. Informational influence comes into play when people are uncertain, either because stimuli are intrinsically ambiguous or because there is social disagreement. Types[edit] Social Influence is a broad term that relates to many different phenomena. Kelman's varieties[edit] There are three processes of attitude change as defined by Harvard psychologist Herbert Kelman in his 1958 paper in the Journal of Conflict Resolution.[2] The purpose of defining these processes was to help determine the effects of social influence: for example, to separate public conformity (behavior) from private acceptance (personal belief). Status[edit]

H. P. Blavatsky, "The Esoteric Character of the Gospels" pt 2 Studies in Occultism by H. P. Blavatsky Theosophical University Press Online Edition Part II The word Chrestos existed ages before Christianity was heard of. Thus in Aeschylus (Cho. 901) we read of pythochresta the "oracles delivered by a Pythian God" (Greek-English Lexicon) through a pythoness; and Pythochrestos is the nominative singular of an adjective derived from chrao (Eurip. All this is evidence that the terms Christ and Christians, spelt originally Chrest and Chrestians [chrestianoi] (22) were directly borrowed from the Temple terminology of the Pagans, and meant the same thing. The secular meaning of Chrestos runs throughout the classical Greek literature pari passu with that given to it in the mysteries. The words [chresen oikistera] used by Pindar (pp. 4-10) mean "the oracle proclaimed him the colonizer." Now Chrestos, as already said, is a term applied in various senses. There is still another and far more weighty proof that the name Christos is pre-Christian.

Malaysia Malaysia ( i/məˈleɪʒə/ mə-LAY-zhə or Malaysia has its origins in the Malay Kingdoms present in the area which, from the 18th century, became subject to the British Empire. The first British territories were known as the Straits Settlements, whose establishment was followed by the Malay kingdoms becoming British protectorates. The territories on Peninsular Malaysia were first unified as the Malayan Union in 1946. The country is multi-ethnic and multi-cultural, which plays a large role in politics. Etymology "Malaysia" used as a label for the Malay Archipelago on a 1914 map from a United States atlas Before the onset of European colonization, the Malay peninsula was known natively as Tanah Melayu ('Malay Land').[25][26] Under the racial classification created by European scholars the natives of Maritime Southeast Asia were grouped into a single category, the Malay race. History A Famosa fortress in Malacca was built by the Portuguese in the 16th century. Government and politics