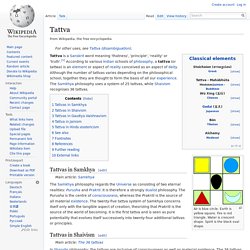 Earth is yellow square. Fire is red triangle. Water is crescent shape. Spirit is the black oval shape. Tattva is a Sanskrit word meaning 'thatness', 'principle', 'reality' or 'truth'.[1] According to various Indian schools of philosophy, a tattva (or tattwa) is an element or aspect of reality conceived as an aspect of deity. Tattvas in Samkhya[edit] Kinds of Kundalini Risings. According to Traditional Kundalini Science, Kundalini Shakti constantly strives to attain a lasting Oneness experience by elevating to Bindu, the pinnacle where she can reside in union with Pure Consciousness. 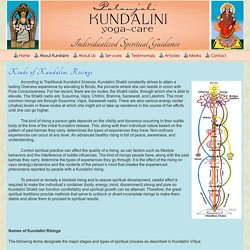 For her ascent, there are six routes, the Shakti nadis, through which she is able to elevate. The Shakti nadis are: Susumna, Vajra, Chitrini, Brahma, Saraswati, and Lakshmi. The most common risings are through Susumna, Vajra, Saraswati nadis. There are also various energy center (chakra) levels in these routes at which she might act or take up residence in the course of her efforts until she can go higher. KUNDALINI SADHANA. Basava Dharma - Philosophy. Chennabasavanna and his contemporaries under the guidance ofBasavanna, discussed about human anatomy and physiology. 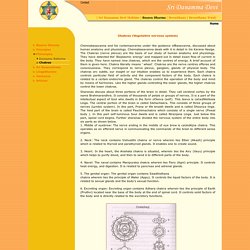 Chennabasavanna deals with it in detail in his Karana Hasige. The Chakras (nerve plexus) are the basis of our study of human anatomy and physiology. They have detected the' Bioplasmic energy' and mapped out in detail exact flow of current in the body. They have named nine chakras, which are the centres of energy. A brief account of them is given here. Sharanas discuss about three portions of the brain in detail. 2. 3. 4. 5. Brahmarandhra. Brahma-Randhra: The Evolving Center in the Brain. By Michael Bradford The developing study of the Kundalini phenomenon has brought out many different points of view as to the nature of this mysterious mechanism, its modes of functioning and the way in which it operates in the physical body. 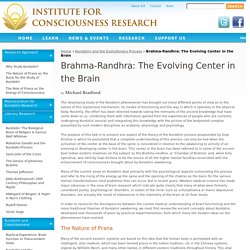 Recently, the effort has been directed towards taking the remnants of the ancient knowledge that have come down to us, combining them with information gained from the experiences of people who are currently undergoing Kundalini arousal and integrating this knowledge with the picture of the body/mind complex presented by such modern disciplines as anatomy, physiology and psychology. 7 Chakras: Kundalini Yoga. Jain cosmology. Jain cosmology is the description of the shape and functioning of the physical and metaphysical Universe (loka) and its constituents (such as living beings, matter, space, time etc.) according to Jainism, which includes the canonical Jain texts, commentaries and the writings of the Jain philosopher-monks. 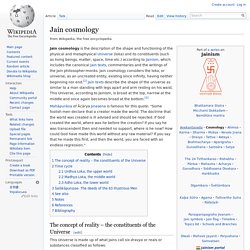 Jain cosmology considers the loka, or universe, as an uncreated entity, existing since infinity, having neither beginning nor end.[1] Jain texts describe the shape of the universe as similar to a man standing with legs apart and arm resting on his waist. This Universe, according to Jainism, is broad at the top, narrow at the middle and once again becomes broad at the bottom.[2] Mahāpurāṇa of Ācārya Jinasena is famous for this quote: "Some foolish men declare that a creator made the world. Loka. Vishvarupa of Vishnu as the Cosmic Man with the three realms: heaven - Satya to Bhuvar loka (head to belly), earth - Bhu loka (groin), underworld - Atala to Patala loka (legs). 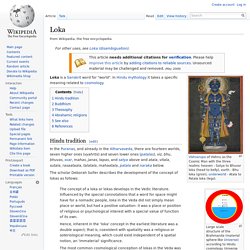 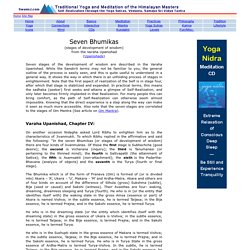 While the Sanskrit terms may not be familiar to you, the general outline of the process is easily seen, and this is quite useful to understand in a general way. It shows the way in which there is an unfolding process of stages in enlightenment. Note that the first aspect of realization of the Self is in stage four, after which that stage is stabilized and expanded. In practical terms, this means the sadhaka (seeker) first seeks and attains a glimpse of Self-Realization, and only later becomes firmly implanted in that Realization.

Varaha Upanishad, Chapter IV: On another occasion Nidagha asked Lord Ribhu to enlighten him as to the characteristics of Jivanmukti. The Bhumika which is of the form of Pranava (Om) is formed of (or is divided into) Akara – ‘A’, Ukara – ‘U’, Makara - ‘M’ and Ardha-Matra.