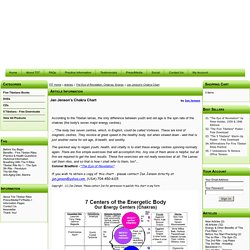 "The body has seven centres, which, in English, could be called Vortexes. These are kind of magnetic centres. They revolve at great speed in the healthy body, but when slowed down - well that is just another name for old age, ill-health, and senility. The quickest way to regain youth, health, and vitality is to start these energy centres spinning normally again. If you wish to obtain a copy of this chart - please contact Jan Jenson directly at jan.jenson@yahoo.com (USA) 704-450-6115 Copyright - (c) Jan Jenson. Awakening your Seven Major Chakras. The placement of the seven chakras are depicted in this picture along with their color Most of us here in India are familiar with Chakras to the extent that we know they exist in our body. 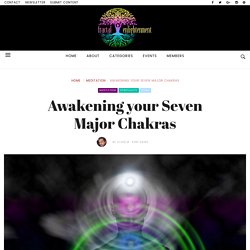 But we don’t really get in to the specifics of where the Chakras are located and what do they do? Chakras are well known in the East, and are fast gaining popularity in the West. But as we in the East have moved away from our roots, the knowledge of Chakras is no longer taught to us in our system of education, instead we learn a horse load of stuff that will never come to much use. The knowledge of Chakras is an alternative science, that has common grounds with other ancient healing tools namely, Tibetan Bön, buddhist tantra Vajrayana, Chinese Qigong and even Islamic Sufism. Now that should be a good enough introduction to each of the seven main chakras. The meaning of each of the seven major chakras in the human body.

What does one get when they activate their Chakras or balance their Chakras? Chakras: 7 year development life-cycles. Click into the image to see it bigger. 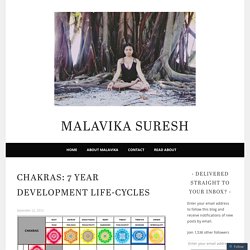 This is a table of human development of the chakras. I did not invent this table, you can find it here (the original text is in russian but you could put it into google translator if you are not russian speaking). The table was designed to gives a graphic illustration of the seven year cycle of human development according to the Vedic Treaties Chakravidya. The table shows the ideal progression of an individual, but of course, we should also take into account the specific characteristics of each individual in particular. However, the general principles are outlined as follows: According to this philosophy, our life moves in 7 year cycles corresponding with each of the 7 chakra centers located in our light body. Within these 7 year cycles we also climb another 7-chakra ladder (corresponding to the top row of chakras on our table and the columns they represent) which takes us from The Root chakra to the Crown Chakra. The Root Chakra: Fear Take care, m. Why You Need to Know About Your Chakras.

Whether or not you acknowledge your chakras (shah-KRA), they are in your body. 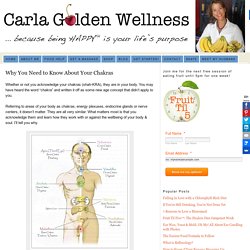 You may have heard the word “chakra” and written it off as some new age concept that didn’t apply to you. Referring to areas of your body as chakras, energy plexuses, endocrine glands or nerve centers, it doesn’t matter. They are all very similar. What matters most is that you acknowledge them and learn how they work with or against the wellbeing of your body & soul. I’ll tell you why. Endocrine Glands The word “chakra” means “wheel” in Sanskrit, the ancient language of Hinduism. Carolyn Myss in her book Anatomy of the Spirit has done a marvelous job at overlaying the chakra system with both the Christian and Jewish mystical traditions to make brilliant correlations having been unrealized before only by semantics.