3HO Kundalini Yoga - A Healthy, Happy, Holy Way of Life. Kundalini Yogas FAQ. Version 1.0, May 1996 Copyright Kurt Keutzer, 1996 (keutzer@eecs.berkeley.edu) The author grants the right to copy and distribute this file, provided it remains unmodified and original authorship and copyright is retained.The author retains both the right and intention to modify and extend this document. 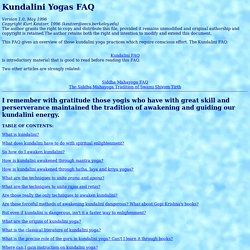 This FAQ gives an overview of those kundalini yoga practices which require conscious effort. The Kundalini FAQ: Kundalini FAQ is introductory material that is good to read before reading this FAQ. Two other articles are strongly related: Siddha Mahayoga FAQThe Siddha Mahayoga Tradition of Swami Shivom Tirth I remember with gratitude those yogis who have with great skill and perserverance maintained the tradition of awakening and guiding our kundalini energy. What is kundalini? What does kundalini have to do with spiritual enlightenment? So how do I awaken kundalini? Kundalini Yogas FAQ. Kundalini Yoga - Hinduism Practices Kundalini Yoga. In Hinduism, kundalini refers to the psychic or cosmic energy that lies dormant in most people. 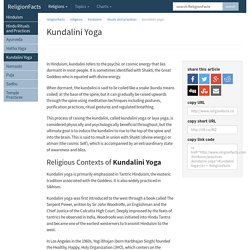 It is sometimes identified with Shakti, the Great Goddess who is equated with divine energy. When dormant, the kundalini is said to lie coiled like a snake (kunda means coiled) at the base of the spine, but it can gradually be raised upwards through the spine using meditation techniques including postures, purification practices, ritual gestures and regulated breathing. Yoga Journal. Sivananda Saraswati. Sivananda Saraswati (8 September 1887 – 14 July 1963) was a Hindu spiritual teacher and a proponent of Yoga and Vedanta. 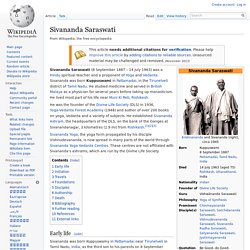 Sivananda was born Kuppuswami in Pattamadai, in the Tirunelveli district of Tamil Nadu. He studied medicine and served in British Malaya as a physician for several years before taking up monasticism. He lived most part of his life near Muni Ki Reti, Rishikesh. He was the founder of the Divine Life Society (DLS) in 1936, Yoga-Vedanta Forest Academy (1948) and author of over 200 books on yoga, Vedanta and a variety of subjects.

He established Sivananda Ashram, the headquarters of the DLS, on the bank of the Ganges at Sivanandanagar, 3 kilometres (1.9 mi) from Rishikesh.[1][2][3] Learn About Kundalini Yoga: Poses, Asanas & Sequences. Recently Added in Kundalini Yoga Kundalini Yoga: Nabhi Kriya to Balance the Third Chakra Align your third chakra and balance your center of energy with this asana set to focus on your core and breathing techniques to stimulate abdominal muscles. 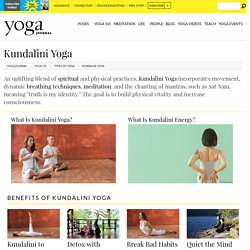 Opening the Chakras and Consciousness. The free flow of energy flows up through the chakras leads to an expanded state of consciousness—but is it safe? 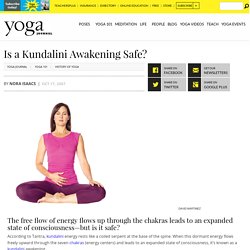 According to Tantra, kundalini energy rests like a coiled serpent at the base of the spine. When this dormant energy flows freely upward through the seven chakras (energy centers) and leads to an expanded state of consciousness, it’s known as a kundalini awakening. Yoga Style Profile: Get to Know Kundalini Yoga. An uplifting blend of spiritual and physical practices, Kundalini Yoga incorporates movement, dynamic breathing techniques, meditation, and the chanting of mantras, such as Sat nam (“I am truth”). 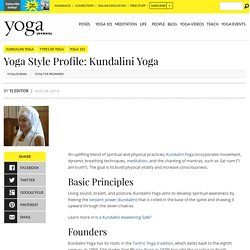 The goal is to build physical vitality and increase consciousness. Basic Principles Using sound, breath, and posture, Kundalini Yoga aims to develop spiritual awareness by freeing the serpent power (kundalini) that is coiled in the base of the spine and drawing it upward through the seven chakras. Learn more in Is a Kundalini Awakening Safe? Founders Kundalini Yoga has its roots in the Tantric Yoga tradition, which dates back to the eighth century.