10 Vile Vortices Around The World 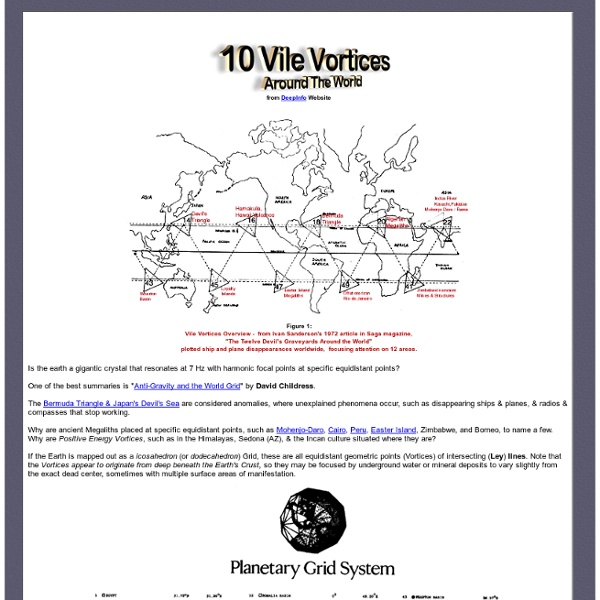 from DeepInfo Website Figure 1: Vile Vortices Overview - from Ivan Sanderson's 1972 article in Saga magazine, "The Twelve Devil’s Graveyards Around the World" plotted ship and plane disappearances worldwide, focusing attention on 12 areas. Is the earth a gigantic crystal that resonates at 7 Hz with harmonic focal points at specific equidistant points? One of the best summaries is "Anti-Gravity and the World Grid" by David Childress. The Bermuda Triangle & Japan's Devil's Sea are considered anomalies, where unexplained phenomena occur, such as disappearing ships & planes, & radios & compasses that stop working. Why are ancient Megaliths placed at specific equidistant points, such as Mohenjo-Daro, Cairo, Peru, Easter Island, Zimbabwe, and Borneo, to name a few. If the Earth is mapped out as a icosahedron (or dodecahedron) Grid, these are all equidistant geometric points (Vortices) of intersecting (Ley) lines. List of Numbered Places Numbered List of Vortices on World Grid Map from Becker-Hagens

Mapping The World Grid MAPPING THE WORLD GRID by David Hatcher Childress What is the World Grid? How can it be it mapped? What does it do? Why should we be concerned about it? In my many travels around the world in search of lost cities and ancient mysteries I have often wondered if there was some link connecting many of the ancient megalithic sites. Are megalithic sites laid out on a grid? In other words, we are speaking about an intelligent geometric pattern into which, theoretically, the Earth and its energies are organized - and possibly in which the ubiquitous ancient megalithic sites are also positioned. What we are speaking of is fundamentally different from longitudinal and latitudinal lines that we are so familiar with from conventional geography. However the familiar image of the Earth as a globe girded in a lattice of longitude and latitude lines helps us understand what an Earth Grid, based on more primary energy lines, might be like. This subject will be discussed in the book. Planetary Grid R. S.

The Planetary Grids ThePlanetaryGridsANATOMY OF GAIA (EARTH) ByAbjini Arraíz Editor's Note: On August 20, 2005, Luis Prada channeled Ashtar of the Ashtar Command to receive instructions for the planting of a quartz crystal in the Mojave Desert. Original in Spanish, translation by Luis E. The planetary grid concept is not new, in antiquity Plato spoke about this in his work Timaeus as "the ideal body of cosmos" and explains the grid as the synthesis of the platonic solids. From the birth of our planet the grid that covered the Earth was formed over the matrix of the sacred geometry of the five platonic solids, as emanation of creation. From the Book: "Awakening to Zero Point" by Gregg Braden Fig. 1. For a long time these planetary grids were forgotten until in the last years through the remembering of some and the channeling of others it was started to be spoken of the existence of a Christed grid or spiritual grid that will support us in the change of the planetary consciousness we are living in today.