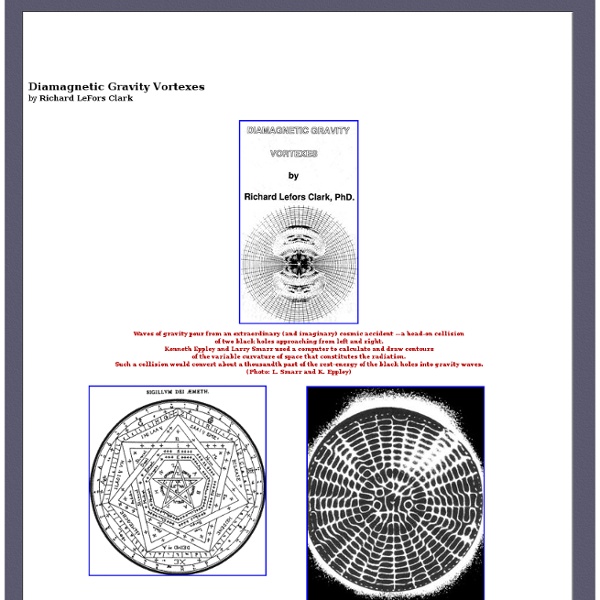 Diamagnetic Gravity Vortexes by Richard LeFors Clark Waves of gravity pour from an extraordinary (and imaginary) cosmic accident —a head-on collision of two black holes approaching from left and right. Kenneth Eppley and Larry Smarr used a computer to calculate and draw contours of the variable curvature of space that constitutes the radiation. Such a collision would convert about a thousandth part of the rest-energy of the black holes into gravity waves. (Photo: L. THE EARTH GRID, HUMAN LEVITATION AND GRAVITY ANOMALIES Knowledge of the Earth Grid or "crystalline Earth" is very ancient and has been utilized by a number of civilizations. While the subject of the Earth Grid has by now been covered in a considerable number of publications, one point in the Grid, marked by a long and strange history, at the eastern tip of Lake Ontario, is worth special mention. Daniel Home is the world famous levitator of the 19th century who lived in this Lake Ontario Grid point area. Diagram 8 and 9

10 Vile Vortices Around The World from DeepInfo Website Figure 1: Vile Vortices Overview - from Ivan Sanderson's 1972 article in Saga magazine, "The Twelve Devil’s Graveyards Around the World" plotted ship and plane disappearances worldwide, focusing attention on 12 areas. Is the earth a gigantic crystal that resonates at 7 Hz with harmonic focal points at specific equidistant points? One of the best summaries is "Anti-Gravity and the World Grid" by David Childress. The Bermuda Triangle & Japan's Devil's Sea are considered anomalies, where unexplained phenomena occur, such as disappearing ships & planes, & radios & compasses that stop working. Why are ancient Megaliths placed at specific equidistant points, such as Mohenjo-Daro, Cairo, Peru, Easter Island, Zimbabwe, and Borneo, to name a few. If the Earth is mapped out as a icosahedron (or dodecahedron) Grid, these are all equidistant geometric points (Vortices) of intersecting (Ley) lines. List of Numbered Places Numbered List of Vortices on World Grid Map from Becker-Hagens

How to Decalcify and Detoxify the Pineal Gland Anna Hunt, Staff WriterWaking Times The pineal gland, an endocrine gland located in the brain, is said to be the seat of the soul. Also referred to as the Third Eye, this small gland is believed to be involved in reaching higher levels of consciousness, acting as a gateway to dimensions beyond our brain-created reality. To learn more about the pineal gland, see: What is the Pineal Gland? For the people that seek to fully activate their spiritual potential and tap into the power of the pineal gland, one must begin by strengthening its function though detoxification and proper nutrition. Researchers are finding that in many people, due to our poor diet with pesticide and chemical-laden foods and environmental toxins such as fluoride in our water, the pineal gland and our entire bodies are becoming exposed to many more toxins and nano-organisms than ever before. 1. The pineal gland already produces the hormone melatonin, which affects the body’s circadian rhythms of waking and sleeping. 2.

Mapping The World Grid MAPPING THE WORLD GRID by David Hatcher Childress What is the World Grid? How can it be it mapped? What does it do? Why should we be concerned about it? In my many travels around the world in search of lost cities and ancient mysteries I have often wondered if there was some link connecting many of the ancient megalithic sites. Are megalithic sites laid out on a grid? In other words, we are speaking about an intelligent geometric pattern into which, theoretically, the Earth and its energies are organized - and possibly in which the ubiquitous ancient megalithic sites are also positioned. What we are speaking of is fundamentally different from longitudinal and latitudinal lines that we are so familiar with from conventional geography. However the familiar image of the Earth as a globe girded in a lattice of longitude and latitude lines helps us understand what an Earth Grid, based on more primary energy lines, might be like. This subject will be discussed in the book. Planetary Grid R. S.

Brain Wave Entrainment and Hypnosis During hypnosis the brain shows a characteristic sequence of brain wave activity. This can now be artificially reproduced through the use of audio tones; a process known as brain wave entrainment. If you are in a particular state, for example, very anxious, then you will produce a unique 'signature' of brainwaves. This applies equally to other states, such as learning and the focused concentration of competitive sport. These are states that can take a long time and a lot of physical effort to attain. This page is going to show you how this is done. Firstly, we are going to review the different and the states that are generally associated with them. Secondly, we will look at that have been observed in people while undergoing hypnosis. Thirdly we will look at and how it has been used to produce individual and groups of brain waves to modify peoples' state. Fourthly we will look at brain wave entrainment specifically with regard to . Types of Brain Waves ~200Hz ~100Hz 38 - 90Hz 40Hz 12 - 38Hz 12Hz

Beautiful Gardens From Around The World – 13 pictures | World inside pictures 1.Boboli Gardens The Bobobli Gardens, behind the Pitti Palace in Florence, Italy were groundbreaking in the early 18th century for their open design. 2.Rikugien Gardens ”Rikugien literally means ‘six poems garden’ and reproduces in miniature 88 scenes from famous poems. 3.Claude Monet Gardens in Giverny The pool with nympheas, in Claude Monet’s garden at Giverny. 4.Butchart Gardens, Victoria, B.C. The Butchart Gardens at Todd Inlet, which lie around 14 miles from Victoria B.C., covers more than 55 acres of the 130 acre Butchart Estate. 5.Kirstenbosch Botanical Gardens Table Mountain looms in the distance of this vista from Kirstenbosch Botanical Gardens in South Africa. 6.Yu Gardens – Shanghai The 400-year-old Yu Gardens were built in the Ming Dynasty during the reign of Emperor Jia Jin, and restored in the 1960s. 8.Exbury Gardens – New Forest, England Amazing colors reflect on the calm waters of Exbury Lake.

The Planetary Grids ThePlanetaryGridsANATOMY OF GAIA (EARTH) ByAbjini Arraíz Editor's Note: On August 20, 2005, Luis Prada channeled Ashtar of the Ashtar Command to receive instructions for the planting of a quartz crystal in the Mojave Desert. Original in Spanish, translation by Luis E. The planetary grid concept is not new, in antiquity Plato spoke about this in his work Timaeus as "the ideal body of cosmos" and explains the grid as the synthesis of the platonic solids. From the birth of our planet the grid that covered the Earth was formed over the matrix of the sacred geometry of the five platonic solids, as emanation of creation. From the Book: "Awakening to Zero Point" by Gregg Braden Fig. 1. For a long time these planetary grids were forgotten until in the last years through the remembering of some and the channeling of others it was started to be spoken of the existence of a Christed grid or spiritual grid that will support us in the change of the planetary consciousness we are living in today.

It's Big, It's Bad Ass And It's Still Not Yet Ready. The $1.42 Million Bugatti 16 C Galibier. ShareThis Bugatti has been teasing us with their 16 cylinder Galibier sedan for over 2 years now with what is said to be the world's most powerful four door luxury sedan. Still not given the green light for production, the French automaker launched this promotional video (with the most pretentious voiceover I've ever heard) a month ago: Rumored to have been ready for purchase by 2012, Bugatti head Wolfgang Durheimer was reportedly disappointed with the car’s levels of comfort and performance, forcing engineers to go back to the drawing board. The most recent photos of the Bugatti Galibier prototype: The Galibier concept, first unveiled in 2010 at the Geneva Auto Show, is a five-door hatchback with sleek styling and incredibly luxury laden custom interior. Concept drawings: Following the footsteps of the Veyron, the Galibier features a W16 engine displacing 8.0L. Details: Bugatti says the car’s exterior is inspired by the torpedo-like Type 35, while also evoking cues from the Type 57.