AUTONOMOUS HOUSING: How to create an ECOVILLAGE 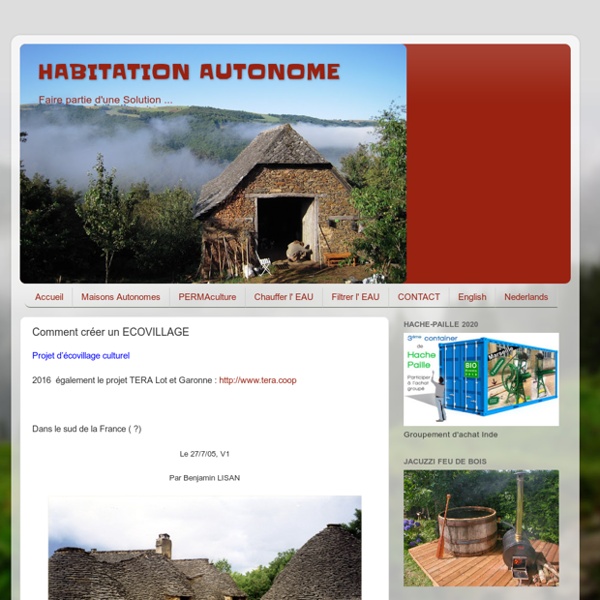 The New Generation of Self-Created Utopias THE EAST WIND COMMUNITY is hidden deep in the Ozarks of southern Missouri, less than 10 miles from the Arkansas border, surrounded by jagged hills and tawny fields. Getting there requires traversing country roads that rise, dip and twist through chicken-wire-fenced farmsteads and grazing pastures cluttered with rusty agricultural equipment until you reach 1,145 acres of largely undeveloped highland forest, where cedar, oak, pine and mulberry create a dense canopy. Beneath that are 27 buildings and structures, including four large dormitories, nine personal shelters, a kitchen and dining facility, an automobile shop, a nut butter manufacturing plant and a cold-storage warehouse, all built over the years by the community since its founding in 1974. Outside, farm animals — six piglets, 50 chickens, several dozen brown-and-white cows — crunch through the carpet of winter leaves. THE UNITED STATES HAS been a laboratory for experiments in alternative living since its founding.

Organic Art-itecture: Dream Home Inspiration From Mexico Javier Senosiain is a Mexican architect who designs amazingly beautiful homes that look like something out of a fantasy world. He works with principles of Architectura Organica (Organic Architecture), a way of integrating buildings with the surrounding landscape and inspiring those who live there to be in tune with nature. The idea is to create an area adapted for humans, according to our environmental, physical and psychological needs. Senosiain’s designs are curved, light, and above all creative: the forms and materials are so unusual and colourful in one of his works, you are literally living inside a piece of art. His designs include whales, snakes, sharks, shells, and even peanuts. None of them use any straight lines, and they are made from a material called ferro-cement (cement, sand and mortar, poured on to shaped steel rods).

Highest Good Energy: Sustainable Energy infrastructure and conservation methods are foundational to the creation of self-sufficient and self-propagating teacher/demonstration communities, villages, and cities to be built around the world. This page is an open source and free-shared guide to the setup and expansion of net-zero (100% sustainable) energy infrastructure during the construction of teacher/demonstration hub food infrastructure, village models, the Duplicable City Center, and beyond. Once on the property, we will further evolve the Highest Good energy® foundations and open source resources with additional implementation and research results of an even broader diversity of energy-saving strategies and alternative energy infrastructure methodologies.

Dancing Rabbit Ecovillage: Living Abundantly on 10% In 1996, attracted to the low cost of land and the lenient zoning restrictions, a group of young Stanford graduates raised money from friends and family and headed to northeastern Missouri to set up what is now known as Dancing Rabbit Ecovillage, a successful intentional community and 270-acre community land trust. Their idea was to “move beyond protesting ecological destruction towards finding a positive alternative for ecological living.” Sound familiar? Almost 20 years later, Dancing Rabbit (DR) is a fully functioning ecovillage with around 60 full-time members who live happily on just 10% of the resources the average American consumes. Earlier this month, Transition US and Share Exchange had the opportunity to co-host DR’s Executive Director Ma’ikwe Ludwig for the inaugural event in her national speaking tour.

Resources: GEN Global Ecovillage Network Europe Annual Reports Find out what's been happening around the network with our annual reports. GEN Europe Annual Report 2017 (PDF) Solution Library The GEN Solution Library is a crowdsourced index of solutions relating to all aspects of community living: the social, cultural, ecological, economic and whole-system elements of what it means to live together in a sustainable way.

Joining Forces for More Sustainable Communities - Nature and Environment The alienation and affluenza so prevalent in our society can sometimes seem overwhelming. Happily, we’re aware of some amazing alternatives. As MOTHER’s readers dig in and put their homesteading skills into practice, they realize that the work of self-reliance often goes better in community — more DIO, “Do It Ourselves,” than DIY. Partnering with neighbors, friends, local governments and faith groups, they’re applying self-reliant skills to create paradigm-changing approaches to community living. We’re calling these communities “Homestead Hamlets,” a term that arose from an inspiring article in our April/May 2014 issue about Hawley Hamlet in Lincoln, Nebraska.

Badulina - Fellowship for Intentional Community Mission Statement Our Badulina welcome song: You and me, we’re gonna live freestyle, At least for a while, till the day that we die, I know we shall find a place under the sky Where Love is the law and the truth cannot lie, Who you’ve been where you going Have you coming from far?