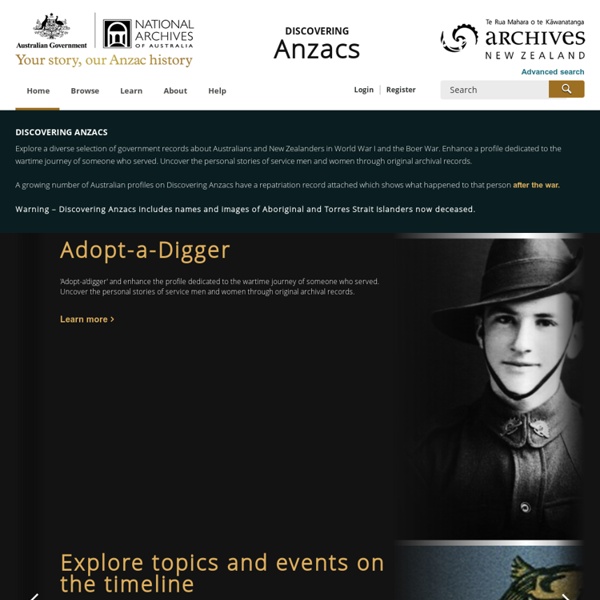 First World War 1914–18 Australian troops in the Lone Pine trenches. A02022 A02022 Australian troops in the Lone Pine trenches. AWM A02022 Australia’s involvement in the First World War began when Britain and Germany went to war on 4 August 1914, and both Prime Minister Joseph Cook and Opposition Leader Andrew Fisher, who were in the midst of an election campaign, pledged full support for Britain. The outbreak of war was greeted in Australia, as in many other places, with great enthusiasm. The first significant Australian action of the war was the Australian Naval and Military Expeditionary Force’s (ANMEF) landing on Rabaul on 11 September 1914. Collections in Melbourne: A Guide to Commonwealth Government Records - Collections in Melbourne: A Guide to Commonwealth Records Celia Blake Published by the National Archives of Australia This is guide number 8 in the series of research guides published by the National Archives. The Melbourne office of the National Archives of Australia holds a wealth of material that will interest both professional and family historians.

Papua New Guinea Patrol Reports Reports from government patrols are a major source of primary information on Papua New Guinea’s colonial-era history. Patrol officers and other officials wrote detailed documents reporting on all aspects of the work carried out by the patrols. The reports give first-hand accounts on many topics, from first contact with remote Highland villages, to census counts, tax collection, health care, justice, labor recruiting, plantations, missionaries, anthropological descriptions, tribal warfare, languages, and more. The reports in this collection date primarily from the post-World War II era of Papua New Guinea, up through 1975, when PNG gained independence from Australia; a few pre-War reports are also included. The documents in this collection were digitized from microforms held at the University of California, with the permission of the National Archives of Papua New Guinea.

Digitised WWI Victorian newspapers A major project commemorating World War I has digitised 216 WWI-era Victorian community newspapers and made them available online via the National Library of Australia’s Trove portal. Victorians everywhere can now explore the stories of their communities and family and friends who lived and fought through the Great War. This digitised collection contains thousands of stories waiting to be found. These newspapers of the day provide, in their original format, news and public debate; letters from soldiers, sailors and nurses; death notices, images and more.

1 Historical background Recognising Aboriginal and Torres Strait Islander Peoples in the Constitution: Report of the Expert Panel Millions of non-indigenous Australians have joined with us in the search for a better relationship based on equity and justice. Australians at every level of our society have put up their hands to be counted as supporters of a nation that holds as its core value a society based on mutual respect, tolerance and justice. ... I am convinced that true reconciliation that is not based upon truth will leave us as a diminished nation. And I ... am convinced that such reconciliation is possible.

Early world maps Antiquity Babylonian Imago Mundi (c. 600 BCE) A Babylonian world map, known as the Imago Mundi, is commonly dated to the 6th century BCE.[1][2] The map as reconstructed by Eckhard Unger shows Babylon on the Euphrates, surrounded by a circular landmass showing Assyria, Urartu (Armenia)[3] and several cities, in turn surrounded by a "bitter river" (Oceanus), with seven islands arranged around it so as to form a seven-pointed star. The accompanying text mentions seven outer regions beyond the encircling ocean. The descriptions of five of them have survived:[4]

Service records Discovering Anzacs – The National Archives of Australia and Archives New Zealand commemorate the Centenary of Anzac. The National Archives holds records about service in the Australian defence forces from Federation in 1901. Find out how to access the records we hold relating to service with the: Australian Army (Army) Royal Australian Navy (RAN) Royal Australian Air Force (RAAF) The five funniest moments in Australian history History, let's be blunt, is hilarious. It's hilarious for the same reason life itself is hilarious: it's filled with weirdos and idiots screwing everything up in the worst ways possible. But the beauty of history as a comedic resource is that it all happened ages ago, so you don't have to pretend to feel sorry for the people it happened to.

Public Domain Collections: Free to Share & Reuse That means everyone has the freedom to enjoy and reuse these materials in almost limitless ways. The Library now makes it possible to download such items in the highest resolution available directly from the Digital Collections website. Search Digital Collections No permission required. No restrictions on use. Trove - Pictures, photos, objects Search photographs, negatives, artworks, drawings, posters, postcards and other pictures, as well as physical objects such as puzzles, instruments and clothing. Contribute your photos to Trove! Find out how to do it. Worst mass murder of police in Australian history remembered Updated Police have gathered in a remote forest near the southern New South Wales town of Braidwood to mark 150 years since the worst mass murder of police officers in Australian history. On January 9, 1867, four special constables assigned to catch the notorious Clarke Gang were ambushed and killed near Jinden, New South Wales.