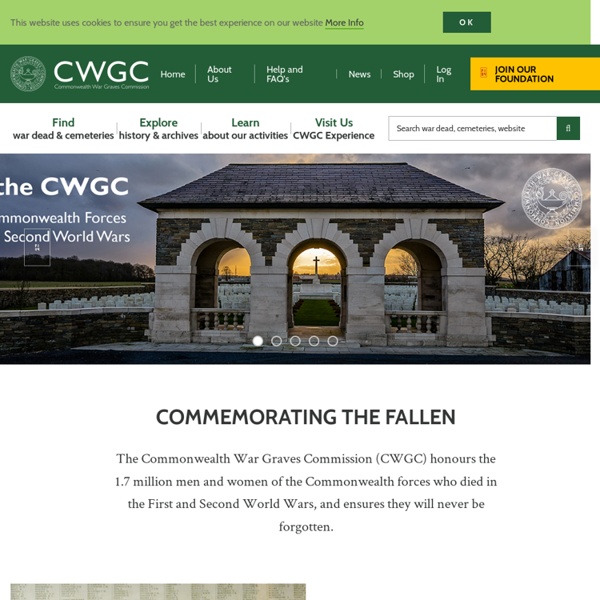 Australians on the Western Front 1914-1918 Shellshock By 1914 British doctors working in military hospitals noticed patients suffering from "shell shock". Early symptoms included tiredness, irritability, giddiness, lack of concentration and headaches. Eventually the men suffered mental breakdowns making it impossible for them to remain in the front-line. Some doctors argued that the only cure for shell-shock was a complete rest away from the fighting. Philip Gibbs, a journalist on the Western Front, later recalled: "The shell-shock cases were the worst to see and the worst to cure. Between 1914 and 1918 the British Army identified 80,000 men (2% of those who saw active service) as suffering from shell-shock. Official figures said that 304 British soldiers were court-martialled and executed.

Essendon Historical Society From trench to tomb: The unknown warrior's journey 11 November 2010Last updated at 02:12 By Mario Cacciottolo BBC News The tomb, in London's Westminster Abbey The unknown warrior was carried from a French battlefield 90 years ago, to be laid to rest among kings and statesmen in Westminster Abbey. In 1916, a Church of England clergyman serving at the Western Front in World War I spotted an inscription on an anonymous war grave which gave him an idea. That moment of inspiration would blossom into a worldwide ceremony that is still being replicated in the 21st Century - the grave of an unknown warrior, symbolising those who made the ultimate sacrifice for their country. The Reverend David Railton caught sight of the grave in a back garden at Armentieres in France in 1916, with a rough cross upon which was pencilled the words "An Unknown British Soldier". In August 1920 Mr Railton wrote to the Dean of Westminster, Herbert Ryle, to suggest having a nationally recognised grave for an unknown soldier. Continue reading the main story “Start Quote

Gallipoli and the Anzacs Trove - Pictures, photos, objects Search photographs, negatives, artworks, drawings, posters, postcards and other pictures, as well as physical objects such as puzzles, instruments and clothing. Contribute your photos to Trove! Find out how to do it. 1,256 photos have been contributed to Trove via Flickr this month. Trove's Pictures, photos, objects zone owes much of its existence to one of the National Library's first discovery services, Picture Australia. Picture Australia was originally launched in September 2000 and, at that time, was a unique and ground breaking service, bringing together digitised images from cultural heritage collections around Australia for not only all Australians to see but also the world. It began with less than half a million images from seven institutions and, over the years, grew to two million images and more than 70 contributors. Picture Australia has been absorbed into Trove.

Australian War Memorial - homepage Digitised WWI Victorian newspapers | State Library Victoria A major project commemorating World War I has digitised 216 WWI-era Victorian community newspapers and made them available online via the National Library of Australia’s Trove portal. Victorians everywhere can now explore the stories of their communities and family and friends who lived and fought through the Great War. This digitised collection contains thousands of stories waiting to be found. The newspapers can be freely and easily searched by anyone at anytime and anywhere, using keywords, dates or geographical regions. The digitised newspapers cover the period 1914–19. The digitisation of these newspapers has been supported by the State Library of Victoria, National Library of Australia, Public Libraries Victoria Network, local councils and historical societies. Includes Ararat, Ballan, Ballarat, Clunes, Colac, Creswick, Daylesford, Dunolly, Maldon, Maryborough, Talbot Includes Chillingollah, Lake Boga, Mildura, Ouyen, Swan Hill, Ultima

First World War 1914–18 Australian troops in the Lone Pine trenches. A02022 A02022 Australian troops in the Lone Pine trenches. AWM A02022 Australia’s involvement in the First World War began when Britain and Germany went to war on 4 August 1914, and both Prime Minister Joseph Cook and Opposition Leader Andrew Fisher, who were in the midst of an election campaign, pledged full support for Britain. The outbreak of war was greeted in Australia, as in many other places, with great enthusiasm. The first significant Australian action of the war was the Australian Naval and Military Expeditionary Force’s (ANMEF) landing on Rabaul on 11 September 1914. On 25 April 1915 members of the Australian Imperial Force (AIF) landed on Gallipoli in Turkey with troops from New Zealand, Britain, and France. Throughout 1916 and 1917 losses on the Western Front were heavy and gains were small. For Australia, the First World War remains the costliest conflict in terms of deaths and casualties. Sources and further reading: C.E.W. J.