15 Movies from Your Childhood to Rewatch with Your Kids 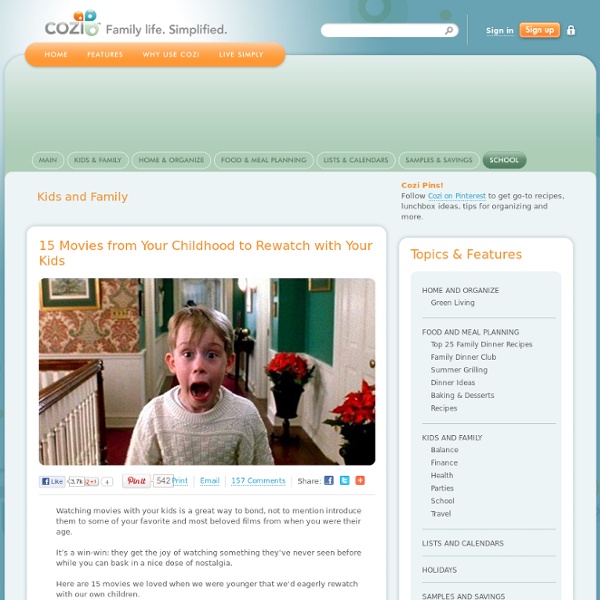 Watching movies with your kids is a great way to bond, not to mention introduce them to some of your favorite and most beloved films from when you were their age. It’s a win-win: they get the joy of watching something they've never seen before while you can bask in a nice dose of nostalgia. Here are 15 movies we loved when we were younger that we'd eagerly rewatch with our own children. 15. Hook (1991) A fun twist on the well-known Peter Pan story, Hook explores what would happen if the boy who never grew up actually did. 14. This movie is a handy little lesson about the importance of looking after your siblings. 13. Your kids will get a kick out of this monster mashup. 12. The original movie starring Gene Wilder is a little on the trippy side, but kids will enjoy seeing the magical wonders of Willy Wonka's chocolate factory. 11. Every kid has fantasized about having the house all to himself so he can eat whatever he wants and watch countless hours of television. 10. 9. 8. 7. 6. 5. 4. 3.

10 Great Horror Movies You Probably Missed Christian Toto is a veteran journalist and film critic whose movie reviews are heard on WTOP radio and “The Dennis Miller Show.” He blogs on film at What Would Toto Watch? Horror fans can’t be pleased about the state of the blood-soaked genre. Top Ten Films 1930-2009 2019 1. LEAVING NEVERLAND (Dan Reed) 2. APOLLO 11 (Todd Douglas Miller) 3. Top 100 Best Acoustic Songs Ever -The Greatest of All Time Here is a list of the best acoustic songs ever written. Acoustic music has come a long way over the years, so many are “oldies” and many are “newies.” We are basing this list off of historical album sales, the ever so objective factor of acoustic-ness, but mostly how easily they make us cry. They are mostly arranged in alphabetical order, by song – so make sure you check out the whole list! Feel free to give your input on suggestions, changes, discards, or songs we may have forgot about. Also, for those interested in a serious path to learning guitar, please see our trusted partner, Guitar Tricks:

10 SXSW 11 Films Weve Seen and Highly Recommend With over 120 films to choose from in just nine days at the 2011 South by Southwest Film Festival, even the most experienced planner will be unable to take in all of them. That is just simple math. Sometimes you just have to take a page from Neil ... The 30 Best Films of the Decade We’re all in that humanistic mode of evaluating our lives – coming up on the end of the year and the last time a zero will be the third digit on our calendars. We’re all (from Variety to Cat Fancy) also waxing expert on what films were the best of the best of the best of the past ten years. Which is why there is an unnavigable sea of opinion polluting the internet right now. Neil and I thought, ‘If everyone else is doing it, why can’t we? And why not do it better?” You may ask (since I’m forcing you to rhetorically), “How can giving your opinion be better than everyone else’s tepid version of an almost-arbitrary-seeming list?”

15 Books You Should Have Read in 2010 - Culture - GOOD - StumbleUpon Image by Jane Mount, Courtesy 20x200 Yes, we read Freedom this year and yes, it was good. As Esquire put it, it “was one great slab of a book, at a time when most books have given up on greatness.” But there were other books in 2010, books that had to compete for our ever more challenged attention spans and won.

Watch Movies with no limits 33 Movies To Watch When You're Sad, Glum Or Bummed Out We all have days that don’t feel quite right. Maybe you’re bored, sick or lethargic. Perhaps you just got some bad news that has left you feeling slack-jawed & useless. Maybe you’re worried about your sister, or fighting with your husband. Redsn0w 0.9.9b8 Released Published on 11-03-2011 02:49 PM Redsn0w 0.9.9b8 is fully compatible with the iOS 5.0.1 Beta released to developers yesterday. Yesterday, Apple pushed out the iOS 5.0.1 Beta to developers which has fixed numerous bugs in iOS 5 and brings the beloved multitasking gestures back to the original iPad.

Google+ Google+ (pronounced and sometimes written as Google Plus /ˈɡuːɡəl plʌs/) is a social networking and identity service[3][4] that is owned and operated by Google Inc. Google has described Google+ as a "social layer" that enhances many of its online properties, and that it is not simply a social networking website, but also an authorship tool that associates web-content directly with its owner/author.[5] It is the second-largest social networking site in the world after Facebook. 540 million monthly active users are part of the Identity service site, by interacting socially with Google+'s enhanced properties, like Gmail, +1 button, and YouTube comments.[6] In October 2013, Google counted 540 million active users who used at least one Google+ service, of which 300 million users are active in "the stream".[1][7][8] History[edit]

Google+ is truly powerful Google Chrome Store has new Google+ apps “Simply Amazing times” below is an link list of all the best apps for Google+ from the Chrome Store Google+ is awesome Congo Planet - News, Music, Videos, Pictures from the Congo