It's Time to Read! - Book reviews and news 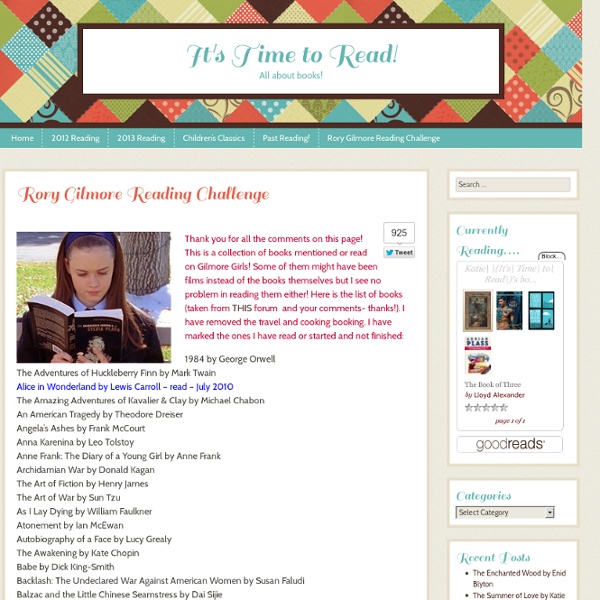 Thank you for all the comments on this page! This is a collection of books mentioned or read on Gilmore Girls! Some of them might have been films instead of the books themselves but I see no problem in reading them either! Here is the list of books (taken from THIS forum and your comments- thanks!).

» Overclock Your Reading Speed This is a guest post from Kim Roach of The Optimized Life. In today’s Information Age, reading is now a prerequisite for success in life. In fact, many presidents, including Kennedy, have required their staff to take speed reading lessons. Brian Tracy, a best-selling author, points out that just 1 hour per day of reading will make you an international expert in your chosen field within 7 years. If you’re looking to increase your learning rate while decreasing your effort, speed reading is a method you should consider studying. The Brain’s Power Speed reading actually began as part of military training to identify enemy war planes. But what was interesting about this method of military training is that it began to unveil the idea that the brain could process more things visually than was previously thought. What many people don’t realize is that the mind becomes bored when it’s not constantly stimulated. 1. In fact, I would suggest skipping parts of a book that you don’t need. 2. 3. 4. 5.

MindShift | How we will learn MindShift explores the future of learning in all its dimensions. We examine how learning is being impacted by technology, discoveries about how the brain works, poverty and inequities, social and emotional practices, assessments, digital games, design thinking and music, among many other topics. We look at how learning is evolving in the classroom and beyond.We also revisit old ideas that have come full circle in the era of the over scheduled child, such as unschooling, tinkering, playing in the woods, mindfulness, inquiry-based learning and student motivation. We report on shifts in how educators practice their craft as they apply innovative ideas to help students learn, while meeting the rigorous demands of their standards and curriculum. MindShift has a unique audience of educators, tinkerers, policy makers and life-long learners who engage in meaningful dialogue with one another on our sites. Contact the us by email.

» 20 Amazing and Essential Non-fiction Books to Enrich Your Library Post written by Leo Babauta. Follow me on Twitter. I’m an avid reader of fiction and just love a novel that transports me, that is so gripping that I can’t put it down. But I also enjoy a good non-fiction book, from self-help stuff to philosophy to biographies to just about anything that makes me think. After the warm reception of my post on novels (50 Amazing and Essential Novels to Enrich Your Library), a number of people asked for a list of non-fiction as well. I was hesitant to do this as there are so many classic non-fiction texts, from the Greeks to philosophers through the ages to biographies of amazing people to first-hand accounts of surviving wars and much more. But then I decided not to be comprehensive. So this list is far, far from being authoritative or comprehensive. This list is just a few of my favorites. Your Money or Your Life, by Joe Dominguez and Vicki Robins. Bonus update — I forgot a few that I really want to add to this list. So what else should be on this list?

10 Essential Books for Book Nerds What makes a book nerd? Reading a lot of books — and liking to talk about said books — is a major requirement, of course, but there’s often something a little more nebulous involved: book nerds are the kinds of people who get a little thrill when walking into a bookstore, who press volumes into their friends’ hands with serious promises of life changing moments, who are fascinated by following the many tangled threads through authors and literature, happily wandering wherever they might lead. Robin Sloan’s recently published Mr. Penumbra’s 24-Hour Bookstore is a book for such people — if you can’t already tell from the title. If you count yourself among them (or are looking for a gift for the same), we’ve put together a list of books you might want to consider taking a look at. Click through to read through our list of essential books for book nerds — and since you’re probably not a true book nerd if you’re satisfying with ten, add your own picks to our list in the comments! Mr.

History Myths Debunked The Greatest Books of All Time, As Voted by 125 Famous Authors “Reading is the nourishment that lets you do interesting work,” Jennifer Egan once said. This intersection of reading and writing is both a necessary bi-directional life skill for us mere mortals and a secret of iconic writers’ success, as bespoken by their personal libraries. The Top Ten: Writers Pick Their Favorite Books asks 125 of modernity’s greatest British and American writers — including Norman Mailer, Ann Patchett, Jonathan Franzen, Claire Messud, and Joyce Carol Oates — “to provide a list, ranked, in order, of what [they] consider the ten greatest works of fiction of all time– novels, story collections, plays, or poems.” Of the 544 separate titles selected, each is assigned a reverse-order point value based on the number position at which it appears on any list — so, a book that tops a list at number one receives 10 points, and a book that graces the bottom, at number ten, receives 1 point. In introducing the lists, David Orr offers a litmus test for greatness:

the impossible cool. (Almost) Everything You Need to Know about Culture in 10 Books by Maria Popova What the limits of the universe have to do with the history of jazz and the secret of happiness. Last week, I was reorganizing my library and realized that some of my favorite books are ones that introduced me to subjects I either admired but knew little about or was unaware of altogether. Long before there was The Visual Miscellaneum or Data Flow, there was Graphis diagrams: The graphic visualization of abstract data — a seminal vision for the convergence of aesthetics and information value, originally published in 1974, which codified the conventions of contemporary data visualization and information design. Images courtesy of insect54 As a lover of jazz, I was thrilled for this month’s release of The History of Jazz — Ted Gioia‘s fascinating and ambitious cultural biography of the genre, though such classification is incredibly reductionist, that permeated just about every facet of creative culture, social dynamics and politics. Share on Tumblr

STREET ART UTOPIA » We declare the world as our canvasSTREET ART UTOPIA » We declare the world as our canvas 7 Must-Read Books on the Art & Science of Happiness by Maria Popova From Plato to Buddha, or what imperfection has to do with the neuroscience of the good life. If you, like me, are fascinated by the human quest to understand the underpinnings of happiness but break out in hives at the mere mention of self-help books, you’re in luck: I’ve sifted through my personal library, a decade’s worth of obsessive reading, to surface seven essential books on the art and science of happiness, rooted in solid science, contemporary philosophy and cross-disciplinary insight. From psychology and neuroscience to sociology and cultural anthropology to behavioral economics, these essential reads illuminate the most fundamental aspiration of all human existence: How to avoid suffering and foster lasting well-being. The question of what makes us happy is likely as old as human cognition itself and has occupied the minds of philosophers, prophets and scientists for millennia. Human rationality depends critically on sophisticated emotionality. Donating = Loving

At Melville’s Tomb | Howard Owens Often beneath the wave, wide from this ledgeThe dice of drowned men’s bones he saw bequeathAn embassy. Their numbers as he watched,Beat on the dusty shore and were obscured. And wrecks passed without sound of bells,The calyx of death’s bounty giving backA scattered chapter, livid hieroglyph,The portent wound in corridors of shells. Then in the circuit calm of one vast coil,Its lashings charmed and malice reconciled,Frosted eyes there were that lifted altars;And silent answers crept across the stars. Compass, quadrant and sextant contriveNo farther tides . . . High in the azure steepsMonody shall not wake the mariner.This fabulous shadow only the sea keeps. – Hart Crane I first read Hart Crane in a poetry anthology. Crane may be one of the most difficult modern poets to comprehend. Crane called this the “logic of metaphor:” . . . “At Melville’s Tomb” is one of the best illustrations of Crane’s point. Crane is by no means an easy poet to comprehend, but none of the truly great poets ever are.

7 Essential Books on Optimism by Maria Popova What the love of honey has to do with ancient wisdom, our capacity for hope, and the future of technology. Every once in a while, we all get burned out. Sometimes, charred. Antoine de Saint-Exupéry’s The Little Prince, one of our must-read children’s books with philosophy for grown-ups, is among the most poetic and hopeful reflections on human existence ever penned. Here is my secret. Published in 1943, translated into 180 languages since and adapted to just about every medium, Exupéry’s famous novella is one of the best-selling books of all time. Martin Seligman is a Brain Pickings regular — known for his research on learned helplessness and revered as the father of positive psychology, his Authentic Happiness is one of the 7 most essential books on the art and science of happiness, and his Flourish made our 2011 Summer Reading List. In a world brimming with cynicism, it’s a rare and wonderful occasion to find an oasis of sincerity and optimism. Full review here.