50 Best Sociology Books of All Time 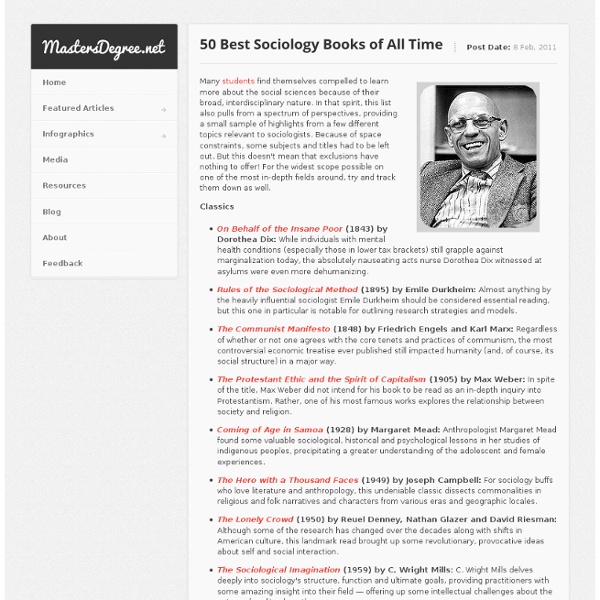 Many students find themselves compelled to learn more about the social sciences because of their broad, interdisciplinary nature. In that spirit, this list also pulls from a spectrum of perspectives, providing a small sample of highlights from a few different topics relevant to sociologists. Because of space constraints, some subjects and titles had to be left out. But this doesn’t mean that exclusions have nothing to offer! For the widest scope possible on one of the most in-depth fields around, try and track them down as well. Classics

Revues.org : portail de revues en sciences humaines et sociales 55 great books under 200 pages Having no time doesn’t mean you have to stop reading. Just pick up the shorter book. Half Price Books, one of America’s favorite independent booksellers, asked their customers to recommend books under 200 pages that would be a perfect companion of a book lover. The image below displays top 55 recommendations. Of Mice and Men by John Steinbeck is accompanied by Neil Gaiman’s new book The Ocean at the End of the Lane, or The Girl on the Fridge by Etgar Keret. What book under 200 pages would you add to your reading list? Click or tap on the image below to see it in full resolution. Top article Best short books you can read in less than three hours. More infographics to check out: About Ola Kowalczyk Collecting bits and pieces about books and libraries in digital age.

OpenEdition : portail de ressources électroniques en sciences humaines et sociales Don DeLillo DeLillo has described his fiction as being concerned with "living in dangerous times",[3] and in a 2005 interview declared, "Writers must oppose systems. It's important to write against power, corporations, the state, and the whole system of consumption and of debilitating entertainments [...] I think writers, by nature, must oppose things, oppose whatever power tries to impose on us."[4] Early life and Influences[edit] DeLillo was born on November 20, 1936 and grew up in a working-class Italian Catholic family, from Molise, in an Italian-American neighborhood of the Bronx in New York City, not far from Arthur Avenue.[5] Reflecting on his childhood in The Bronx, DeLillo later described how he was "...always out in the street. As a teenager, DeLillo wasn't interested in writing until taking a summer job as a parking attendant, where hours spent waiting and watching over vehicles led to a reading habit. Work[edit] 1970s[edit] 1980s[edit] 1990s[edit]

Color Psychology by David Johnson Like death and taxes, there is no escaping color. It is ubiquitous. Yet what does it all mean? Why are people more relaxed in green rooms? Colors often have different meanings in various cultures. Black Black is the color of authority and power. White Brides wear white to symbolize innocence and purity. Red The most emotionally intense color, red stimulates a faster heartbeat and breathing. The most romantic color, pink, is more tranquilizing. Blue The color of the sky and the ocean, blue is one of the most popular colors. Green Currently the most popular decorating color, green symbolizes nature. Yellow Cheerful sunny yellow is an attention getter. Purple The color of royalty, purple connotes luxury, wealth, and sophistication. Brown Solid, reliable brown is the color of earth and is abundant in nature. Colors of the Flag In the U.S. flag, white stands for purity and innocence. Food for Thought While blue is one of the most popular colors it is one of the least appetizing.

The Black Company Cover of the first novel in the series, "The Black Company". The Black Company is a series of fantasy novels by author Glen Cook. The series combines elements of epic fantasy and dark fantasy as it follows an elite mercenary unit, The Black Company, through roughly forty years of its approximately five hundred year history. Novels[edit] Main chronology[edit] The Books of the North[edit] The Books of the South [edit] The Books of the Glittering Stone[edit] Bleak Seasons (Main Annalist: Murgen) —April 1996She Is the Darkness (Murgen) —September 1997Water Sleeps (Sleepy) —March 1999Soldiers Live (Croaker: the duty is passed off to Shukrat and Arkana of the Voroshk in the last chapter, implying thenceforth they will share the duty of Annalist) —July 2000 Spin-offs[edit] The Silver Spike (Case) —September 1989 Omnibus Editions[edit] Science Fiction Book Club hardcover omnibus editions[edit] Tor Fiction softcover omnibus editions[edit] Short stories[edit] To be released[edit] Plot summary[edit] [edit]

The Steel Remains The Steel Remains (2008) is a fantasy novel by Richard K. Morgan. It is the first fantasy book by Morgan, a noted science fiction author known for the Takeshi Kovacs trilogy and the standalone novels Market Forces and Black Man. The Steel Remains is the first book of a planned trilogy named A Land Fit For Heroes, a series title also used by Phillip Mann. A Land Fit For Heroes was originally the working title of the first volume, and was retained as the series title after first Morgan and the UK publisher, and then the US publisher, decided to use the current title The Steel Remains.[1] The sequel, The Cold Commands, was published in 2011. The third, The Dark Defiles is due in August 2013. Plot[edit] Almost ten years after the Human-Kiriath Alliance repelled the invading Scaled Folk in a terrible war, three of the war heroes still have difficulty adjusting to the uneasy peace and the renewed conflict between the northern League and the Yhelteth Empire. Release details[edit] References[edit]

China Miéville China Tom Miéville (/ˈtʃaɪnə miˈeɪvəl/; born 6 September 1972) is an English fantasy fiction author, comic writer and academic. He is fond of describing his fiction as "weird fiction" (after early 20th-century pulp and horror writers such as H. P. Early life[edit] Born in Norwich, Miéville was brought up in Willesden, northwest London, and has lived in the city since early childhood. Education[edit] Miéville attended Oakham School, a co-educational independent school in Oakham, Rutland, for two years. Miéville studied for a BA degree in social anthropology at Clare College, Cambridge, graduating in 1994, and gained both a Masters' degree and PhD in international relations from the London School of Economics in 2001. Literary influences[edit] In 2010, Miéville made his first foray into writing for RPGs with a contribution to the Pathfinder Roleplaying Game supplement Guide to the River Kingdoms.[5] Miéville works to move fantasy away from J. Honours[edit] Politics[edit] Bibliography[edit]