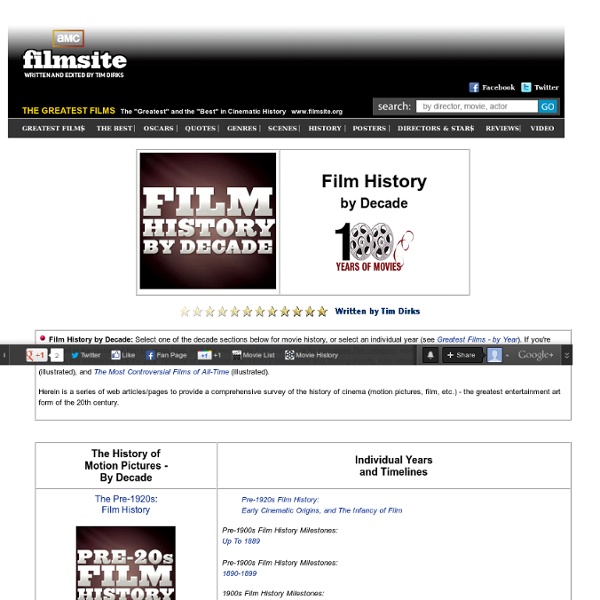 25 Spectacular Movies You (Probably) Haven't Seen Midnight in Paris Woody Allen’s latest places starving writer Owen Wilson in Paris with his fiancée, Rachel McAdams. Searching for inspiration for his incomplete novel, Owen begins taking strolls around the city at night where he discovers an unexpected group of people. I wish I could be more specific, but it would ruin the surprise. Know that it is brilliant, witty and full of mystique. 92% on Rotten Tomatoes (RT). Let the Right One In Arabic calligraphy The Arabic alphabet ARABIC is written from right to left. There are 18 distinct letter shapes, which vary slightly depending on whether they are connected to another letter before or after them. There are no "capital" letters.

Top 10 Shocking Documentaries Movies and TV As a visual medium, documentaries frequently succeed in portraying the unimaginable far better then any book alone could do. Beaming everything from the consequences of child abuse to the horrors of nuclear warfare into the homes of millions, the following infamous documentaries shock the viewer and challenge perceptions. Please note: Almost all the videos featured contain graphic and disturbing content, relevant to the topic at hand. Warning: some of these documentaries contain disturbing footage. Amazing sculptures that look like they are in motion At first glance these objects look like they are in motion, almost like every object is falling down, especially the “strawberry blanket”. In reality they are actually natural materials, like feathers, fruits and flowers, attached to nylon threads. Sculptor Claire Morgan from Belfast is the creator of this magnificent art work. She has among other things achieved a first class degree in Sculpture from Northumbria University.

Best Film Speeches and Monologues Contemptuous talk-show radio host in Dallas Texas, Jewish radio personality Barry Champlain (Eric Bogosian) held all the phone calls, to tell his listening audience what he really felt about them, as the camera circled around him: Believe it or not, you make perfect sense to me. I should hang. I'm a hypocrite. I ask for sincerity and I lie. I denounce the system as I embrace it.

The 30 Best Films of the Decade We’re all in that humanistic mode of evaluating our lives – coming up on the end of the year and the last time a zero will be the third digit on our calendars. We’re all (from Variety to Cat Fancy) also waxing expert on what films were the best of the best of the best of the past ten years. Which is why there is an unnavigable sea of opinion polluting the internet right now. Neil and I thought, ‘If everyone else is doing it, why can’t we? And why not do it better?” 82 mind-blowing movies facts you probably didn't know 1. Sean Connery wore a wig in every single one of his Bond performances. 2. Another 12 Mind-Blowing Documentaries To Watch On Netflix Assuming you've already powered through our previous collection of 12 mind-blowing documentaries to watch on Netflix, we've pulled together another set for your non-fiction viewing pleasure. Please binge-watch accordingly. "Shenandoah" In depicting the story of four high school boys who murdered a Mexican immigrant, "Shenandoah" dissects the mob mentality of the small town in which their atrocity took place. Whether or not you were familiar with this case when it ran through the news, the objective here is to take on a very specific form of racism, told through the disturbing reality of American life for those who don't fit into the mold of "tradition." "Girl Model" "Girl Model" renders a startling look at an industry that does not flinch at the exploitation of children, as told from the perspective of an ex-model working as a Russian scout. "Orgasm, Inc."

Marc Chagall biography Marc Chagall was a Belorussian-born French artist whose work generally was based on emotional association rather than traditional pictorial fundamentals. Synopsis Born in Belarus in 1887, Marc Chagall was a painter, printmaker and designer associated with several major artistic styles, synthesizing elements of Cubism, Symbolism and Fauvism.