33 Movies To Watch When You're Sad, Glum Or Bummed&160;Out! www.galadarling.com 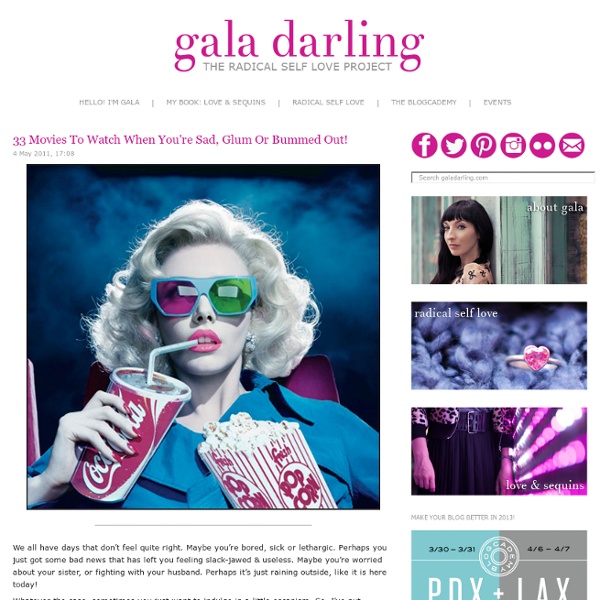 We all have days that don’t feel quite right. Maybe you’re bored, sick or lethargic. Perhaps you just got some bad news that has left you feeling slack-jawed & useless. Maybe you’re worried about your sister, or fighting with your husband. Perhaps it’s just raining outside, like it is here today! Whatever the case, sometimes you just want to indulge in a little escapism. (Oh, I should warn you… I have dreadful taste in movies!) Enjoy! 10 Things I Hate About You This was my favourite movie when I was an angsty teenager! “Iwis it is not halfway to her heart. here. (500) Days Of Summer Okay, this one stars Joseph Gordon Levitt too! I fell in love with (500) Days Of Summer immediately. It’s a total indie rock love story. It is so wonderful. The Addams Family Firstly, I think this movie is responsible for many, many aspects of my adolescence. If you’re not familiar, The Addams Family started as a cartoon in The New Yorker in the 1930s, & became a television show in the 1960s. P.S. Amélie Burlesque

Top 20 worst movies of 2011 What is Movie Buzz? MovieBuzz rates which movies are trending within the MovieFIX community. You can choose if you "Want to see" or are "Not Interested" in seeing the movie on the Homepage trailer player, or in the Movie Information page. After 20 votes, we tally these scores and create a percentage of how many people "Want to see" that movie. Myth, Legend, Folklore, Ghosts Apollo and the Greek Muses Updated July 2010 COMPREHENSIVE SITES ON MYTHOLOGY ***** The Encyclopedia Mythica - SEARCH - Areas - Image Gallery - Genealogy tables - Mythic Heroes Probert Encyclopaedia - Mythology Gods, Heroes, and MythDictionary of Mythology What is Myth?

The 30 Best Films of the Decade We’re all in that humanistic mode of evaluating our lives – coming up on the end of the year and the last time a zero will be the third digit on our calendars. We’re all (from Variety to Cat Fancy) also waxing expert on what films were the best of the best of the best of the past ten years. Which is why there is an unnavigable sea of opinion polluting the internet right now. Neil and I thought, ‘If everyone else is doing it, why can’t we? Imagine Pot Was Legal. How Would You Brand It? Woeful state budgets have relit the long-burning debate about pot legalization---couldn't California rescue itself by making weed legal, then taxing it? Meanwhile, more than 40% of Americans now favor legalization--which is the highest portion since the 1980s; Nate Silver, at FiveThirtyEight, has watched the trends and estimates that popular support will become overwhelming in 15 years time. So Print, the hoary graphic-design magazine, posed a challenge to four top designers: How should the package of legal weed actually look?

Interesting Movies - StumbleUpon I’ve seen a lot stupid movies in mi life, but some moments are just too stupid. I’m sure it happened to you too. Well, i I have right, take a look, and i am sure that you will recognize some really stupid moments in movies. Take a look, and enjoy The Bitterroot Footage My name is Chad. I'm a student at a university in New York. I just moved to a studio apartment and needed some furniture. I found a guy on Craigslist that wanted to desperately get rid of his things at super cheap prices so I went to check it out. He sold things in bulk to get rid of as much things as possible. Corpus Christi Claim: Jesus will be portrayed as a homosexual in an upcoming film. Examples:[Collected on the Internet, 2000] I can't believe it. There is a movie that is coming out in 2001 saying Jesus and his disciples were gay!

3 Office Fixes That Will Increase Employee Productivity If you're looking for an excuse for poor productivity, tell your boss it's the office's fault. A new study from the National Bureau of Economic Research claims that air pollution has a big effect on farm worker productivity. Most of us don't work on farms, but environmental factors are having an impact on your productivity anyway--and we're not just talking about the distracting, noisy people in the next row of cubicles. Ventilation It's not your imagination: Stale air really does make it hard to work.