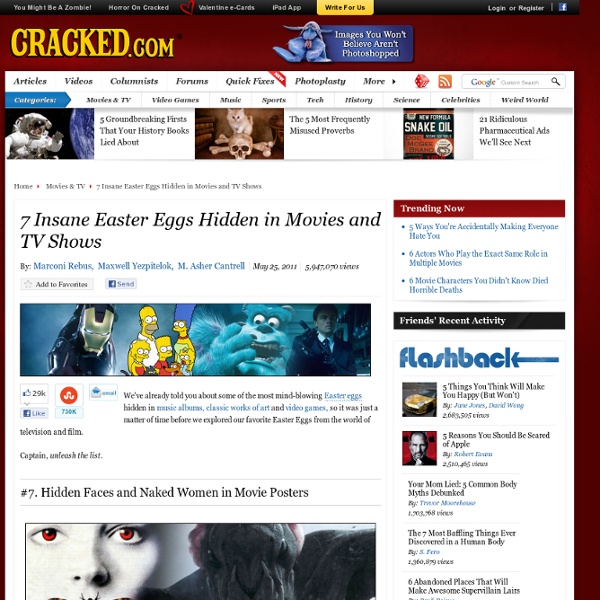 We've already told you about some of the most mind-blowing Easter eggs hidden in music albums, classic works of art and video games, so it was just a matter of time before we explored our favorite Easter Eggs from the world of television and film. Captain, unleash the list. Hidden Faces and Naked Women in Movie Posters Most of us don't look twice at movie posters, short of muttering under our breath and saying, "Oh fuck, they're doing a sequel/remaking/rebooting that shit?" So it's easy to miss some of the awesome things artists are hiding in the posters, presumably for the hell of it. For example, check out the poster for the fourth Indiana Jones movie: Now take a really close look between the eyes of the skull and you can see this distinctly alien-looking figure: It's either an alien, or a pumpkin. Well ain't that something? If you look at the smoke in the lower right, you can kind of see half of a face. Either it's the film's monster, or it's the devil or some shit. Guess what?

Another 20 games that make you think about life First we gave you five. Then we gave you ten. Now we are giving you 20 games that make you think about life. As with our previous lists, we have focused mainly on free games that you can play in your browser. 1 Elude Developed by Singapore-MIT Gambit Game Lab, Elude is a dark, atmospheric game that aims to shed light on the nature of depression. The forest that you start the game in represents a normal mood. This is a gloomy underground cavern, with a sticky muddy base that sucks you down. 2 Air Pressure You will have to play through Air Pressure - a Flash port of an interactive novel by Bentosmile - more than once to truly understand the characters and themes in this game. 3 Symon Another impressive production by Singapore-MIT Gambit Game Lab, Symon is a point-and-click adventure game with a difference. You also get to solve a lot of puzzles. 4 Ulitsa Dimitrova The Russians have never been the most cheery people. 5 Ute I am not quite sure what to make of this game. 6 Aether 8 Yet One Word

Bacon Wrapped Media - 11 Funny Facts I Learned From The Movies - StumbleUpon For More Fun Movie Facts, Click HERE About the author: Prasad View all posts by Prasad 6 Absurd Movie Plots You Won't Believe Are Based on Reality We spend so much time here debunking silly things we see in fiction that it's easy to forget how truly ridiculous real life is in comparison. Even the silliest, most implausible characters or plots from action movies have come true. Not often, mind you, but they do happen. #6. Indiana Jones movies, The Mummy movies, The Da Vinci Code movies, those Nicholas Cage movies that basically rip off The Da Vinci Code -- they all feature ridiculous but popular characters: university professors who throw away their mortarboards and "research" history by punching it right in the goddamn face. "Before you start killing everyone, would you mind fact-checking my thesis on Ancient Egyptian religion?" Nobody believes it's really like this, or at least we hope not. But It Has Happened ... Meet Roy Chapman Andrews, the rumored real-life inspiration for Indiana Jones, who divided his time between searching for fossils and gun-fighting with Mongolian bandits. thedispersalofdarwin"You're my next hat." #5. #4.

Movie Facts Click Here For More Fun Movie Facts About the author: Prasad View all posts by Prasad Heckling Hitler: 15-plus attempts to make the Führer funny | Film | Inventory 1. The Producers (1968)Adolf Hitler was a madman, a bigot, a dictator, and a cautionary example of how one man can induce a genocidal mass hysteria. So what, we can’t laugh at the guy? 2. 3. 4. 5. 6. 7. 8. [pagebreak] 9. 10. 11. “8 Simple Rules For Buying My Teenage Daughter,” Family Guy (2005)When Meg becomes fed up with babysitting, Lois hires a lovely young thing named Liddane to serve as Stewie’s occasional caretaker. 12. 13. 14. 15-plus. 25 Spectacular Movies You (Probably) Haven’t Seen Midnight in Paris Woody Allen’s latest places starving writer Owen Wilson in Paris with his fiancée, Rachel McAdams. Searching for inspiration for his incomplete novel, Owen begins taking strolls around the city at night where he discovers an unexpected group of people. I wish I could be more specific, but it would ruin the surprise. Know that it is brilliant, witty and full of mystique. 92% on Rotten Tomatoes (RT). Let the Right One In The best vampire movie ever made in my opinion. Watch Let the Right One In for FREE on Amazon Instant Video The Man From Earth Holy &#%@ this film’s plot is fascinating! Garden State This is my absolute favorite film. Waking Life It’s impossible for you to grasp Waking Life without actually watching it, but I’ll do my best to explain it. Watch Waking Life for FREE on Amazon Instant Video Closer This film is a rather dark, yet comedic story about the twisted relationships between Natalie Portman, Jude Law, Clive Owen and Julia Roberts. Sin Nombre Snatch The Descent

Famous Movie Couples: Do You Love Like They Do? Ever wonder what kind of love you’re in? These famous movie couples run the gamut from passionate lovers who'll never let go to flirtatious players who might as well be allergic to love. Check out their love styles to help you discover your own. QUIZ: What's Your Love Style? Jack and Rose (Titanic) - Passionate Thanks to “Titanic,” an entire generation believes that passionate love feels like flying on the bow of a cruise ship, serenaded by Celine Dion. MORE: Love Makes You Look Beautiful Jesse and Celine (Before Sunrise) – Passionate There’s nothing more passion-inducing than romance on a deadline. MORE: Food for the Sleepless Emma and Adam (No Strings Attached) – Flirtatious Emma isn’t the affectionate type and describes her feelings about dating as an “emotional peanut allergy.” QUIZ: Are You Sexually Satisfied? Jacob and many, many women (Crazy, Stupid, Love) – Flirtatious MORE: Emma Stone Talks Inner & Outer Beauty in "The Help" Robbie and Julia (The Wedding Singer) – Affectionate Mr.

5 Celebrities Who Got Famous by Being Obsessed Fan Boys Right now there are kids all over the world wearing their favorite band's T-shirt and strumming an oddly sized air guitar in front of their mirror, nursing implausible dreams of some day getting to take the stage. Real life never works out that way, of course -- liking something a lot in no way guarantees you'll grow up to be any good at it. The closest we'll ever get to our idols is when their bodyguards rough us up for trying to get an autograph. Most of the time, anyway. Sometimes you get stories like ... #5. Via levelselect.co.uk Started Out As: Seth Killian, an ordinary, nerdy kid who just happened to really, really freaking love Street Fighter. Official GDC But Became: A freaking character in Street Fighter IV, the main boss "Seth" ... It's a damn good thing his name wasn't Mortimer. ... and also a Capcom employee. Admit it: When you were 10 years old, a lot of you thought that if you got really good at Mario, some day they'd let you work at Nintendo. But then we have Seth Killian. #4.

Viral Video Chart As of 11 August 2015, data from the Unruly Viral Video Chart will only be available to subscribers of Unruly Analytics™ and via partnerships with our press partners, including Campaign, Werben & Verkaufen, Horizont, Contagious magazine, Campaign Asia and Mumbrella Australia. If it’s deeper insight into branded video trends you’re after, head across to our Insights page for video data and analysis that will blow your mind! The 7 Greatest (True) Johnny Depp Stories Ever Told Somehow Johnny Depp always seems to commits the weirdest crimes. Even when the guy is doing something "wrong", he does it with style. He's never been arrested for doing anything outside of the realm of what you'd expect from him, even with all his money. In 1994, Depp was staying at a fancy New York hotel and completely wrecked his room. When police arrived at the scene, there was a smashed glass coffee-table and other destroyed, mangled furniture in the $1200-a-night suite. The alleged creature was never found. Johnny Depp's cavalier attitude about his brushes with the law and incarceration make him even more awesome. The other crime Depp was caught committing is just as unexpected, and pretty damn awesome (not including that paparazzi brawl he had, because really, who could stand those people). The billboard featured Depp holding a gun with the slogan, "Other Kids Pack Lunch," underneath it. Source