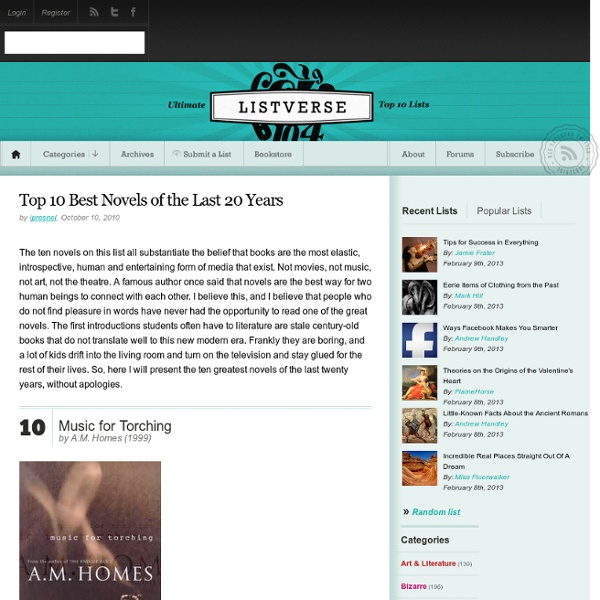 Books The ten novels on this list all substantiate the belief that books are the most elastic, introspective, human and entertaining form of media that exist. Not movies, not music, not art, not the theatre. A famous author once said that novels are the best way for two human beings to connect with each other. I believe this, and I believe that people who do not find pleasure in words have never had the opportunity to read one of the great novels. The first introductions students often have to literature are stale century-old books that do not translate well to this new modern era. Music for Torching by A.M. First Sentence: ”It is after midnight on one of those Friday nights when the guests have all gone home and the host and hostess are left in their drunkenness to try and put things right again.” As the only woman on the list, A. Fight Club by Chuck Palahniuk (1996) Of course, Palahniuk had to be on this list. House of Leaves by Mark Danielewski (2000) The house is alive. The Road

The Hardest Part Of Traveling No One Talks About You see the world, try new things, meet new people, fall in love, visit amazing places, learn about other cultures – then it’s all over. People always talk about leaving, but what about coming home? We talk about the hard parts while we’re away – finding jobs, making real friends, staying safe, learning social norms, misreading people you think you can trust – but these are all parts you get through. All of these lows are erased by the complete highs you experience.

List of fictional diseases Items in this list are followed by a brief description of symptoms and other details. In literature[edit] In film[edit] On television[edit] The 10 Most Disturbing Books Of All Time In my younger days if I heard a book or movie was disturbing or hard to handle I generally took that as a challenge. Most books generally turned out to not be too bad, but occasionally I’d come across something that would leave me with a sick feeling in my stomach for weeks. I’ve largely outgrown this “genre” of late, but here are my picks for the ten most disturbing books of all time. Any one of these books is capable of leaving you feeling a little depressed at the least, and permanently scarred at the worst. I’d say enjoy, but that doesn’t really seem appropriate …

50 Books That Changed the World For centuries, books have been written in an attempt to share knowledge, inspiration, and discoveries. Sometimes those books make such an impact that they change the way the world thinks about things. The following books have done just that by providing readers an education in politics and government, literature, society, academic subjects such as science and math, and religion. Politics and Government The Greatest Books of All Time, As Voted by 125 Famous Authors “Reading is the nourishment that lets you do interesting work,” Jennifer Egan once said. This intersection of reading and writing is both a necessary bi-directional life skill for us mere mortals and a secret of iconic writers’ success, as bespoken by their personal libraries. The Top Ten: Writers Pick Their Favorite Books asks 125 of modernity’s greatest British and American writers — including Norman Mailer, Ann Patchett, Jonathan Franzen, Claire Messud, and Joyce Carol Oates — “to provide a list, ranked, in order, of what [they] consider the ten greatest works of fiction of all time– novels, story collections, plays, or poems.” Of the 544 separate titles selected, each is assigned a reverse-order point value based on the number position at which it appears on any list — so, a book that tops a list at number one receives 10 points, and a book that graces the bottom, at number ten, receives 1 point. In introducing the lists, David Orr offers a litmus test for greatness:

16 People On The Most Important Thing They’ve Learned Up Until Now Instead of creating a list of my own life lessons, I thought I would compile a list of what the people around me had to say. So I asked the question, “What was the most important thing you’ve learned in life until this point?” 1. presents: Awesome Mysteries Youve Never Heard Of Green Children In the 12th century near Suffolk, England local farmers made a remarkable discovery: a boy and a girl weeping in a field... both with green skin. The children spoke no English and refused to eat food. They both wore oddly-colored clothing that appeared to be metallic.