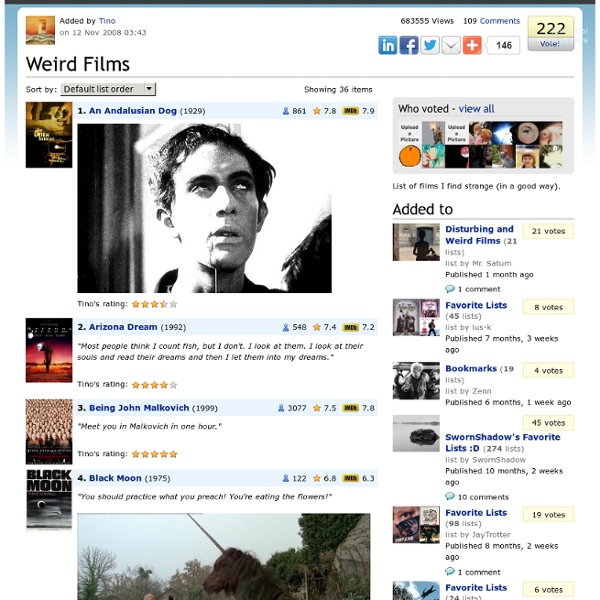 16 Strangest Movies Everyone Should See There are movies you see, and then there are movies you experience. This list compiles 16 of the strangest movies that must be seen to be believed. They break all the rules to surprise us, challenge us, and give us one-of-a-kind cinematic experience. Get wet and wild with some slow motion insanity - The Feed Blog (CBS News) Do you like your parties wet, wild and out of control? Are you in the mood for something eye-popping, humorous and bizarre? Do you happen to like slow motion...? Because we have all of these and more mixed into a fun blend that goes down smooth above. The surreal, hypnotizing and also rather hilarious Vimeo clip (with music by DJ MAHF) comes courtesy of Bruton Stroube Studios who write about the background behind its creation:

Donnie Darko A new theory to help the viewer unravel the cult classic. Erik A. Coburn Top 50 Dystopian Movies of All Time Massive dehumanization, totalitarian government, rampant disease, post-apocalyptic terrains, cyber-genetic technologies, societal chaos and widespread urban violence are some of the common themes in dystopian films which bravely examine the ominous shadow cast by future. A dystopia is a fictional society that is the antithesis or complete opposite of a utopia, an ideal world with a perfect social, political and technological infrastructure. A world without chaos, strife or hunger. A world where the individual potential and freedom is celebrated and brought to the forefront. In contrast, the dystopian world is undesirable with poverty and unequal domination by specific individuals over others.

10 Disney Movies With Horrific Origins Weird Stuff As many people know by now, some of Disney’s much loved animated musicals, beloved and enjoyed by so many happy little children for the past eighty years, have truly horrific origins involving rape, cannibalism, torture and other very nasty happenings. Some people believe Disney improved the original stories, making them more accessible and enjoyable to the general public, others are of the opinion that Disney mauled them, or at least failed completely to do them justice. Here are ten examples of some of the lesser-known origins of Disney’s movies, some going back in history to sources that many people are unaware of, others revealing origins that haven’t previously been discussed in such detail on the internet.

The Ten Best Horror Movies of 2008 Editor’s Note: As part of our Year in Review feature, we’ve tapped our resident horror expert Robert Fure for a list of the Ten Best Horror Movies of 2008. To read more of Robert’s horror reviews, check out The Coroner’s Report every Thursday. Being a horror fan is tough business and some years are worse than ever. 2008 saw its share of lame PG-13 movies (Prom Night) and an influx of crappy remade Japanese films (Shutter), in addition to having some of the more anticipated films (Trick ‘r Treat) delayed from wide release once again. That said, we worked long and hard to scrounge up 10 Horror films worthy of recognition in 2008 and believe me, it wasn’t easy.

Most Controversial Films of All Time The Moon is Blue (1953) D. Otto Preminger Well-bred people in the 1950s didn't use words like "virgin," "seduce" and "mistress" in public, but this mild sex farce did and became a cause celebre. This daring sex farce and romantic comedy was the first major studio-produced film from Hollywood that was released without an approved code seal from the Production Code Administration (PCA). Empire Features - StumbleUpon 10,000 Empire readers, 150 of Hollywood's finest and 50 key film critics voted in the most ambitious movie poll evert attempted. 500. Ocean's Eleven (2001) Director: Steven Soderbergh Slick, suave and cooler than a penguin's knackers, Soderbergh's starry update of the Rat Pack crime caper not only outshines its predecessor, but all the lights of The Strip combined.Read our Ocean's Eleven review 499.

8 Iconic Movie Rules To Live By Few scenes in movies are as satisfying as a character confronting a rule. Whether they’re recalling what not to do (woo, callback!), facing the consequences of breaking the rule (woo, other callback!) or learning something deeper by embracing it (not really a callback, but still cool!)