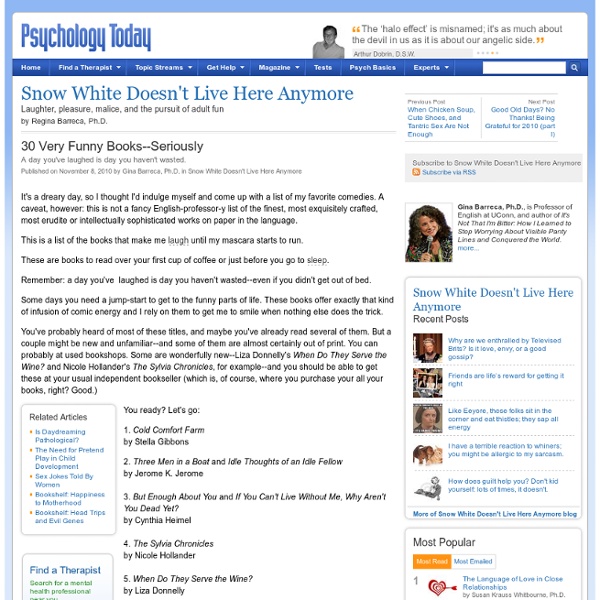 books of the decade Anybody remember how anxious and thrilled we were in those last months of the 20th century? When we weren't at war and we had a budget surplus and it looked like Al Gore would be president? The prospect of a 21st century filled with new technologies, new art and literature loomed large and bright. The Truth about High Cholesterol By Dr. Mercola Cholesterol could easily be described as the smoking gun of the last two decades. 74 Books to Read if You Love the Hunger Games If you haven't read the Hunger Games you really should! They're pretty awesome. Check them out: If you're already a fan of the Hunger Games by Suzanne Collins... You should add these books to your to be read pile!

100 best first lines from novels Following is a list of the 100 best first lines from novels, as decided by the American Book Review, a nonprofit journal published at the Unit for Contemporary Literature at Illinois State University: 1. Call me Ishmael. - Herman Melville, Moby-Dick (1851) 2. It is a truth universally acknowledged, that a single man in possession of a good fortune, must be in want of a wife. - Jane Austen, Pride and Prejudice (1813) 3.

10 Simple Postures That Boost Performance Psychological research suggests simple actions can project power, persuade others, increase empathy, boost cognitive performance and more… We tend to think of body language as something that expresses our internal states to the outside world. But it also works the other way around: the position of our body also influences our mind. As the following psychological research shows, how we move can drive both thoughts and feelings and this can boost performance. 1.

edgar allan poe Personal tragedy was, unfortunately, a recurring theme throughout Edgar Allan Poe's life. Born in Boston in 1809 to actor parents, he never knew his father David Poe, who left his mother and disappeared soon after Edgar was born, then died in Virginia in 1810. His mother, who suffered from tuberculosis (then called consumption), died in Richmond, Virginia in late 1811, orphaning Edgar, his older brother William Henry, and half-sister Rosalie. Frances Allan of Richmond convinced her wealthy merchant husband John to take the child Edgar into their home. It was here that Edgar was to be raised, with his early influences being the stories of house slaves and the tales told by skippers and sea merchants. The dead and dying would always have a strong hold over Edgar, as demonstrated by the anecdote that a six-year old Edgar was once "seized with terror" as he passed by a local graveyard, convinced that the spirits of the undead would run after him.

The 100 Best Books of All Time Many publishers have lists of 100 best books, defined by their own criteria. This article enumerates some lists of "100 best" books for which there are fuller articles. Among them, Science Fiction: The 100 Best Novels (Xanadu, 1985) and Modern Fantasy: The 100 Best Novels (Grafton, 1988) are collections of 100 short essays by a single author, David Pringle, with moderately long critical introductory chapters also by Pringle. For publisher Xanadu, Science Fiction was the first of four "100 Best" books published from 1985 to 1988.

how to write fiction - hemingway Image by Lloyd Arnold via Wikimedia Commons Before he was a big game hunter, before he was a deep-sea fisherman, Ernest Hemingway was a craftsman who would rise very early in the morning and write. His best stories are masterpieces of the modern era, and his prose style is one of the most influential of the 20th century. Hemingway never wrote a treatise on the art of writing fiction. He did, however, leave behind a great many passages in letters, articles and books with opinions and advice on writing. Some of the best of those were assembled in 1984 by Larry W.

these are hilarious picks. I loved reading them! by smsoa Feb 21