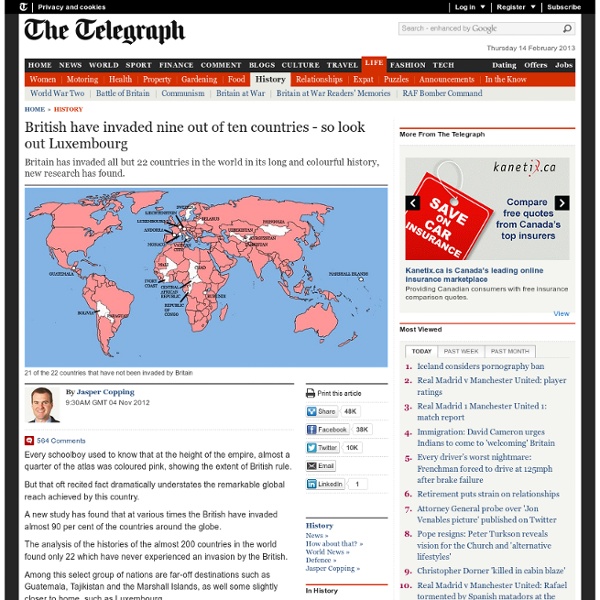 The analysis is contained in a new book, All the Countries We've Ever Invaded: And the Few We Never Got Round To. Stuart Laycock, the author, has worked his way around the globe, through each country alphabetically, researching its history to establish whether, at any point, they have experienced an incursion by Britain. Only a comparatively small proportion of the total in Mr Laycock's list of invaded states actually formed an official part of the empire. The remainder have been included because the British were found to have achieved some sort of military presence in the territory – however transitory – either through force, the threat of force, negotiation or payment. Incursions by British pirates, privateers or armed explorers have also been included, provided they were operating with the approval of their government. Among some of the perhaps surprising entries on the list are: * Cuba, where in 1741, a force under Admiral Edward Vernon stormed ashore at Guantánamo Bay. Andorra Belarus

Gay Rights and American Foreign Policy by Justin Raimondo The announcement that the US government will henceforth push the achievement of “gay rights” internationally, as a key element of its foreign policy, gives new meaning to the phrase “blowback” – and cut out the snickering! Because the self-righteousness and narcissism of American policymakers, in this instance, will have very real consequences for gay people throughout the world, and it isn’t going to be pretty. If anything underscores the bedrock principle of what I call “libertarian realism” – the concept that the real roots of American foreign policy are determined by the vagaries of domestic politics – it is this proclamation, enunciated in one of Hillary Clinton’s more bombastic and self-regarding tirades, delivered in front of the UN “Human Rights Council.” With the President’s political base dispirited, and his reelection chances increasingly doubtful, what Democratic strategists perceive as a gay voting bloc is being energized for the battle to come.

The World of a Professional Naked Girl About a month ago, I was daydreaming at work and a bunch of random memories flooded into my mind. One in particular was this flash of me and an ex-gf from long ago, hanging out in the living room of the apartment we shared. I remembered how this girl, who was a dancer of sorts, could just do these faces and body movements out of nowhere, just in passing, as something intended to be a joke, that would floor me. I've always wondered how some ladies can turn this fountain of sheer, gun blast sexy power on and off, aiming it at exactly who they want, when they want. I asked my new friend, well-known artist and professional sexy lady, Molly Crabapple, to try and make sense of the ramblings I wrote her one day, and this is what she came up with. - Kelly McClure Illustration by Molly Crabapple. "If you keep traveling, you're going to get yourself raped." Z. and I were sitting in a cafe on the edge of the Sahara. "That man just left a mosque," Z said, after an elderly man eye-fucked me.

Empire Week II: The E Word I started the Empire Week thinking it would be a cool showcase for talking about Porter’s book but I have gotten seriously sidetracked. Some stuff at work and other things have intruded rather rudely. So, today’s entry is a tad late and also quite scatter-brained [who said I knew anything about empires?]. Before the week is over, I would have liked to talk a bit about conceptions of Empire in Middle East and South Asia. I think there are rather interesting variations that can inform the way we look at empires in general. Let’s hope I get that far. From the Latin imperium came Empire and Imperialism, often used interchangeably and, as Bernard Porter contends, with a bit of stigma attached to them. The question before us is: What did it mean? The rat-race of conquest and colonialization between France and England had a lot to do with the ways Britian saw itself. The twentieth century dawned to find Britain internally and externally contested over its Empire and its Imperialism.