15 Things Worth Knowing About Coffee 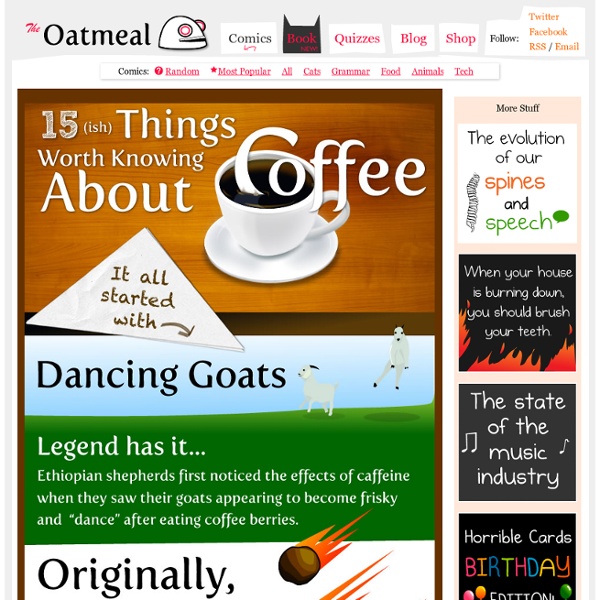 Human World - StumbleUpon Human World The women of the Tiwi tribe in the South Pacific are married at birth. When Albert Einstein died, his final words died with him. The nurse at his side didn't understand German. St Patrick, the patron saint of Ireland, was not Irish. The lance ceased to be an official battle weapon in the British Army in 1927. St. Many sailors used to wear gold earrings so that they could afford a proper burial when they died. Some very Orthodox Jew refuse to speak Hebrew, believing it to be a language reserved only for the Prophets. A South African monkey was once awarded a medal and promoted to the rank of corporal during World War I. Born 4 January 1838, General Tom Thumb's growth slowed at the age of 6 months, at 5 years he was signed to the circus by P.T. Because they had no proper rubbish disposal system, the streets of ancient Mesopotamia became literally knee-deep in rubbish. The Toltecs, Seventh-century native Mexicans, went into battle with wooden swords so as not to kill their enemies.

The Secret Ingredient In Your Orange Juice Do you buy orange juice at the store? If you do, I’m sure you’re careful to buy the kind that’s 100% juice and not made from concentrate. After all, that’s the healthier kind, right? If I’m describing you, then you’re either going to hate me or love me by the time you’re done reading this post. Haven’t you ever wondered why every glass of Tropicana Pure Premium orange juice tastes the same, no matter where in the world you buy it or what time of year you’re drinking it in? Generally speaking, beverages that taste consistently the same follow recipes. The reason your store bought orange juice is so consistently flavorful has more to do with chemistry than nature. Making OJ should be pretty simple. In fact, it’s quite flavorless. When the juice is stripped of oxygen it is also stripped of flavor providing chemicals. Why aren’t these flavor packs listed as ingredients? Good question! So, what should you do about it? First off, I must ask: Why are you drinking juice??

The Most Amazing Facts on the Internet Facetious and abstemious are the only words that contain all the vowels in the correct order. "Adcomsubordcomphibspac" is the longest acronym. It is a Navy term standing for Administrative Command, Amphibious Forces, Pacific Fleet Subordinate Command. "Almost" is the longest commonly used word in the English language with all the letters in alphabetical order. "Flushable" toilets were in use in ancient Rome. "Billie Jean" by Michael Jackson was the first video to air on MTV by a black artist. "Dreamt" is the only English word that ends in the letters "mt". "Duff" is the decaying organic matter found on a forest floor. "Fickleheaded" and "fiddledeedee" are the longest words consisting only of letters in the first half of the alphabet. "Asthma" and "isthmi" are the only six-letter words that begin and end with a vowel and have no other vowels between. "Fortnight" is a contraction of "fourteen nights." "Forty" is the only number which has its letters in alphabetical order. A cucumber is 96% water.

Wondering About a Vegan Diet? (Infographic) Want to know how to be healthy and cruelty-free? No worries—eating vegan is easy! Get all your answers and more with PETA’s “Wondering About a Vegan Diet?” infographic, and don’t forget to share this infographic on Facebook. Are you ready to eat healthy? Pledge to go vegan for 30 days! Embed “Wondering About a Vegan Diet?” <a href=” src=” width=”720″ border=”0″><p>Wondering About a Vegan Diet? True Facts Facts - interesting, provocative, well-seasoned One out of ten children in Europe are conceived on an IKEA bed. Antarctica is the only continent without reptiles or snakes. An eagle can kill a young deer and fly away with it. In the Caribbean there are oysters that can climb trees. Intelligent people have more zinc and copper in their hair. The world's youngest parents were 8 and 9 and lived in China in 1910. When George Lucas was mixing the American Graffiti soundtrack, he numbered the reels of film starting with an R and numbered the dialog starting with a D. The youngest pope was 11 years old. Mark Twain didn't graduate from elementary school. Proportional to their weight, men are stronger than horses. Pilgrims ate popcorn at the first Thanksgiving dinner. They have square watermelons in Japan - they stack better. Iceland consumes more Coca-Cola per capita than any other nation. Heinz Catsup leaving the bottle travels at 25 miles per year. It is possible to lead a cow upstairs but not downstairs.

Top 8 Supplements to Boost Your Pineal Gland Function Anna Hunt, Staff WriterWaking Times The pineal gland, an endocrine gland located in the brain, is said to be the seat of the soul. Also referred to as the Third Eye, this small gland is believed to be involved in reaching higher levels of consciousness, acting as a gateway to dimensions beyond our brain-created reality. To learn more about the pineal gland, see: What is the Pineal Gland? For the people that seek to fully activate their spiritual potential and tap into the power of the pineal gland, one must begin by strengthening its function though detoxification and proper nutrition. Researchers are finding that in many people, due to our poor diet with pesticide and chemical-laden foods and environmental toxins such as fluoride in our water, the pineal gland and our entire bodies are becoming exposed to many more toxins and nano-organisms than ever before. 1. The pineal gland already produces the hormone melatonin, which affects the body’s circadian rhythms of waking and sleeping. 2.