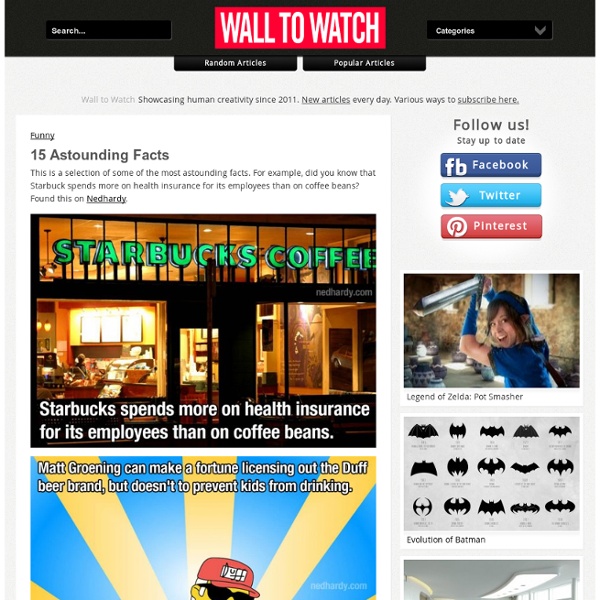 Funny This is a selection of some of the most astounding facts. For example, did you know that Starbuck spends more on health insurance for its employees than on coffee beans? Found this on Nedhardy. Share Related:  amazing facts • interesting facts

Smart tips to make life easier Posted on February 24, 2012 in Humor If you’re new here, you may want to subscribe to our RSS feed or follow us on Facebook or Twitter . Thanks for visiting! Rate this Post (16 votes, average: 5.00 out of 5) Loading... So... 16 Amazing Facts About Sleep That Will Surely Impress You You need to sleep every day and sleeping is so important to you that lacking it could shorten your life. But I guess you didn’t really know much about sleep until you read this, right? Some of the facts about sleep really surprised me! 16 Things You Didn’t Know About Sleep | visual.ly Want to sleep better?

You know it’s hot when … | Bear Tales Hope you enjoyed. Source: Email chain. Let your friends enjoy share this post ... Like this: Like Loading... Related Road rage African style !!!!!!!!!!!!!!!!! When you are feeling rushed and in a hurry, maybe it is time to stop and appreciate the wonder all around you. In "General" Beach jokes ... I have collected a few beach jokes and thought I would share them with you. Weird & Unbelievable Facts New research published in Live Science [1] claimed that the humans have been predominantly right-handed for over 500,000 years, however, left-handed people make up 10 percent of the population, undoubtedly making them the odd ones out. There has been lots of research into why some people prefer … READ MORE Whether it’s leading countries, being part of a creative community or just wanting to experiment – at some point, some of the most famous names in history have tried or been addicted to drugs of some kind. Here’s the round-up of the most brilliant minds in history … READ MORE We all had that one weird kid in our class or that one friend who is so different that he stands out like a sore thumb. Leaving China for the first time, a 1,000 year old statue shares an interesting secret. We all are familiar with optical illusions – visual images that trick our eyes into seeing things differently than they are in reality. Here are 40 weird historical facts you probably didn’t learn in school.

Muslim Lolita Fashion Is A New Trend Inspired By Japan In an awesome fashion mash-up that nobody could’ve foreseen, Muslim fans of the Japanese lolita fashion trend have begun pairing these sweet-as-candy outfits with their hijabs, creating a unique new style that Japanese lolita fans are falling in love with. The lolita trend, at its most basic, involves wearing modernized Victorian- or Rococo-style dresses and outfits that are heavily accessorized and painstakingly coordinated into elaborate costumes. The trend’s fans (called ‘lolitas’) then meet up at various events to spend time together and appreciate each others’ outfits (or, as they call them, ‘coords’). Two Muslim lolitas, Noor and Alyssa, have pioneered the combination of lolita costumes with their Muslim hijabs. While fittingly stylish and flamboyant, their costumes still fully adhere to their religious principles. More info: Tumblr (Alyssa) | Tumblr (Noor) | Blogspot (Noor) (h/t: rocketnews, vice)

Nils Olav Coordinates: Colonel-in-Chief Sir Nils Olav is a King Penguin living in Edinburgh Zoo, Scotland. He is the mascot[1][2][3] and Colonel-in-Chief of the Norwegian Royal Guard. Nils was visited by soldiers from the Norwegian Royal Guard on 15 August 2008 and awarded a knighthood.[4] The honour was approved by King Harald V. During the ceremony a crowd of several hundred people joined the 130 guardsmen at the zoo to hear a citation from the King read out, which described Nils as a penguin "in every way qualified to receive the honour and dignity of knighthood".[5] The name 'Nils Olav' has also been given to two other King Penguins who preceded the current Nils Olav as the King's Guard's mascot.[6] Role in the military[edit] The bronze statue of Nils Olav Norway – whose explorer Roald Amundsen was the first person to reach the South Pole in 1911 – presented the zoo with its first King Penguin at its opening in 1913.[5] See also[edit] References[edit] External links[edit]

Why Do We Want To Squeeze Cute Things? Seeing something cute actually does bring out aggression in us, according to a paper presented at Society for Personality and Social Psychology's annual meeting in New Orleans last Friday. Researchers found 109 people to look at pictures of animals -- cute, funny and "neutral" photos of fluffy, fluffy puppies. The lucky participants then rated how they felt about the pictures: whether they agreed with the statement like "I just can't handle it!" The study's researchers, led by Rebecca Dyer, a graduate student in psychology at Yale University, dubs the phenomenon "cute aggression." "We think it's about high positive-affect, an approach orientation and almost a sense of lost control," she said. But for the sake of thoroughness, researchers did a second experiment to test whether the aggression was simply verbal, or whether people really did want to act out in response to wide-eyed kittens and cherubic babies. [LiveScience]

Dr. Joshua Levitt Special Report: 1 Sugar that Fights Disease, Chronic Conditions & Weight Gain Consumed in moderation, sugar is a helpful source of energy. That is... provided you get it from the right sources. We humans evolved to get our sugar by eating whole foods like fruits, vegetables, and yes, even honey. Your body knows how to extract the maximum benefit from these whole foods. First, honey supports your immune system and fights off harmful bacteria. As you know, your body is under constant assault by numerous viruses and bacteria that threaten to tire you out, make you sick, and even kill you. Fighting off this threat is key to staying healthy. One of the vital components in honey is an enzyme called glucose oxidase. This makes honey a powerful tool for fighting skin infections, healing wounds, and otherwise supporting your immune system. Second, it supplies the "building blocks" for healthy cells. In addition to giving you sugars, honey equips your body with a complex array of proteins, enzymes, minerals, vitamins, antioxidants, and other nutrients.