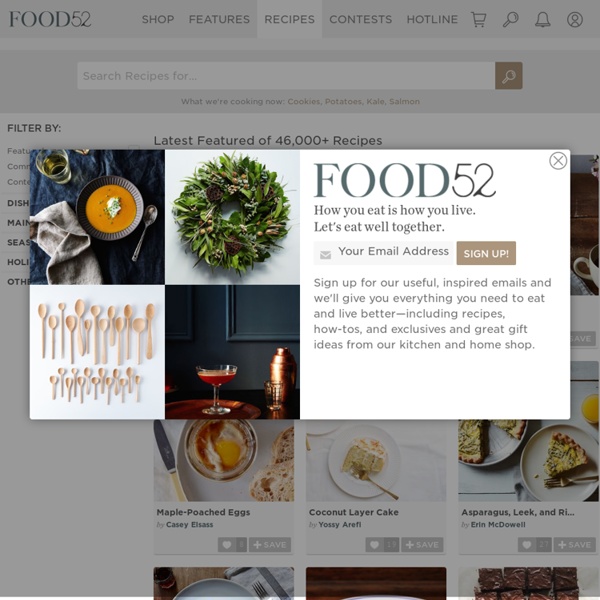 How you eat is how you live. Let's eat well together. Thanks for signing up! Connect with us to get more Food52! Sign up for our useful, inspired emails and we'll give you everything you need to eat and live better—including recipes, how-tos, and exclusives and great gift ideas from our kitchen and home shop.

A Cast Iron Skillet & A Camera I’m an herb collector. My pantry shelves are lined with jars of everything from butcher’s broom and witch hazel to marshmallow root and violet leaf. I buy them in bulk, arguably compulsively. I burn them, drink them, cook with them, bathe in them. I write quick poems & prayers with them. Delicious Recipes to Spice Up Your Dinner Rotation This post is in partnership with French’s Sweet Yellow Mustard and Spicy Yellow Mustard. I received compensation to write this post through the Sweet and Spicy Influencer Program. All content, photos, and opinions are my own. Thank you for supporting sponsors that allow me to create new content for Kevin & Amanda! Today I’m partnering with French’s Mustard to bring you this fabulous Honey Garlic Shrimp.

Food Recipe Blog - Free Recipes & Pictures of Food People Want. From comfort food to authentic ethnic cuisine, easy recipes for home cooked meals. - Part 20 I love vinegar. In fact, it is the one pantry staple I would have the hardest time living without. Much to my girlfriend’s chagrin, I do my best to sneak it into every dish I can get away with, even those that might not call for the addition. Amazing Rainbow Tie-Dye Number Surprise Cake Posted: 11 June, 2014 by Web Guy Josh Tags: Scoopla, Recipe, Rainbow If you've been looking for ways to get that WOW factor at your next party… look no further! This rainbow tie-dye number surprise cake is bound to be a hit with all guests young and old.

Moscow Russia: Best Food in Russia The largest metropolis in Europe, Moscow is experiencing a food and restaurant revolution. In just over 20 years since the fall of the Soviet Union, the Russian capital has shrugged off memories of scarcity and shortages, and is busy building an exuberant restaurant scene to cater for the myriad tastes of its huge and diverse population. It may be playing catch-up compared to other major cities, but with its creative restaurant conversions, nostalgic Soviet-style canteens, vivid marketplaces and farm-to-fork pioneers, there’s never been a better time to dine in Moscow. COOL CONVERSIONS The rise of Moscow’s restaurant scene is helping many of the city’s neglected old buildings find a new purpose. The ‘restauration’ craze has turned crumbling edifices in danger of demolition into vibrant dining spaces catering to all tastes and budgets.

- 24 Portuguese Food Blogs You Should Be Reading Photo by Ana of Tapas na Língua blog. Portuguese cuisine is largely unknown outside Portuguese-speaking communities, which is a pity because it is a country with such an incredible culinary culture. Many people probably don’t know this, but Portugal is also a small country brimming with food bloggers.

Joy the Baker — I feel like I’m grasping tight to the things around me these days. I’m probably the first to shrug off the change of season, the change of moving cities, and the change of traveling a ton as no big deal…. but it all adds up to matter and I have to admit I feel a little crazy in the brain. This season I’ve started a new workout routine. Since I’ve moved away from my beloved SoulCycle in California, I’ve started practicing Bikram Yoga in New Orleans. I’m terrible. Creative Food Art By The Plate Malaysian arsit Hong Ki, also known as RED, has taken on an interesting endeavor. Every day this month she will be creating a food art masterpiece one plate at a time. That means by the end of March we'll have 31 plates of yummy food art to marvel over. So far, she's created a replica of Edvard Munch's The Scream, lovely landscapes with watermelon, oats and edible flowers and a great wave of sushi. Ki is posting her daily creations on Instagram so be sure to check out her latest works of food art. Via Design Boom

Blog Index A confession: I've been going through a lot of changes as a person these last few months. Part of it stems from finishing my 5th and 6th books The Happy Herbivore Guide to Plant-Based Living and Happy Herbivore Holidays & Gatherings (out next month and this November). When I signed my first book contract, I had no idea what would happen... would that be it? One book turned into a contract for two more, and then three more for a total of 6. For years my fate was decided. I was going to be working on and writing books, and working on and writing books I did. stonesoup — 5 ingredient recipes The first time I tried going paleo there was one meal I really struggled with. If you’ve ever had an attempt at eating low carb or going ‘full paleo’, I bet you’ve struggled with this too. Yep.

Three Desserts You Can Make with a Whipping Siphon Whipping siphons are easy and fun to use. This Valentine’s Day, try wowing your special someone with a Modernist dessert created with nitrous oxide or carbon dioxide. Use our suggestions below for tasty ideas beyond the realm of whipped cream.