Revelation: The Bride, The Beast & Babylon 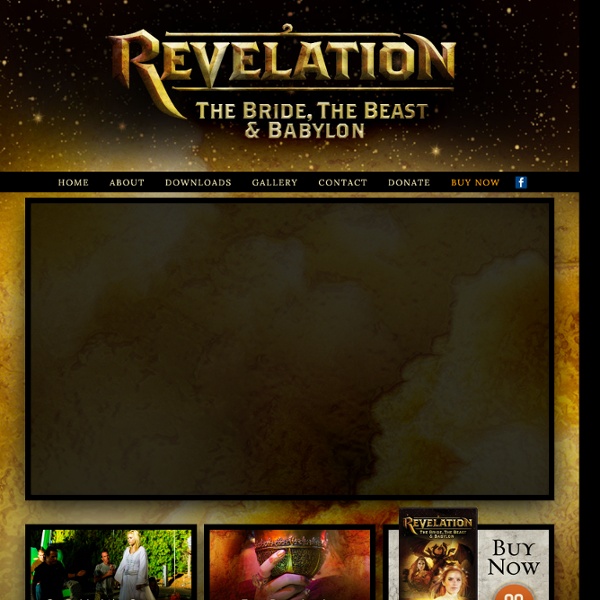 Related:  A Witness To Protestants

Revelation: The Bride, The Beast & Babylon JESUS In Book Of Daniel Yea, the whole Book of Daniel is not about Prophecy [though it does marvelously contain it], not about Babylon [though it does contain it in several modes], not about Nebuchadnezzar or Kingdoms [though it does contain them], not even about Daniel or his three friends [though they are part of it], but rather the whole Book is about CHRIST JESUS, the very "GOD/LORD/MOST HIGH GOD" [throughout the Book of Daniel, ie see Daniel 9:4, compare to Exodus 20:6 and John 14:15, etc] of Daniel, Hananiah, Mishael and Azariah, and even later in life, Nebuchadnezzar...and it reveals the Love of HIM who is ever loving, ever watchful, ever interested, ever faithful, ever among HIS people and ever working on our behalf... JESUS is seen as the "...Stone..." in [Daniel 2:35,45] JESUS is seen as "...the form of the fourth is like the Son of God." in [Daniel 3:25] JESUS is seen as "...[one] like the Son of man came with the clouds of heaven,..." in [Daniel 7:13] JESUS is seen as "...the prince of the covenant."

Understanding Tongues An Amazing Fact Legend has it that when the Greeks were unable to capture the city of Troy even after imposing a 10-year siege, they finally resorted to a clever stratagem. The Greek army pretended to sail away and left on the shore a huge, hollow wooden horse as an apparent victory gift. However, the gift was actually filled with several armed warriors! Sinon, a Greek spy inside Troy, persuaded the Trojans to bring the horse within the city walls, saying that to do so would mysteriously make Troy invincible. Differences of Interpretation A gift from an enemy can be very deadly. Shortly after becoming a Christian, I was hitchhiking from Palm Springs to Los Angeles to visit my mother. I was a little surprised by her question, because no one had ever asked me that before. "No, that's not what I mean," she said, looking a little frustrated. Even still, this kind lady was convinced that I was missing out on a primary element of the Christian experience. The Genuine Gift of Tongues No.

The Christian and Alcohol An Amazing Fact Tests show that after drinking three bottles of beer, there is an average of 13 percent net memory loss. After taking only small quantities of alcohol, trained typists were tested and their errors increased 40 percent. Is it biblically permissible for a Christian to drink alcohol? This controversial subject has evoked many passionate opinions among Christians. I submit that the Bible is in no way ambiguous when it speaks on alcohol and how it relates to God’s followers. Two Opposing Camps Among Christians, there are two primary camps of thought on this sensitive topic. Then there is the other position: Alcohol is an addictive and destructive drug that no sincere Christian should use to any degree. Of course, between these two diametrically opposed poles, there are countless variations of opinions. In fairness, I will state from the beginning that I am firmly in the unfermented camp! What Is Alcohol? Let’s begin with a definition. Two Types of Wine—Biblically Speaking

The USA in Bible Prophecy. Can it really be true? America in Bible prophecy - absolutely! When you think about it, it makes sense that the most powerful and influential nation on earth will play a vital role in the final stunning events of the world's closing history. But even more surprises await you as the Bible reveals how the leading nation of the world came to exist and why! Please read Revelation 13:11-18 before beginning this guide, because these eight verses give a prophetic picture of America in the days ahead. 1. Answer: The beast with seven heads (Revelation 13:1-10) is none other than the Roman papacy. In 1798, General Berthier inflicted a deadly wound upon the papacy when he took the pope captive. 2. "Power was given unto him to continue forty and two months." Answer: The Bible predicted that the papacy would lose its world influence and power at the end of the 42 months. 3. "And I beheld another beast coming up out of the earth; and he had two horns like a lamb, and he spake as a dragon." 4. 5. 6.

The Search for the True Church The Search Is there a true church in the world today? And if so, how can it be identified? Of all the religious questions facing the modern truth-seeker, this is certainly the most demanding and also the most frustrating. The average Christian today has been so totally turned off by these exaggerated boasts that many have even discounted the possibility that any “true church” could really exist. It is very important to recognize that no church can be proven superior because its members are without sin. But the question remains: Is there some valid way to identify the church which is closest to the biblical standards of truth? It must be apparent to all that if God has a special church in the world today, He will reveal it clearly and explicitly in His holy Word. I am reluctant to make any claims for what you are about to read, although I know very well that it could revolutionize your life. Our quest for truth will focus upon the twelfth chapter of Revelation. Persecution of the Church

The Beast, The Dragon and The Woman I. THE BEAST AND HIS BACKGROUND - A Fearful Warning The most fearful warning of punishment found anywhere in the Bible is contained in Revelation 14:9, 10: “And the third angel followed them, saying with a loud voice, If any man worship the beast and his image, and receive his mark in his forehead, or in his hand, The same shall drink of the wine of the wrath of God, which is poured out without mixture into the cup of his indignation; and he shall be tormented with fire and brimstone in the presence of the holy angels, and in the presence of the Lamb.” This description is so alarming and so very unlike all other verses which deal with God’s character that we almost recoil in horror. Right here we are curious to know more about the sin that provokes God’s strange act of fiery punishment. Please note that the issue revolves around the keeping of God’s commandments. The highest allegiance is accorded through the act of obedience. Two Powerful Contenders A Life or Death Issue A Symbolic Animal

3 Angels And Anti-Christ 3 Angels Messages And The Anti-Christ Cry aloud, spare not, lift up thy voice like a trumpet, and shew my people their transgression, and the house of Jacob their sins. Isaiah 58:1 The Three Angels Messages of Revelation give us the important message for these last days, containing the "Everlasting Gospel" of the Love of GOD and the Greatest Warnings to ever go to the whole world... ...of which one message is and contains the Seal of God as found in that Holy 4th Commandment [the 7th Day Sabbath of the Lord thy God], calls all out of Babylon, refuse the Mark of the Beast, refuse to worship it, and shows forth the Judgments of those who refuse to obey GOD in HIS Commandments, and who it is that are the saints and people of the True and Ever-living GOD: [1. And I saw another angel fly in the midst of heaven, having the everlasting gospel to preach unto them that dwell on the earth, and to every nation, and kindred, and tongue, and people, Revelation 14:6 [2. [3. What does this term even mean?

Speech & Tongues Of Fire What does the Bible have to say upon the subject of our speech, upon our witness, upon or language, for "Who hath made man's mouth" [Exodus 4:11;p]? What does the Bible have to say about a specific gift of the HOLY SPIRIT, the gift of "tongues"? Does the gift still exist today? How can one determine if it is of the right "spirit"? GOD does give "gifts unto men" [Ephesians 4:8;p], but the devil, a "murderer...abode not in the truth...liar" [John 8:44;p] loves "confusion" [1 Corinthians 14:33;p] and loves to "deceive" [Matthew 24:5;p; Revelation 20:3,8;p] and he counterfeits the true gifts and miracles of GOD to draw followers after himself, "by the iniquity of thy traffick" [Ezekiel 28:18;p], just as he did with 1/3rd of the angels in heaven [Revelation 12:4]. How then can we tell the difference? To the law and to the testimony: if they speak not according to this word, [it is] because [there is] no light in them. [1.] [2.] "...they are the spirits of devils, working miracles,..." [1.]

TRUTH Of The Sons Of GOD "Sons of GOD" Let us begin by quoting the two passages in Genesis 6 concerning the "Sons of GOD": "That the sons of God saw the daughters of men that they [were] fair; and they took them wives of all which they chose." [Genesis 6:2] "There were giants in the earth in those days; and also after that, when the sons of God came in unto the daughters of men, and they bare [children] to them, the same [became] mighty men which [were] of old, men of renown." So, the question that is commonly asked by many [Christians and non-Christians alike]: "Who are the "Sons of GOD" of Genesis 6:2,4?" This is a rather rash conclusion, without a much further and deeper consideration of the texts themselves, and for those who already hold that view, please allow for some time to cover the texts most thoroughly. Those who continue to promote that view despite what will be shown here, then do not fully consider the ramifications of their conclusion and what it would mean to the Gospel itself and end-time events.

Related:
Related:  A Witness To Protestants