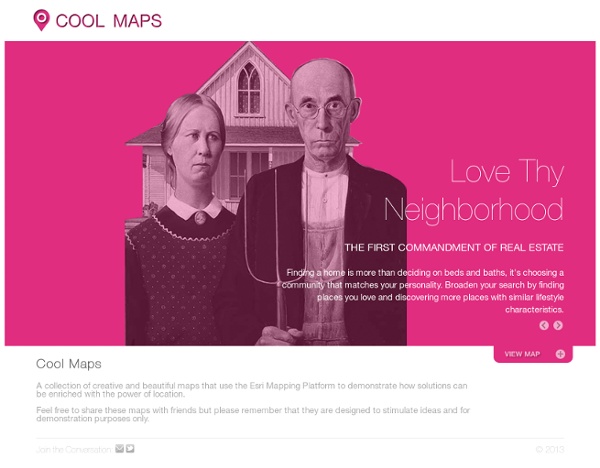 12 Maps That Changed the World - Uri Friedman "All cultures have always believed that the map they valorize is real and true and objective and transparent," Brotton, a professor of Renaissance studies at Queen Mary University of London, told me. "All maps are always subjective.... Even today’s online geospatial applications on all your mobile devices and tablets, be they produced by Google or Apple or whoever, are still to some extent subjective maps." There are, in other words, no perfect maps—just maps that (more-or-less) perfectly capture our understanding of the world at discrete moments in time.

Prepare For Change » Join an Event Support Group By joining or creating one of the “Event Support Groups” that are forming all over the world you are hopefully committing yourself to: Meeting physically in groups all over the world to join in weekly meditations with like-minded light workers. We also hope these groups will discuss how to further the Mission Statement of this website!We have offered “Suggested Meeting Guidelines” for your group to follow, however each Event Support Group can decide their own way to help complete the mission.The most important aspect of joining and participating with “The Event Support Group teams” is to be prepared for the changes coming at the time of the Event.

File:Nazi Germany.svg Cancel Edit Delete Preview revert Text of the note (may include Wiki markup) Could not save your note (edit conflict or other problem). How Protecting Your Privacy Could Make You the Bad Guy photo: Arm / Flickr There’s a funny catch-22 when it comes to privacy best practices. The very techniques that experts recommend to protect your privacy from government and commercial tracking could be at odds with the antiquated, vague Computer Fraud and Abuse Act (CFAA). A number of researchers (including me) recently joined an amicus brief (filed by Stanford’s Center for Internet and Society in the “Weev” case), arguing how security and privacy researchers are put at risk by this law. However, I’d also like to make the case here that the CFAA is bad privacy policy for consumers, too. It’s not just something that affects hackers and academics.

40 more maps that explain the world Maps seemed to be everywhere in 2013, a trend I like to think we encouraged along with August's 40 maps that explain the world. Maps can be a remarkably powerful tool for understanding the world and how it works, but they show only what you ask them to. You might consider this, then, a collection of maps meant to inspire your inner map nerd. Mapping Human Activity Activity tracking application Human has released a global interactive map showing one day of walking, running, cycling and transport undertaken by Human users in March of this year. One Day on Human provides an interesting visualization of where the Human app is being used around the world. A lot of people actually seem to be using the app not only as a fitness tracking app but to record their general movements. For example, people have been using the app to track themselves on ferry journeys around New York and on London's M25 orbital motorway.

Sumner Redstone, Sleeping with the Fishes What changed it all, as so often happens, was a woman. At the heart of Redstone's new life, in fact, is an unlikely love story, one he and Paula haven't discussed publicly until now. It began in 2001. Phyllis lived quietly in Boston, while he worked in New York. During the 1990s, Redstone more or less openly dated other women, notably Christine Peters, ex-wife of producer Jon Peters. Nothing, however, appeared to soften his sharp edges; subordinates viewed him as a crabby old man who scoffed at executives who left before seven at night.

The Best Reference Sites Online Whether you're looking for the average rainfall in the Amazon rainforest, researching Roman history, or just having fun learning to find information, you'll get some great help using my list of the best research and reference sites on the Web. About.com: I've found many answers to some pretty obscure questions right here at About.Reference.com.Extremely simple to use, very basically laid out.Refdesk.com.Includes in-depth research links to breaking news, Word of the Day,and Daily Pictures. A fun site with a ton of information.Encyclopedia.com. As stated on their site, Encyclopedia.com provides users with more than 57,000 frequently updated articles from the Columbia Encyclopedia, Sixth Edition.Encyclopedia Brittanica. One of the world's oldest encyclopedias online.Encarta.Put together by Microsoft.

The Beauty of Maps: A Documentary Here we bring you the 4 part BBC series, The Beauty of Maps. Released almost a year ago the documentary takes us through the staggering four million map collection of the British Library in London. Through the ages the story of the worlds landscape and population has been told through the creative and colorful use of maps. Often that tale has been destorted or idealized by the map maker, adding layers of history and revealing the society behind the maps making. Some examples are simply informational, the layout of streets and their names… others are highly beautiful, displaying a careful hand and creative mind.

Mapping Global Human Activity Air traffic routes between North America and Europe It is absolutely astonishing that our world has reached a population exceeding 7 billion, as of this past Sunday. With so many people occupying our world over many centuries, and with the number steadily growing, we're all bound to have had a significant impact on the planet.