The Quick 10: 10 Things You Probably Didn’t Know About <em>Harry Potter</em> 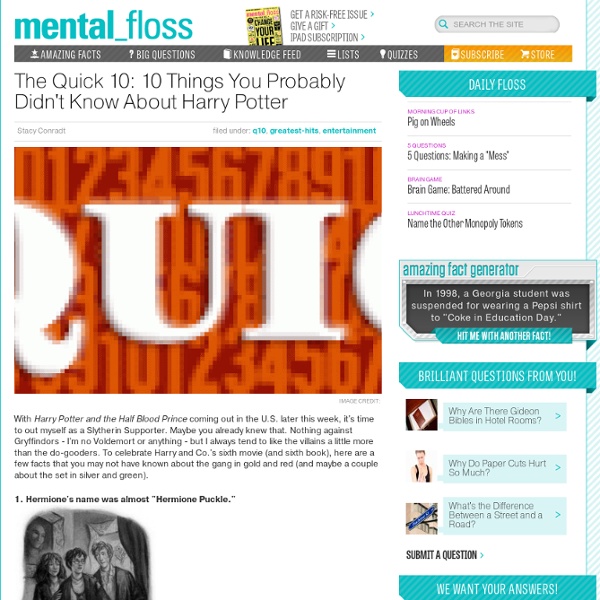 With Harry Potter and the Half Blood Prince coming out in the U.S. later this week, it's time to out myself as a Slytherin Supporter. Maybe you already knew that. Nothing against Gryffindors - I'm no Voldemort or anything - but I always tend to like the villains a little more than the do-gooders. To celebrate Harry and Co.'s sixth movie (and sixth book), here are a few facts that you may not have known about the gang in gold and red (and maybe a couple about the set in silver and green). 1. It has a sour tone to it, doesn't it? 3. 4. 5. 7. 8. 9. There's obviously a ridiculous amount of Harry Potter trivia out there, and since Harry Potter fever is about to sweep the world again, we might as well share it.

Greek Gods Family Tree / Genealogy Doing homework? Your teacher has already seen this. See Theoi; it has properly-sourced information. Known errors: Generally inconsistent sourcing. This chart was made in 2004, and Wikipedia was treated as a primary source. Top 8 Most Overused Horror Cliches in Movies Throughout film history certain conventions and themes are constantly reused no matter the time or place. The one genre that’s stayed consistent with the same formula throughout the years is horror. It doesn’t matter if it’s 1965 or 2007, the same stuff pops up in everything. The virgin girl will always prevail, while her slutty friend gets killed. There will never be cell phone reception when you need it, and somebody will always forget to lock the door behind them.

6 Baffling Attempts to Ride Harry Potters Coattails The kind of success J.K. Rowling has seen with the Harry Potter saga comes along maybe once in a generation. Lord of the Rings spawned an entire fantasy movement, Star Wars ushered in a new era of space opera and Harry Potter has brought the concept of magic out of the nerd closet and into the mainstream. Obviously, there will be some people looking to ride those sparkly robetails. Some of them do it a little more gracefully than others, however ... 15 Books You Should Have Read in 2010 - Culture - GOOD Image by Jane Mount, Courtesy 20x200 Yes, we read Freedom this year and yes, it was good. As Esquire put it, it “was one great slab of a book, at a time when most books have given up on greatness.” But there were other books in 2010, books that had to compete for our ever more challenged attention spans and won. So we asked a few members of the GOOD team & some of our good colleagues which book made their best list this past year. (And since discovering something you might have missed is one of the great pleasures of reading, no selections were disqualified for having been published prior to 2010).

Do not stand at my grave and weep Do Not Stand at My Grave and Weep is a poem written in 1932 by Mary Elizabeth Frye. Although the origin of the poem was disputed until later in her life, Mary Frye's authorship was confirmed in 1998 after research by Abigail Van Buren, a newspaper columnist.[1] Full text[edit] Family tree of the Greek gods - Wikipedia, the free encyclopedia - StumbleUpon Key: The essential Olympians' names are given in bold font. See also List of Greek mythological figures Pokemon's Ten Most Disturbing Pokedex Entries Last week, Pokemon Black and White were finally released in America as the two latest installments of the long-running video game franchise. It’s something I’ve been looking forward to since it was announced, to the point where I’ve been reading through the Pokedex — the official in-game database that describes all 649 Pokemon — and in doing so, I’ve discovered something: For a game made for children about adorable monsters, there’s a lot of really disturbing stuff in Pokemon. Okay, okay, admittedly: It’s a game made for children about adorable monsters who are sent out to fight each other for the enjoyment of their owners like gladiators battling at the pleasure of a ten year-old Caligula. But it’s one thing to have Mewtwo listed as being the product of “years of horrific gene splicing” (Pokemon Red), and quite another to have multiple creatures whose sole purpose is to drag children kicking and screaming through the gates of Hell, and that’s not an exaggeration.

Top 6 Reasons Harry Potter Isn't For Kids With Harry Potter and the Order of the Phoenix due soon in theaters and the book release of Harry Potter and the Deathly Hallows imminent, children, pre-teens and functionally retarded adults across America can sigh with relief: Their favorite boy wizard is back. But are kids, young adults and the mentally stupid Potter's target audience anymore? Both the films and their source material, J.K. Rowling's book series, have increasingly started to incorporate dark, violent subject matter. Happiness is like a butterfly; the more you chase it, the more it will elude you, but if y..... - Henry David Thoreau And now, something from our sponsor... There can be no peace now, we realize, but a common peace in all the world; no prosperity but a general prosperity. But there can be no common peace and prosperity without common historical ideas. Without such ideas to hold them together in harmonious co-operation, with nothing but narrow, selfish, and conflicting nationalist traditions, races and peoples are bound to drift towards conflict and destruction. You don't have to burn books to destroy a culture. Just get people to stop reading them.

Hawaiians Top 'Happiness' Survey (Infographic) The Aloha State seems to be having all the fun! And that's for a third year in a row, according to the Gallup Healthways Well-Being Index. The 2011 telephone survey was carried out between Jan. 2 and Dec. 29, 2011 and included a random sample of 353,492 adults, ages 18 and older, living in all 50 U.S. states and the District of Columbia. To understand state well-being, Gallup relied on six measures: life evaluation (self-evaluation about your present life situation and anticipated one in five years); emotional health; work environment (such as job satisfaction); physical health; healthy behavior; and basic access (access to health care, a doctor, a safe place to exercise and walk, and community satisfaction). Results showed that Hawaiians were the most likely to say they smiled or laughed a lot "yesterday," and the least likely residents to report daily worry or stress, or depression.

15 Movies from Your Childhood to Rewatch with Your Kids Watching movies with your kids is a great way to bond, not to mention introduce them to some of your favorite and most beloved films from when you were their age. It’s a win-win: they get the joy of watching something they've never seen before while you can bask in a nice dose of nostalgia. Here are 15 movies we loved when we were younger that we'd eagerly rewatch with our own children. 15. Hook (1991)

Culture Warrior: The Past and (Possible) Future of Harry Potter That the final Harry Potter film became the biggest opening weekend of all time seemed only natural and inevitable. Something so monumentally culturally pervasive could have only gone out with a loud bang. After all, it is – as I’ve been repeatedly reminded – the most successful movie franchise of all time, adapted from a series of books whose sales history rivals that of The Holy Bible. 58 Classic Novels In 33 Words Or Less & Clutch Blog “TL;DR” is internet-speak for “Too long; didn’t read.” You’ll see it used when some passionate nerd writes an exceptionally wordy comment or blog post. If one of your fellow online readers is nice enough, he or she will take the time to skim it and sum up the content in one snarky sentence. You’ll find these few words say essentially the same thing the obsessive author took a dissertation to explain.