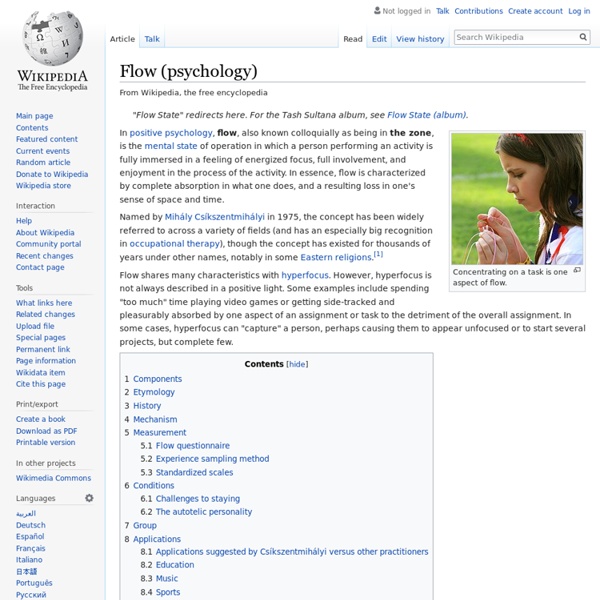 Concentrating on a task is one aspect of flow. In positive psychology, flow, also known colloquially as being in the zone, is the mental state of operation in which a person performing an activity is fully immersed in a feeling of energized focus, full involvement, and enjoyment in the process of the activity. In essence, flow is characterized by complete absorption in what one does, and a resulting loss in one's sense of space and time. Flow shares many characteristics with hyperfocus. However, hyperfocus is not always described in a positive light. Some examples include spending "too much" time playing video games or getting side-tracked and pleasurably absorbed by one aspect of an assignment or task to the detriment of the overall assignment. Just as with the conditions listed above, these conditions can be independent of one another. Ideas similar to flow have been recognized throughout history and across cultures. Schaffer (2013) proposed 7 flow conditions: Further, he writes: Notes

Nature Deficit Disorder Issue 260May/June 2010On Being Human Undercurrents Nature Deficit Disorder by Richard Louv Mentat Training Plan Getting really good at mental skills requires lots of practice. Just as you can only become a great pianist, sportsman or chess player with dedicated practice, most of the skills on this wiki - such as memory training, mental calculation, and logic - also need practice to get really good at them. So to reach the goal of becoming a better thinker, we need a training plan.

Welcome to Flow in Games Abstract | Introduction | Foundation | Design Flow in Games | Implement Flow in Games | Conclusion | Bibliography “TWENTY-THREE HUNDRED YEARS AGO Aristotle concluded that, more than anything else, men and women seek happiness...” - Mihaly Csikszentmihalyi (1990) Motivation In the last 30 years, as a form of entertainment, video games have evolved from confined arcade activities into a mature media. Video games have deeply infiltrated our daily life and our society. As if toys expanded every child’s imagination, modern videogames take advantage of a player's active involvement to open more possibilities than any other existing mediums.

Howard T. Odum - Wikipedia Howard Thomas Odum (also known as Tom or just H.T.) (September 1, 1924 – September 11, 2002) was an American ecologist. He is known for his pioneering work on ecosystem ecology, and for his provocative proposals for additional laws of thermodynamics, informed by his work on general systems theory. Biography[edit] PlanetRomeo » PlanetRomeo Things seem to improve in North and South America as well as in South-East Asia. That’s great news! Europe shows a huge diversity, from 'gay heaven' (Scandinavia) in the Northwest to 'gay drama' (Balkans) in the Southeasterly direction. Africa, Central Asia and the Middle East are depressing, but no big surprise there. In general, the number of countries where the situation is getting worse is painfully shocking to us. Our Romeos advised us to use international pressure and not to pamper homophobic political leaders.

Kundalini Experiences, Kundalini Awakening, Kundalini Raising, Yoga, Brahmajnana: Medha Nadi, Medha Nadi Activation, Medha Nadi Awakening, Meditation, Meditation Experience, Medhita, Spirituality, Sphurita, English/Other Language Words Dervied From Sanskr A word has many meanings. It can be used in various contexts to mean many different things. In this post, I have chosen some important Sanskrit words which may help you understand the origin of meditation and spirituality.Believe it or not: More than 60% of word roots of English are from Greek and Latin and 90% of English scientific terms are from Greek. You need to Google and find out. Some say it is 56% and some say it is more than 80-90% of English words in the dictionary are from other languages.

Home Page This wiki is a collaborative environment for exploring ways to become a better thinker. Topics that can be explored here include MemoryTechniques, MentalMath, CriticalThinking, BrainStorming, ShorthandSystems, NotebookSystems, and SmartDrugs. Other relevant topics are also welcome. Jesse Schell: Visions of the Gamepocalypse ALEXANDER ROSE:I'm Alexander Rose; I'm the Director of the Long Now Foundation. As some of you know who come to these talks every month we do a little short film before each talk which we call a "long short". This is a shortterm film that exemplifies longterm thinking. Our long short this month is called "Pixel". Alright enjoy. STEWART BRAND:I'm Stewart Brand from the Long Now Foundation.

Theodore Roszak, ’60s Expert, Dies at 77 Theodore Roszak, who three weeks after the in 1969 not only published a pivotal book about a young generation’s drug-fueled revolt against authority but also gave it a name — “counterculture” — died on July 5 at his home in Berkeley, Calif. He was 77. His wife, Betty, in confirming the death, said he had been treated for liver cancer and other illnesses. Dr. Roszak’s book “The Making of a Counter Culture: Reflections on the Technocratic Society” had gone to press months before the music festival was held in August that year, displaying the exuberance and excesses of a generation rebelling against war and seeking new ways to be and think. But in serendipitously timely fashion, the book provided what many regarded as a profound analysis of the youth movement, finding its roots in a sterile Western culture that had prompted young people to seek spiritual meaning in LSD, exotic religions and even comic books.