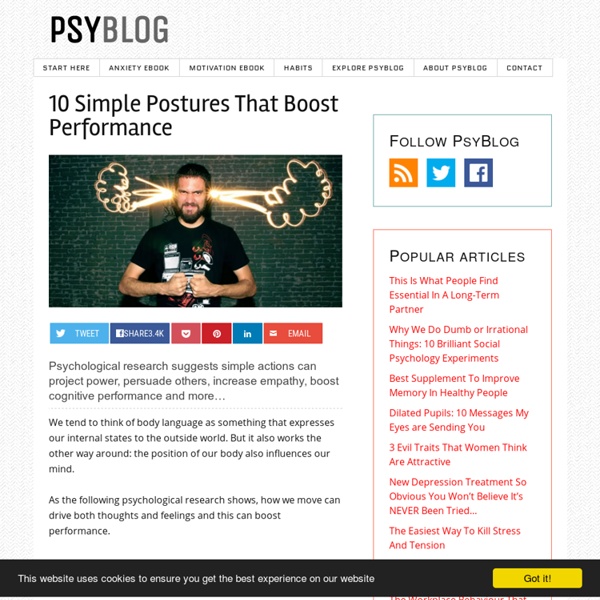 Psychological research suggests simple actions can project power, persuade others, increase empathy, boost cognitive performance and more… We tend to think of body language as something that expresses our internal states to the outside world. But it also works the other way around: the position of our body also influences our mind. As the following psychological research shows, how we move can drive both thoughts and feelings and this can boost performance. 1. Pose for power If you want to feel more powerful then adopt a powerful posture. 2. Tensing up your muscles can help increase your willpower. 3. If you’re stuck on a problem which needs persistence then try crossing your arms. 4. If crossing your arms doesn’t work then try lying down. 5. While you’re lying down, why not have a nap? Brooks & Lack (2005) compared 5, 10, 20 and 30 minute naps to find the best length. 6. The way people’s hands cut through the air while they talk is fascinating. 7. 8. 9. 10. Embodied cognition

10 Brilliant Social Psychology Studies Ten of the most influential social psychology experiments. “I have been primarily interested in how and why ordinary people do unusual things, things that seem alien to their natures.Why do good people sometimes act evil?Why do smart people sometimes do dumb or irrational things?” –Philip Zimbardo Like eminent social psychologist Professor Philip Zimbardo (author of The Lucifer Effect: Understanding How Good People Turn Evil), I’m also obsessed with why we do dumb or irrational things. 50 Ways to Waste a Life post written by: Marc Chernoff Email If you don’t go after what you want, you’ll never get it. If you don’t ask the right questions, you’ll always get the wrong answers.

Learned Helplessness The Misconception: If you are in a bad situation, you will do whatever you can do to escape it. The Truth: If you feel like you aren’t in control of your destiny, you will give up and accept whatever situation you are in. In 1965, a scientist named Martin Seligman started shocking dogs. He was trying to expand on the research of Pavlov – the guy who could make dogs salivate when they heard a bell ring.

Your Brain in Love: Scientific American Men and women can now thank a dozen brain regions for their romantic fervor. Researchers have revealed the fonts of desire by comparing functional MRI studies of people who indicated they were experiencing passionate love, maternal love or unconditional love. Together, the regions release neuro­transmitters and other chemicals in the brain and blood that prompt greater euphoric sensations such as attraction and pleasure. Conversely, psychiatrists might someday help individuals who become dan­gerously depressed after a heartbreak by adjusting those chemicals. Passion also heightens several cognitive functions, as the brain regions and chemicals surge.

Different Sex Positions - Great Sex Positions for Women - Womans Day Got pain? Pregnancy wishes? Confidence issues in the sack? We have a position for all that! Nerd Fitness: Lose Weight, Get Stronger, Live Better. I received an email a few months back from a NF reader that made me smile: “I am going back to square one. I noticed the only habit that I changed and stuck with was drinking tons of water.

Body Language Hacks: Be Confident and Reduce Stress in 2 Minutes There is a simple strategy that you can use to reduce anxiety, improve your ability to deal with stress, and boost your confidence. The best part? It works immediately and only takes two minutes to do. Here’s the deal… Color Psychology by David Johnson Like death and taxes, there is no escaping color. It is ubiquitous. Yet what does it all mean? Why are people more relaxed in green rooms?

Flow (psychology) Concentrating upon a task is one aspect of flow. In positive psychology, flow, also known as zone, is the mental state of operation in which a person performing an activity is fully immersed in a feeling of energized focus, full involvement, and enjoyment in the process of the activity. In essence, flow is characterized by complete absorption in what one does. Named by Mihály Csíkszentmihályi, the concept has been widely referenced across a variety of fields, though has existed for thousands of years under other guises, notably in some eastern religions.[1] Achieving flow is often referred to as being in the zone. According to Csikszentmihalyi, flow is completely focused motivation.