Greater Good: The Science of a Meaningful Life 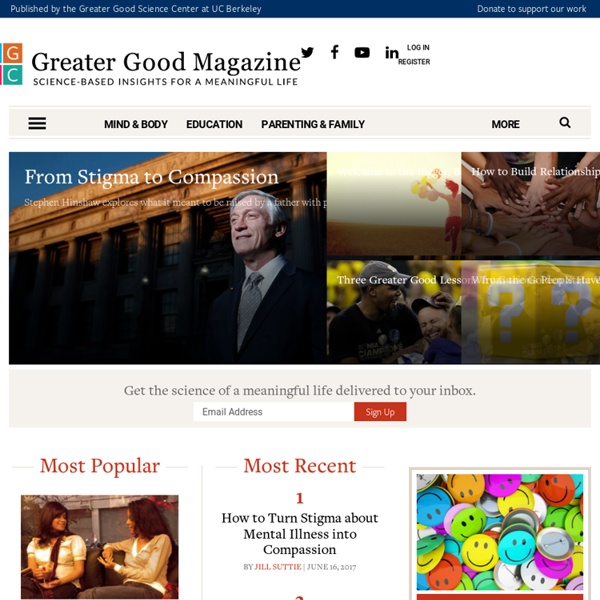 She was pressured to marry at age 14, but Shwapna wanted a different future When the results of the secondary school certificate examination were published, Mr. Based Ali wept. His 16-year-old daughter, Shwapna, had earned a perfect score and passed with highest marks. With the entire village gathered at Based’s house to celebrate, he decided it was time to publicly admit something that he had struggled with for many years. “Parents generally help their kids study,” he said. Now This Girl Knows How to Handle Street Harassment If you are a woman, odds are you have had this experience…. You’re walking down the street, perhaps thinking about your day and what you plan to accomplish. Then you hear a voice yelling at you, perhaps mixed with whistles or noises, saying something about your body or appearance. Sometimes it feels unclear whether or not you are allowed to feel offended by whatever was said, and sometimes it’s perfectly clear that the words are meant to reduce you to an object for sexual gratification. However, what’s almost never clear is exactly what you should say or do in this situation.

“The Little One” Finds Her Voice Pamoxong is not just convinced of the value of education in her own life, she’s determined to convince everyone in her village as well. Pamoxong actually plays a crucial role as a little “lobbyist” for education because she is also able to translate between the local ethnic language, Hmong, and the national Lao language. Many villagers in the town have never learned the Lao language, which poses a challenge for Room to Read staff who speak Lao. Especially in crucial times when Room to Read social mobilizers are paying visits to families with daughters at risk of dropping out. Pray the Devil Back to Hell This powerful documentary film has been screened at: · World Economic Forum· United Nations· U.S. Department of State· Ministry of Foreign Affairs at the Hague

E-TEAM Then they get to work — gathering crucial evidence to determine if further investigation is warranted and, if so, to investigate, document, and capture the world's attention. They also immediately challenge the responsible decision makers, holding them accountable. Human rights abuses thrive on secrecy and silence, and the work of the E-Team, backed by their international human rights organization, has shone light in dark places and given voice to thousands whose stories would never otherwise have been told. How to Survive a Plague Despite having no scientific training, these self-made activists infiltrated the pharmaceutical industry and helped identify promising new drugs, moving them from experimental trials to patients in record time. With unfettered access to a treasure trove of never-before-seen archival footage from the 1980s and '90s, filmmaker David France puts the viewer smack in the middle of the controversial actions, the heated meetings, the heartbreaking failures, and the exultant breakthroughs of heroes in the making. Blisteringly powerful, How To Survive A Plague transports us back to a vital time of unbridled death, political indifference, and staggering resilience and constructs a commanding archetype for activism today. Quotes "One of the 25 Best Films of The Year"— A.O.

Promises A beautiful and deeply moving portrait of seven Palestinian and Israeli children. Emmy award-winning and Academy award-nominated, PROMISES follows the journey of a filmmaker who meets these children in and around Jerusalem, from a Palestinian refugee camp to an Israeli settlement in the West Bank. Although they live only 20 minutes apart, these children exist in completely separate worlds, divided by physical, historical and emotional boundaries. The Crash Reel This eye-popping film seamlessly combines twenty years of stunning action footage with new specially-shot verité footage and interviews as it follows U.S. champion snowboarder Kevin Pearce and exposes the irresistible but potentially fatal appeal of extreme sports. An escalating rivalry between Kevin and his nemesis Shaun White in the run-up to the 2010 Olympics leaves Shaun on top of the Olympic podium and Kevin in a coma follow- ing a training accident in Park City, Utah. Kevin's tight-knit Vermont family flies to his side and helps him rebuild his life as a brain injury survivor. But when he insists he wants to return to the sport he still loves, his family intervenes with his eloquent brother David speaking for all of them when he says, “I just don’t want you to die.” Kevin’s doctors caution him that even a small blow to the head could be enough to kill him.

The World Before Her The Miss India pageant is the ultimate glamour event in a country that has gone mad for beauty contests. Winning the coveted title means instant stardom, a lucrative career path and, for some girls, freedom from the constraints of a patriarchal society. Through dramatic verite action and unprecedented behind-the-scenes access, The World Before Her sweeps back the curtain to reveal the intimate stories of twenty young women determined to win the crown. As the beauty contestants move through beauty boot camp, Director Nicha Pahuja travels to another corner of India to visit a different camp for young girls, the women's wing of the militant fundamentalist movement. Through lectures and physical combat training, these girls learn what it means to be good Hindu women and how to fight against Islam, Christianity and the onslaught of Western culture.

65 Red Roses Redefining the traditional scope of documentary film in an electronic age, 65_RedRoses leaves viewers with a new appreciation of life and the digital world. This personal and touching journey takes an unflinching look into the life of Eva Markvoort as she battles the fatal disease Cystic Fibrosis (CF) and waits on the transplant list for new organs. At 23, Eva needs a double lung transplant to live. Girl Rising Nine unforgettable girls – striving beyond circumstance, pushing past limits – spotlighted in a film about the strength of the human spirit and the power of education to change the world. With stories by nine celebrated writers, voiced by nine renowned actresses including Meryl Streep and Salma Hayek, Girl Rising introduces Sokha, an orphan who rises from a Cambodian dump to become a star pupil; Suma, who writes music to endure forced servitude in Nepal; Ruksana, an Indian “pavement-dweller” whose father sacrifices his own needs for her dreams; and six other heroines. The girls are unique, but the obstacles they face are ubiquitous.

Books with Strong Female Characters Get our best picks for movies, apps, TV shows, books, and more, customized for your kids. Get the App Get the App