EatPES - Home of the Twisted Films of PES 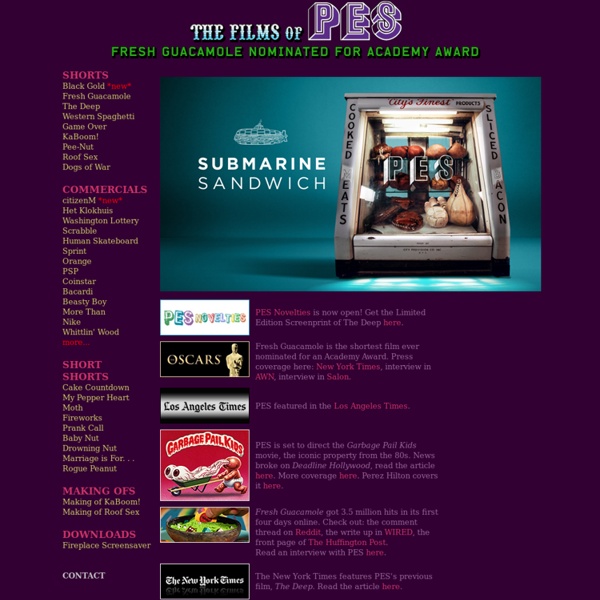 Joseph Cornell: Navigating The Imagination Launch Page American artist Joseph Cornell (1903–1972) has been celebrated internationally for his boxes, collages, and films since the 1930s. His mining of far-flung ideas and traditions and elegant integration of woodworking, painting, papering, and drawing define the innovation and visual poetry associated with his work. Above all, he forever altered the concept of the box—from a time-honored functional container into a new art form, the box construction. Although Cornell’s exploration of art, culture, and science was highly personal, even spiritual, his goal as an artist was to inspire others to pursue uplifting voyages into the imagination. This exhibition is organized thematically to suggest his understanding of the imagination as an echo chamber where possibilities and connections can be discovered through subtle repetition and variation.

Snowflake Template Patterns for young children to fold and cut As I was learning about all the different snow crystal classifications symbols I thought about applying a few to my folding pattern templates so that children and other interested parties could take a crack at making a snowflake based upon a scientific symbol. Snowflakes come in more than just the 6-sided variety, so I made formats for the 12, 2 and 3 sided as well as the more common 6 sided shapes. The 4 sided shapes are provided just for their entertainment since there are no 4 sided snow flakes in nature. Snowflakes begin as hexagonal shaped tiny particles of ice that do not shapeshift into squares.

Must Watch Documentaries Real Scientific Evidence of Controlled Implosion "The preconceived notion of NIST is that there's no evidence for explosives, as in there is no point in looking. That is the most unscientific thing which you can possibly think of. Not to look because you don't expect to find evidence and in fact the evidence is overwhelming. They state these conclusions for which there is no evidence and then they ignore conclusions that can be drawn from the evidence." -Lynn Margulis, PH.D, Scientist/Professor, University of Massachusetts

Found object Found objects derive their identity as art from the designation placed upon them by the artist and from the social history that comes with the object. This may be indicated by either its anonymous wear and tear (as in collages of Kurt Schwitters) or by its recognizability as a consumer icon (as in the sculptures of Haim Steinbach). The context into which it is placed (e.g. a gallery or museum) is also a highly relevant factor. The idea of dignifying commonplace objects in this way was originally a shocking challenge to the accepted distinction between what was considered art as opposed to not art.

D.I.Y Tutorials from ScrapHacker.com Neon Renewal – 5 D.I.Y ideas Posted by ScrapHacker.com on mars 12, 2012 · 3 Comments Let a dash of D.I.Y neon spruce up your spring. I’ve gathered 5 doable examples to inspire some neon renewal and revamping of an old pair of shoes, a clutch, a purse, some glass bottles and your hallway mirror. Link to tutorials under each pic – Enjoy! art collection The Andy Warhol Museum, Installation, Skulls, ©AWF, photo by Paul Rocheleau Over the course of his career, Andy Warhol transformed contemporary art. Employing mass-production techniques to create works, Warhol challenged preconceived notions about the nature of art and erased traditional distinctions between fine art and popular culture. The Andy Warhol Museum's permanent collection is comprised of more than 8,000 works of art by Warhol including paintings, drawings, prints, photographs, sculpture, film, videotapes, and an extensive archives that consists of ephemera, records, source material for works of art, and other documents of the artist's life. Together, the art and archives make The Andy Warhol Museum the most comprehensive single-artist museum in the world.

Man Ray (American, 1890–1976) American photographer and painter. He was brought up in New York, and he adopted the pseudonym Man Ray as early as 1909. He was one of the leading spirits of Dada and Surrealism and the only American artist to play a prominent role in the launching of those two influential movements. Throughout the 1910s he was involved with avant-garde activities that prefigured the Dada movement. After attending drawing classes supervised by Robert Henri and George Bellows at the Francisco Ferrer Social Center, or Modern School, he lived for a time in the art colony of Ridgefield, NJ, where he designed, illustrated and produced several small press pamphlets, such as the Ridgefield Gazook, published in 1915, and A Book of Diverse Writings. Demonstrating a flair for diplomacy, which later served him well among the Surrealists, Man Ray was one of the few artists to be admitted to both of New York’s avant-garde circles.