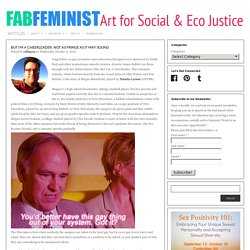 This romantic comedy, which borrows heavily from the visual styles of John Waters and Tim Burton, is the story of Megan Bloomfield, played by Natasha Lyonne (OITNB). Megan is a high school cheerleader, dating a football player, but her parents and boyfriend suspect correctly that she is a closeted lesbian. Unable to accept her as she is, her family sends her to True Directions, a hellish rehabilitation center with pink-or-blue everything, overseen by Mary Brown (Cathy Moriarty) and Mike, an ex-gay graduate of True Directions, played by an out-of-drag RuPaul.

At True Directions, the campers are given pink and blue outfits (pink for girls, blue for boys), and are given gender-specific tasks to perform. Link Love: LGBTQI Week: ‘But I’m a Cheerleader’ This is a guest review by Erin Fenner. 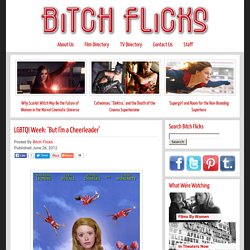 But I’m a Cheerleader, directed by Jamie Babbit, plays with stereotypes. But not like, “haha let’s use broad generalizations to create characters, but never develop them.” No, this film paints everything pink and blue (pretty much literally) and then asks the audience: Really? Is this what gender and sexuality should look like? It’s even in the title. It takes an intervention and her parents’ sending her to a “pray away the gay” sort of camp, for Megan to realize she’s gay. Sapphic Cinema: "But I'm a Cheerleader" But I’m A Cheerleader is one of the five best lesbian movies ever made. 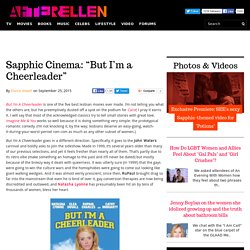 I’m not telling you what the others are, but I’ve preemptively dusted off a spot on the podium for Carol; I pray it earns it. I will say that most of the acknowledged classics try to tell small stories with great love. Imagine Me & You works so well because it is doing something very simple: the prototypical romantic comedy. But Im A Cheerleader Important LGBTQ Movies. But I'm a Cheerleader is 15 years old. 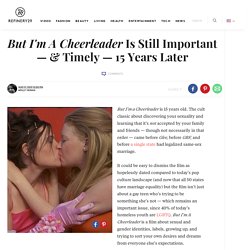 The cult classic about discovering your sexuality and learning that it's not accepted by your family and friends — though not necessarily in that order — came before Glee, before GBF, and before a single state had legalized same-sex marriage. It could be easy to dismiss the film as hopelessly dated compared to today's pop culture landscape (and now that all 50 states have marriage equality) but the film isn't just about a gay teen who's trying to be something she's not — which remains an important issue, since 40% of today's homeless youth are LGBTQ. But I'm A Cheerleader is a film about sexual and gender identities, labels, growing up, and trying to sort your own desires and dreams from everyone else's expectations. But I'm A Cheerleader is also a movie about trying to fit in to a certain image, even within the LGBTQ community. 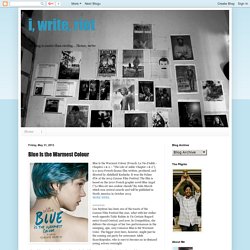 It won the Palme d'Or at the 2013 Cannes Film Festival. The film is based on the 2010 French graphic novel Blue Angel ("Le Bleu est une couleur chaude")by Julie Maroh which won several awards and will be published in North America in October 2013.MORE HERE. >>>>>>> Lea Seydoux has been one of the toasts of the Cannes Film Festival this year, what with her stellar work opposite Tahir Rahim in Un Certain Regard entry Grand Central, and now, In Competition, she delivers the stronger of her two performances in the sweeping, epic, sexy romance Blue is the Warmest Color. Stillpoint Staff Series: Film Reflection – A Contemporary Bildungsroman. Spoiler alert! 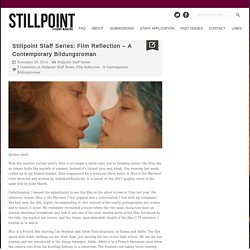 With the weather turned wintry, blue is no longer a warm color you’re thinking about—the blue sky no longer holds the warmth of summer. Instead it’s turned grey and bleak. Is Blue a Straight Color?: On "Blue is the Warmest Color" and Representing Lesbians. Cinema is epistemology, and when one film commands attention perhaps unequal to its merit, it is often because of the worldview it espouses. 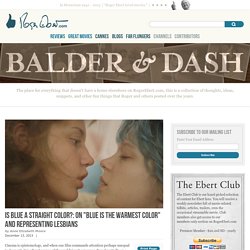 Based partially on a graphic novel by Julie Maroh (called "Le Bleu est une couleur chaude" and slated for US release later this year), "Blue Is the Warmest Color" has galvanized critical conversation around the right of a straight man, director Abdellatif Kechiche, to portray feminine sexuality. It's an extension of concerns plaguing all media at the moment, wherein the gender and sexual identities of real living people are vocabularized, dramatized, and imagined. It is a particularly poignant criticism in cinema, however, where according to the Center for the Study of Women in Television and Film, women made up only 9 percent of the directors of the top 250 highest-grossing movies in 2012—just as they did in 1998.

Whether the unprecedented move was intended to acknowledge their agency or undercut his, we may never know. Epistemology becomes text. Gender and Sexual Identity in Blue is the Warmest Color. When I first watched Blue is the Warmest Color (French), I was astounded by this unique love story and the superb performances by Adele Exarchopoulos and Lea Seydoux.

This story has so much passion in it, and it comes from the writing, the actors, and the direction of Abdellatif Kechiche. As we know, same-sex marriage became legal in France last year, so this film is important to the gay and lesbian community in France. Blue is the Warmest Color and the Lesbian Experience. Blue Is The Warmest Color: The Male Gaze Reigns Supreme. 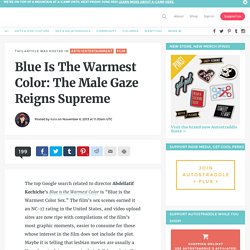 The film’s sex scenes earned it an NC-17 rating in the United States, and video upload sites are now ripe with compilations of the film’s most graphic moments, easier to consume for those whose interest in the film does not include the plot. Maybe it is telling that lesbian movies are usually a Herculean task to procure in their full form, but all too easy to find as prolifically uploaded sex scene super-cuts. It doesn’t take an art history major to tell you about the history of female bodies being objectified and commodified, but if you’re looking for a primer in all the ways that modern media is still failing queers, this film is a good start. Classifying Blue Is the Warmest Color. A galvanizing conversation starter since its Cannes premiere, Blue Is the Warmest Color has rather persistently been positioned as a “lesbian” film, particularly in the popular press. 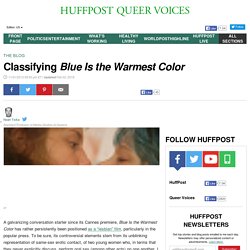 Blue is the Warmest Color Screencaptures and Promo Images

Fear of Water, The New Must See Movie. Lily Loveless stars in an award winning film, exploring female sexuality and identity Published: KL Dream Pictures and M4West Media have joined forces to bring to the screen promising young director Kate Lane’s own personal and intimate story. Fear of Water has already been screened at six international film festivals and picked up two awards at the Monaco International Film Festival for Best Actor and Best Original Score. The film stars Lily Loveless (Skins) as Alexia and newly discovered talent Chloe Partridge as Eleanor. The story revolves around two teenage girls who come from different socio-economic backgrounds. Lily Loveless can't save "Fear of Water" from drowning. Fear of Water Starring Lily Loveless Directed by Kate Lane. Not (Just) Another Queer Movie: My Afrofeminist Review of Pariah - QWOC Media Wire. Originally published at spectraspeaks.com Wait a minute, not all lesbians in movies are white, rich or middle-class with no bills to pay?

You mean “life” doesn’t get put on pause so that all gay people can experience the thrill of coming out at summer camp? And, there are other LGBT issues worth talking about besides marriage? LGBTQI Week: "I’m Not Running, I’m Choosing": ‘Pariah’ and Gender Performance. Warning: spoilers ahead!! “Who do you become if you can’t be yourself?” Pariah, my absolute favorite film of 2011, tackles that question.

Written and directed by Dee Rees and produced by Nekisa Cooper, the powerful Pariah tells the story of Alike (Adepero Oduye in an astounding performance), a 17-year-old black lesbian in Brooklyn. Studious, artistic and sensitive, Alike is a writer who knows who she is but hides her sexuality from her family. We so rarely see positive portrayals of black women and queer women on-screen. Bechdel Test Canon: Pariah. ‘Pariah’ Reveals Another Side of Being Black in the U.S. Video EARLY in Dee Rees’s film it journeys into a Brooklyn strip club where scantily clad young black women gyrate to a sexy, foul-mouthed rap song.

Lascivious customers leer, toss money and revel in their own unbridled lust. It is a scene that could have been in any of “the hood movies” that once proliferated or even a Tyler Perry melodrama in which Christian values would be affirmed after this bit of titillation. Black Queer Gender and Pariah’s “Grand Swagger” - The Feminist Wire. Three white women crowd the ticket window. The Feminist Spectator. OUT IN THE NEIGHBORHOOD: DEE REES’ “PARIAH” Originally published in the Fall 2011 issue. LGBTQ Representation, feminism & doing what’s right: Director Katherine Brooks talks. Loving Annabelle director and writer Katherine Brooks thinks an entertainment utopia would look like balance. The state of television today isn’t one that accurately represents the LGBTQ community and with the #LGBTFansDeserveBetter movement still going strong, Brooks has planned a return to television production to do her part to usher the industry in the right direction.

With popular MTV shows from the Emmy Award winning The Osbournes to Newlyweds: Nick and Jessica under her belt — her ability to satisfy the folks concerned over ratings combined with her desire to promote fairness when it comes to representation is exactly what the industry needs. A member of the Directors Guild of America, the 40-year-old who has directed shows for NBC, ABC and Bravo has also received recognition as she earned the LACE Award for Arts and Entertainment, which honours women who have made a difference in the entertainment community. The Feminist Spectator. Review of "Bloomington"

An Interview with Bloomington Director Fernanda Cardoso. Bloomington. For better or worse, sometimes after watching a film, it takes up a little space in my head and won’t go away until it’s had its say.