Stan Lee: Spider-Man should stay white and straight. After a new set of leaked Sony emails revealed a restrictive set of rules for Spider-Man’s on-screen persona, the character’s creator, Stan Lee, has spoken out in support of the controversial stipulations. 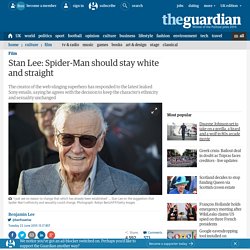 The rule that says Peter Parker, Spidey’s alter ego, should always be white doesn’t bother Lee, according to an interview he gave to entertainment site Newsarama. “I wouldn’t mind, if Peter Parker had originally been black, a Latino, an Indian or anything else, that he stay that way,” he said. “But we originally made him white. I don’t see any reason to change that.”

Lee is also in agreement with the requirement that Parker’s sexuality should remain as originally written, but is open to the idea of other homosexual comic book characters. “I think the world has a place for gay superheroes, certainly,” he said. Lee was also keen to point out that his remarks had nothing to do with bigotry, but rather with staying true to his work. Black Bonds, Annie and OITNB: How Film and TV Representation limits, liberates, and moulds People of Colour. By Otamere Guobadia Follow @otamere In the wake of the Sony Leaks and the ‘Annie’ reboot starring Quvenzhané Wallis, the Black Bond debate, questions of representation have received renewed interest. 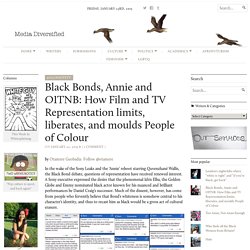 A Sony executive expressed the desire that the phenomenal Idris Elba, the Golden Globe and Emmy nominated black actor known for his nuanced and brilliant performances be Daniel Craig’s successor. Much of the dissent, however, has come from people who fervently believe that Bond’s whiteness is somehow central to his character’s identity, and thus to recast him as black would be a gross act of cultural erasure. White online commenters, such as those on the Mail Online, have once again shown a distinct lack of self-awareness. Bodies and faces like theirs have played the hero in movies for so long, that it is unimaginable to feel themselves thrust from the driver’s seat. Our bodies and our realities become mirrored in characters that we might empathise with. Representation matters.

Narration in Film (revised version; uploaded 22 April 2014) Defining Documentary Film. Raising a question When I ask the students in my film classes at the university if they can define or at least somehow describe what makes a film a documentary, they usually come up with answers like this: "It is a type of film that is based on the real world and real people, depicting things as they are or telling about historical events in a supposedly truthful or objective manner. 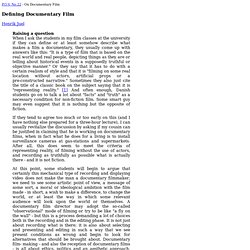 " Or they say that it has to do with a certain realism of style and that it is "filming on some real location without actors, artificial props or a pre-constructed narrative. " Sometimes they also just cite the title of a classic book on the subject saying that it is "representing reality. " [1] And often enough, Danish students go on to talk a lot about "facts" and "truth" as a necessary condition for non-fiction film. Some smart guy may even suggest that it is nothing but the opposite of fiction. Definitions can be of many sorts, depending on how strict we want to be. Ways of being true. Critical Studies in Television - Scholarly Studies for Small Screen Fiction. AfterEllen.com News, Reviews & Commentary on Lesbian and Bisexual women in Entertainment and the Media. 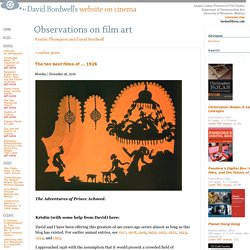 Kristin (with some help from David) here: David and I have been offering this greatest-of-90-years-ago series almost as long as this blog has existed. For earlier annual entries, see 1917, 1918, 1919, 1920, 1921, 1922, 1923, 1924, and 1925. I approached 1926 with the assumption that it would present a crowded field of masterpieces; surely it would be difficult to choose ten best films. Instead it turned out that some of the greatest directors of the era somehow managed to skip this year or turn in lesser films.

Still, the Soviet directors were going full-tilt by this time and contribute three of the ten films on this year’s list. The Russians are coming Vsevolod Pudovkin’s Mother was a full-fledged contribution to the new Montage movement in the Soviet Union. Along with Potemkin, Mother was one of the key founding films of the Montage movement. Mother was released on DVD by Image Entertainment in 1999, but it seems to be very rare. Petit mais grand. Digital Literacy. Dumb Ways to Die: 10 great Australian adverts. When I say I’m a copywriter people often ask if it’s just like being Peggy Olson in Mad Men. 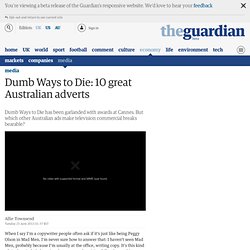 I'm never sure how to answer that: I haven’t seen Mad Men, probably because I’m usually at the office, writing copy. It's this kind of single-minded obsession that means advertising folk value nothing more than a good backpat; reassurance that the long nights and bad dinners are worth it. And the biggest backpat of all is Cannes.

The Cannes Lions Festival of Creativity (which weirdly omits the word advertising) has just come to a close.