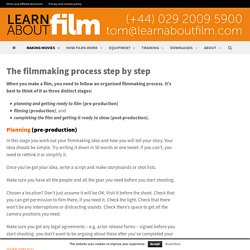 It’s best to think of it as three distinct stages: planning and getting ready to film (pre-production)filming (production), andcompleting the film and getting it ready to show (post-production). Planning (pre-production) In this stage you work out your filmmaking idea and how you will tell your story. Your idea should be simple. King Film School. Writing a Great Story Storyboarding like Pro The History of Storyboarding Formatting a Script in 60 Seconds Creating Awesome Props History of the Movie Camera Cool Camera Angles Directing The 180 Degree Rule How to Light your Movies Basics of Timelapse Photography How to Film in Low Light and make it look Good Editing your Film History of Editing How I learned Visual Effects – w/ VFX Bro Getting Started in Visual Effects How to Approach Visual Effects How I Became a Music Composer – w/ Andrew Gerlicher How to Get Started in Film Composing Gear to Start Your Studio Relationship Between the Director and Composer. 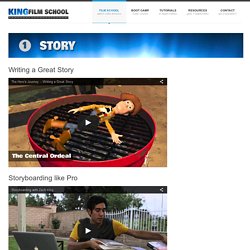 Pre-Production Process for a Short Film. How to Make A Short Film: Important Tips and Advice. Film planning templates - Learn about film. Here are some free templates in PDF format which you can print out and use to help plan your film. 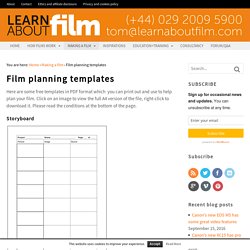 Click on an image to view the full A4 version of the file, right-click to download it. Please read the conditions at the bottom of the page. Storyboard You can use this for planning how to shoot a scene and making sure your shots will make sense together. Put drawings of your shots in the boxes on the left, and descriptions of the images and sound in the other two columns. Shot list You don’t always need a storyboard. Logging sheet If your film has more than a few shots, you’ll need to review each clip you’ve filmed before you edit. Documentary script You can use this simple template to plan a documentary or a news item.

All of these resources are copyright © Learnaboutfilm Ltd. Top 15 Mistakes Beginner Filmmakers Make. How to make a film with your iPhone or iPad. 9 August 2016 What you need You can use any current iPhone, iPad – or the iPod Touch – for filmmaking. 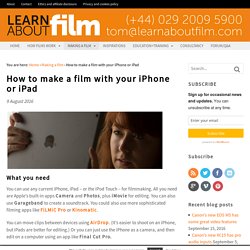 All you need are Apple’s built-in apps Camera and Photos, plus iMovie for editing. You can also use Garageband to create a soundtrack. You could also use more sophisticated filming apps like FiLMiC Pro or Kinomatic. You can move clips between devices using AirDrop. Shaky video is the number one fault with iPhone video. If you’re planning to use live sound, you may need a microphone as well. Choosing iPhones, iPads, accessories and apps for filmmaking What kind of film can you make with an iPhone or iPad? You can make pretty much any kind of film with an iOS device. The built-in mic isn’t great outdoors, so it’ll be easier to make a film that doesn’t rely on live sound. You could use an interview or presentation to camera, and then overlay cutaways (so you see the presenter speaking, then you see clips of what they’re talking about).

Factual film example from Tom Barrance on Vimeo. Tap the ? Cinematic Camera Angles & Movement. Camera Angles with Zach King. Editing - Learn about film. Editing is one of the most interesting and rewarding parts of making a short film or video. 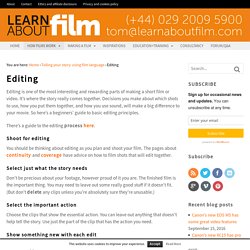 It’s where the story really comes together. Decisions you make about which shots to use, how you put them together, and how you use sound, will make a big difference to your movie. So here’s a beginners’ guide to basic editing principles. There’s a guide to the editing process here. Shoot for editing You should be thinking about editing as you plan and shoot your film.

Select just what the story needs Don’t be precious about your footage, however proud of it you are. Select the important action Choose the clips that show the essential action. Show something new with each edit Show a different subject, or a different view of the same thing: a different shot size or camera position. Vary the shot size and angle Don’t cut between two very similar shots of the same thing, unless you really want a ‘jump cut’ for effect. Step between shot sizes Use cutaways to hide jumpy edits.