Charles Limb: Your brain on improv 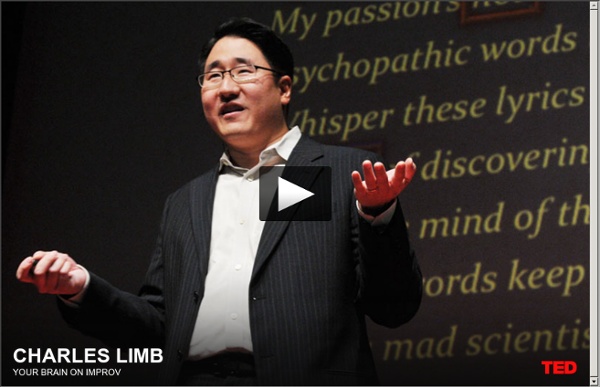 The Science of "Chunking," Working Memory, and How Pattern Recognition Fuels Creativity by Maria Popova “Generating interesting connections between disparate subjects is what makes art so fascinating to create and to view… We are forced to contemplate a new, higher pattern that binds lower ones together.” It seems to be the season for fascinating meditations on consciousness, exploring such questions as what happens while we sleep, how complex cognition evolved, and why the world exists. Why Does Music Make Us Feel? As a young man I enjoyed listening to a particular series of French instructional programs. I didn’t understand a word, but was nevertheless enthralled. Was it because the sounds of human speech are thrilling? Not really. Speech sounds alone, stripped of their meaning, don’t inspire.

The Brain Needs Downs to Have Ups Four neurochemicals cause happiness : endorphins, dopamine , oxytocin and serotonin. Each evolved to do a different job. When you know what the job is, you know why your happy chemicals can't be on all the time. 1. How music touches the brain Finnish researchers have developed a new method that makes it possible to study how the brain processes various aspects of music such as rhythm, tonality and timbre. The study reveals how a variety of networks in the brain, including areas responsible for motor actions, emotions, and creativity, are activated when listening to music. According to the researchers, the new method will increase our understanding of the complex dynamics of brain networks and the way music affects us. Responding to Argentinian tango Using functional magnetic resonance imaging (fMRI), the research team, led by Dr. Vinoo Alluri from the University of Jyväskylä, Finland, recorded the brain responses of individuals who were listening to a piece of modern Argentinian tango.

The Benefits of Music Education . Music & Arts . Education Whether your child is the next Beyonce or more likely to sing her solos in the shower, she is bound to benefit from some form of music education. Research shows that learning the do-re-mis can help children excel in ways beyond the basic ABCs. More Than Just Music Research has found that learning music facilitates learning other subjects and enhances skills that children inevitably use in other areas. “A music-rich experience for children of singing, listening and moving is really bringing a very serious benefit to children as they progress into more formal learning,” says Mary Luehrisen, executive director of the National Association of Music Merchants (NAMM) Foundation, a not-for-profit association that promotes the benefits of making music. Making music involves more than the voice or fingers playing an instrument; a child learning about music has to tap into multiple skill sets, often simultaneously.

Enrst Strüngmann Forum - Language, Music, and the Brain - Photos Ernst Strüngmann Forum Music, Language, and the Brain A Mysterious Relationship Sunday Opening Session Click <<here>> for an index of all the images LAPhil and USC neuroscientists launch 5-year study of music education and child brain development The Los Angeles Philharmonic Association, the USC Brain and Creativity Institute and Heart of Los Angeles (HOLA) are delighted to announce a longitudinal research collaboration to investigate the emotional, social and cognitive effects of musical training on childhood brain development. The five-year research project, Effects of Early Childhood Musical Training on Brain and Cognitive Development, will offer USC researchers an important opportunity to provide new insights and add rigorous data to an emerging discussion about the role of early music engagement in learning and brain function. Starting when the children are between the age of 6 and 7, to ages 11 and 12, the researchers will use standard psychological assessments and advanced brain imaging techniques to track brain, emotional and social development.

The Mozart Effect In the last few years, a lot of attention has been drawn to scientific experiments designed to prove or disprove what is called "the Mozart effect". It began with an experiment in which two groups of people were given a test on spatial skills—one group had previously listened to 10 minutes of a Mozart concerto, the other sat in silence. The result was a significantly better performance by the group that had listened to the Mozart concerto. People were surprised at the result. They shouldn't have been. Certainly psychologists shouldn't have been surprised.

The Health Benefits Of Listening To Music By Dr Mercola If you’re a music lover, you already know that turning on the tunes can help calm your nerves, make stress disappear, pump up your energy level during a workout, bring back old memories, as well as prompt countless other emotions too varied to list. Even if you’re not a music aficionado, per se, there are compelling reasons why you may want to become one, which were recently revealed by a series of new research. Music Prompts Numerous Brain Changes Linked to Emotions and Abstract Decision Making When you listen to music, much more is happening in your body than simple auditory processing. Music triggers activity in the nucleus accumbens, a part of your brain that releases the feel-good chemical dopamine and is involved in forming expectations.

Listening to Music Prompts Numerous Brain Changes By Dr. Mercola If you’re a music lover, you already know that turning on the tunes can help calm your nerves, make stress disappear, pump up your energy level during a workout, bring back old memories, as well as prompt countless other emotions too varied to list.Even if you’re not a music aficionado, per se, there are compelling reasons why you may want to become one, which were recently revealed by a series of new research. Music Prompts Numerous Brain Changes Linked to Emotions and Abstract Decision Making

Charles Limb studies the neurology of music and creativity. In this TED talk he shows fMRI contrast maps of his experiments with people playing memorised music versus people improvising music. He shows that the activity in the lateral prefrontal cortex, which is involved in self-monitoring, lowers. And activity in the medial prefrontal cortex goes up. Next he shows what happens when musicians improvise together. The language areas, i.e. Broca's area, became more active. The third experiment is about memorised rap versus freestyle rap: then you see activity in the visual areas and motor coordination areas, so lots of brains areas aree active in creative rapping. by kaspervandenberg Jan 9