There Is a Longevity Pill Backed by Five Nobel Prize Winners. Nanotechnology and Radically Extended Life Span - Life Extension. A revolution in medical technology looms large on the horizon. 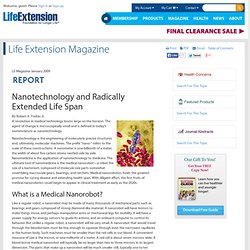 The agent of change is microscopically small and is defined in today’s nomenclature as nanotechnology. Nanotechnology is the engineering of molecularly precise structures and, ultimately, molecular machines. The prefix “nano-” refers to the scale of these constructions. A nanometer is one-billionth of a meter, the width of about five carbon atoms nestled side by side. Nanomedicine is the application of nanotechnology to medicine. What is a Medical Nanorobot? United Patients Group Remembers Child Medical Marijuana Pioneer Cash Hyde on Anniversary of His Death. When 4-year-old brain cancer patient Cash “Cashy” Hyde passed away last year, it was unheard of for children to use medical marijuana. 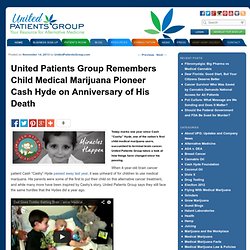 His parents were some of the first to put their child on this alternative cancer treatment, and while many more have been inspired by Cashy’s story, United Patients Group says they still face the same hurdles that the Hydes did a year ago. “Cash and his family are truly the pioneers of using medical cannabis for children,” said John Malanca, founder and owner of United Patients Group. “They laid the groundwork for other families to consider alternative medicine by being very vocal about their story and educating the public about their successes and struggles, but there’s still so much that we need to do.” Cash famously made headlines when his father, Mike Hyde, added cannabis oil to his son’s feeding tubes without doctor’s approval and saw significant improvement almost instantly. Natural Health News and Wellness Tips: California Measles: 85% of Those Contracting It Are Fully Vaccinated. 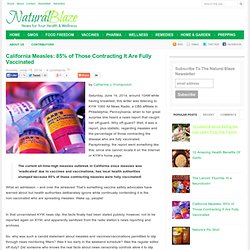 Frompovich Saturday, June 14, 2014, around 10AM while having breakfast, this writer was listening to KYW 1060 All News Radio, a CBS affiliate in Philadelphia, Pennsylvania, when to her great surprise she heard a news report that caught her off-guard. Home. Homotoxicology (Part 3) - Theory of high dilutions and experimental aspects - Prof Kirkman.

Explanation of a hydrogen bond. Confirming a controversal prediction first made by famous chemist Linus Pauling, a new experiment has shown that the bizarre rules of the quantum world cause the weak "hydrogen bonds" in water molecules to get part of their identity from stronger "covalent" bonds within H2O. 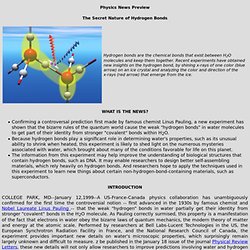 Because hydrogen bonds play a significant role in determining water's properties, such as its unusual ability to shrink when heated, this experiment is likely to shed light on the numerous mysteries associated with water, which brought about many of the conditions favorable for life on this planet. The information from this experiment may help improve the understanding of biological structures that contain hydrogen bonds, such as DNA. It may enable researchers to design better self-assembling materials, which rely heavily on hydrogen bonds. 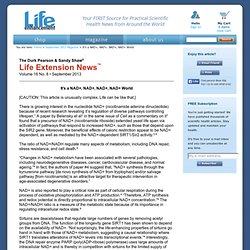 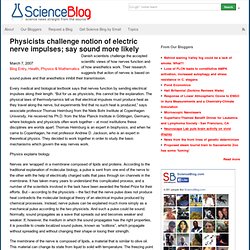 Their research suggests that action of nerves is based on sound pulses and that anesthetics inhibit their transmission. Every medical and biological textbook says that nerves function by sending electrical impulses along their length. “But for us as physicists, this cannot be the explanation. The physical laws of thermodynamics tell us that electrical impulses must produce heat as they travel along the nerve, but experiments find that no such heat is produced,” says associate professor Thomas Heimburg from the Niels Bohr Institute at Copenhagen University. He received his Ph.D. from the Max Planck Institute in Göttingen, Germany, where biologists and physicists often work together – at most institutions these disciplines are worlds apart.

Physics explains biology Nerves are ‘wrapped’ in a membrane composed of lipids and proteins. Thanks for the memory. A bout homeopathy, Professor Madeleine Ennis of Queen's University Belfast is, like most scientists, deeply sceptical. 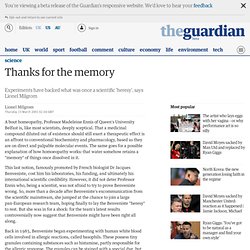 That a medicinal compound diluted out of existence should still exert a therapeutic effect is an affront to conventional biochemistry and pharmacology, based as they are on direct and palpable molecular events. Luc Montagnier, Nobel Prize Winner, Takes Homeopathy Seriously. Dr. 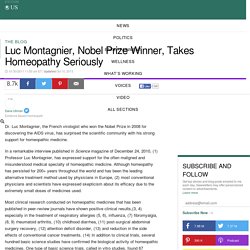 Luc Montagnier, the French virologist who won the Nobel Prize in 2008 for discovering the AIDS virus, has surprised the scientific community with his strong support for homeopathic medicine. In a remarkable interview published in Science magazine of December 24, 2010, (1) Professor Luc Montagnier, has expressed support for the often maligned and misunderstood medical specialty of homeopathic medicine. Although homeopathy has persisted for 200+ years throughout the world and has been the leading alternative treatment method used by physicians in Europe, (2) most conventional physicians and scientists have expressed skepticism about its efficacy due to the extremely small doses of medicines used.