ANN 17 03 02. Eight-year-old girl gets personalized drug for rare disease after parents raise millions. TORONTO - Created to treat a disease within just one person, and named after the little girl it was developed for, a drug thought to be the very first custom medication is here -- and it’s bringing up questions for scientists about the ethics and efficacy of personalized medicine. 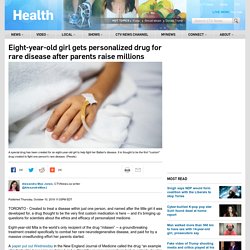 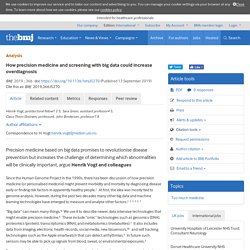 Vogt henrik.vogt@medisin.uio.no Precision medicine based on big data promises to revolutionise disease prevention but increases the challenge of determining which abnormalities will be clinically important, argue Henrik Vogt and colleagues Since the Human Genome Project in the 1990s, there has been discussion of how precision medicine (or personalised medicine) might prevent morbidity and mortality by diagnosing disease early or finding risk factors in apparently healthy people.1 At first, the idea was mostly tied to genome analysis. However, during the past two decades many other big data and machine learning technologies have emerged to measure and analyse other factors.234567 Current screening typically involves measuring one variable or a few variables, either once or at long intervals.

Direct-to-consumer raw genetic data and third-party interpretation services: more burden than bargain? Are We Being Misled About Precision Medicine? Facing incurable breast cancer at age 55, MaryAnne DiCanto put her faith in “precision medicine” — in which doctors try to match patients with drugs that target the genetic mutations in their tumors. 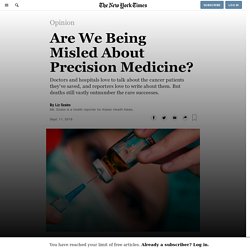 She underwent repeated biopsies to identify therapies that might help. In the Era of Precision Medicine and Big Data, Who Is Normal? BC-Medical Journal. “Hey Doc, what are you going to do to help me? 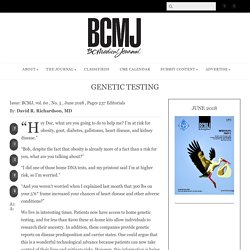 I’m at risk for obesity, gout, diabetes, gallstones, heart disease, and kidney disease.” In the Era of Precision Medicine and Big Data, Who Is Normal? Genomics has entered its adolescent phase: messy and unpredictable. Scientific discoveries have a life cycle. 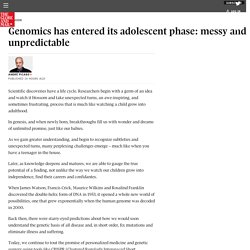 Researchers begin with a germ of an idea and watch it blossom and take unexpected turns, an awe-inspiring, and sometimes frustrating, process that is much like watching a child grow into adulthood. Precision medicine runs risk of overdiagnosis. One of the biggest challenges in medicine is how to offer hope without hype. 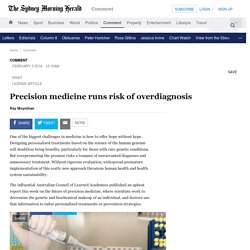 Designing personalised treatments based on the science of the human genome will doubtless bring benefits, particularly for those with rare genetic conditions. But overpromoting the promise risks a tsunami of unwarranted diagnoses and unnecessary treatment. Without rigorous evaluation, widespread premature implementation of this costly new approach threatens human health and health system sustainability. Personal Genetic Testing Is Here. Do We Need It? - The New York Times. DNA test results may not change health habits, research suggests - The Globe and Mail. If you learned your DNA made you more susceptible to getting a disease, wouldn’t you work to stay healthy? 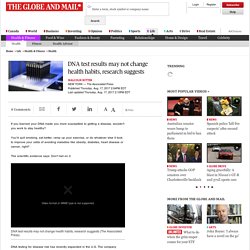 You’d quit smoking, eat better, ramp up your exercise, or do whatever else it took to improve your odds of avoiding maladies like obesity, diabetes, heart disease or cancer, right? The scientific evidence says: Don’t bet on it. DNA test results may not change health habits, research suggests (The Associated Press) DNA testing for disease risk has recently expanded in the U.S.

The company 23andMe recently started selling the nation’s first approved direct-to-consumer DNA tests that evaluate the buyer’s genetic risk for certain disease or conditions. The field also gained a new entrant in July, when a company called Helix launched an online marketplace for DNA tests, including some for genetic health risk. DNA tests for diseases typically assess genetic predisposition to getting sick. Theranos phenomenon: promises and fallacies. There Is Nothing Personal. Genetic test costs US $500 million a year, with little benefit. We hear a lot about the wonders of genetic testing, how it can revolutionize medicine and find cures for fatal diseases. 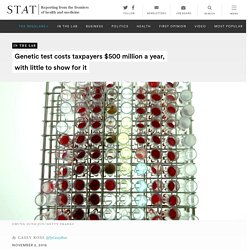 A new study from the University of Michigan also shows how it can waste a half a billion dollars a year. Researchers at the university examined testing for inherited thrombophilia, a genetic quirk that can indicate a patient’s likelihood of developing dangerous blood clots. article continues after advertisement It sounds like a useful test to have. But, according to the researchers, knowing that you have the trait will not change your treatment. Limits to Personalized Cancer Medicine. Precision Medicine and Population Health: Dealing With the Elephant in the Room.

In this week’s Journal of American Medical Association, we published a point-counterpoint commentary on the impact of precision medicine on population health. 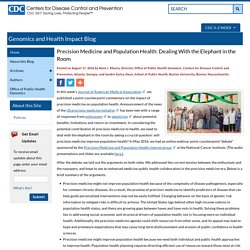 Announcement of the news of the US precision medicine initiative has been met with a range of responses from enthusiasm to skepticism about potential benefits, limitations and return on investment. In considering the potential contribution of precision medicine to health, we need to deal with the elephant in the room by asking a crucial question: will precision medicine improve population health? In May 2016, we had an online webinar point-counterpoint “debate” sponsored by the Precision Medicine and Population Health interest group at the National Cancer Institute. (The audio presentations and slides are available here.) Personalised medicine has obvious benefits but has anyone thought about the issues? 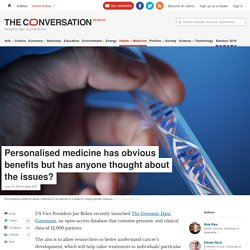 The aim is to allow researchers to better understand cancer’s development, which will help tailor treatments to individuals' particular cancers. This kind of approach is called personalised medicine and is said to be the next frontier in health care. A recent study in the journal Nature, for instance, reported groundbreaking research on the genetic causes of breast cancer. The study’s lead author described it as “a step closer to personalised health care for cancer".

In a study of 36 women – 16 diagnosed with ovarian cancer and a control group of 20 with no cancer diagnosis – nearly all of the women were found to carry cancer-associated gene mutations. The study was an early test of the power of DNA duplex sequencing, a technology developed at the University of Washington. Duplex sequencing independently tags molecules along both strands of DNA. In terms of a prospective diagnostic, its accuracy is thought to be unmatched. This research, marking the technology's first published application in human cancer detection, was posted online today by the Proceedings of the National Academy of Sciences. The impact of communicating genetic risks of disease on risk-reducing health behaviour: systematic review with meta-analysis.

Why whole-genome testing hurts more than it helps. President Obama proposes to plunk down $215 million on "precision medicine," and the National Institutes of Health and its National Cancer Institute will spend it by sequencing the whole genome of a million or more Americans. Is whole-genome testing the path to health? The short answer is no. The main problem with the proposal is that the research is bound to produce more noise than signal. The issue isn't genetics but "big" data. The basic idea of precision medicine is to look for patterns in the genome that seem to travel with problems we all care about: diabetes, heart disease, cancer and dementia.

The side effects of translational omics: overtesting, overdiagnosis, overtreatment : Clinical Chemistry and Laboratory Medicine (CCLM) Is the Pathway Genomics Liquid Biopsy Cancer Test Legit? Catch cancer early for just $699? That is the pitch by Pathway Genomics, a diagnostic company in San Diego that began marketing a blood test to consumers today that it says can detect DNA mutations harbored by unseen cancer cells in your body. The test sounds like great idea.

Finding Risks, Not Answers, in Gene Tests. Photo Jennifer was 39 and perfectly healthy, but her grandmother had died young from breast cancer, so she decided to be tested for mutations in two genes known to increase risk for the disease. When a genetic counselor offered additional tests for 20 other genes linked to various cancers, Jennifer said yes. The more information, the better, she thought. The results, she said, were “surreal.” She did not have mutations in the breast cancer genes, but did have one linked to a high risk of stomach cancer. William Cayley: About what are we being precise? Zip code better predictor of health than genetic code. Direct to consumer genetic testing in Canada: should we be concerned? Public Health in the Precision-Medicine Era — NEJM. Theconversation. Seven Questions for Personalized Medicine. Moonshot Medicine Will Let Us Down.