Ten ways that astronauts are helping you stay healthy. Astronauts on the International Space Station are growing crystals that could help develop new drugs for use on Earth. 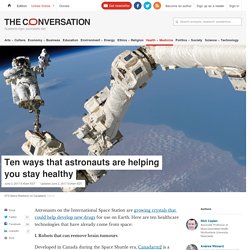 Here are ten healthcare technologies that have already come from space: 1. Robots that can remove brain tumours Developed in Canada during the Space Shuttle era, Canadarm2 is a robotic arm that is attached to the outside of the International Space Station. It is used for many tasks outside the space station to avoid astronauts having to complete high-risk space walks. 2. In space, the lack of gravity changes the way the eyes move and perceive motion. 3.

Nitric oxide is a commonly found pollutant in the air, both on Earth and on the International Space Station. 4. Without gravity acting on their bodies, astronauts experience massive loss in bone density that is similar to the bone loss seen in elderly people with osteoporosis. 5. Infrared technologies were developed many decades ago in NASA’s Jet Propulsion Laboratory to measure the temperature of planets and stars. 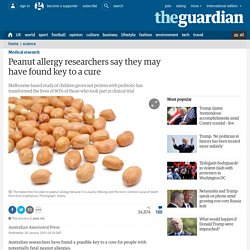 A Melbourne-based study has already transformed the lives of many of the children who took part in the clinical trial. Researchers from the Murdoch Childrens Research Institute gave about 30 allergic children a daily dose of peanut protein together with a probiotic in an increasing amount over an 18-month period. The probiotic used in the study was Lactobacillus rhamnosus and the dose was equivalent to eating about 20kg of yoghurt each day. At the end of the trial 80% of the children could eat peanuts without any reaction. “Many of the children and families believe it has changed their lives, they’re very happy, they feel relieved,” said the lead researcher, Mimi Tang.

NAFTA’s biggest loser: the US, after Canada and Mexico get rich trading marijuana. The president of the United States, Donald Trump, prides himself on his business acumen. 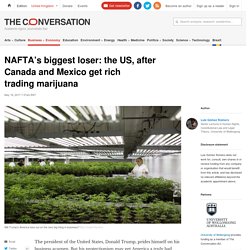 But his protectionism may get America a truly bad deal when it comes to North America’s next big market: marijuana. Fulfilling a campaign promise, on April 13 Canadian Prime Minister Justin Trudeau presented a bill to legalise cannabis for recreational uses (medical marijuana has been legal in the country since 2001). Two weeks later, Mexico’s Congress followed suit, passing a bill to authorise cannabis use for medical and scientific purposes. Two of three North American countries are now well positioned to unlock an industry that, according to Forbes magazine, was worth an estimated US$7.2 billion in 2016 and is projected to grow at a compound annual rate of 17%. Scientists Are Growing Baby Lambs in Plastic Bags. In this insane new video from SciShow, we get a peak into a Matrix-like future where babies are grown in bags. 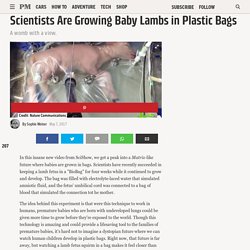 Scientists have recently succeeded in keeping a lamb fetus in a "BioBag" for four weeks while it continued to grow and develop. The bag was filled with electrolyte-laced water that simulated amniotic fluid, and the fetus' umbilical cord was connected to a bag of blood that simulated the connection tot he mother. Advertisement - Continue Reading Below The idea behind this experiment is that were this technique to work in humans, premature babies who are born with undeveloped lungs could be given more time to grow before they're exposed to the world. What elephants teach us about cancer prevention. Primodos: Sky News exposes pregnancy drug cover-up. Sky News reveals how documents were destroyed and information withheld about a drug that may have deformed and killed babies in the womb. 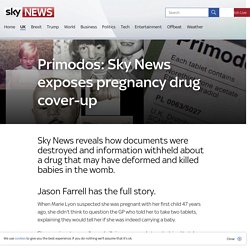 Jason Farrell has the full story. When Marie Lyon suspected she was pregnant with her first child 47 years ago, she didn't think to question the GP who told her to take two tablets, explaining they would tell her if she was indeed carrying a baby. She was given two small round pills in a green packet, and advised to take one. If she didn't have a period, she was to take a second 12 hours later. "The guilt I felt later because I didn't question it was unbearable," says Marie. When her daughter Sarah was born, it was clear from the way the nurses rushed her away immediately that something was wrong.

Hospital Broadcasting Association. When to call an ambulance - First Aid - St John Ambulance. Before you call for an ambulance, you need to assess the casualty. 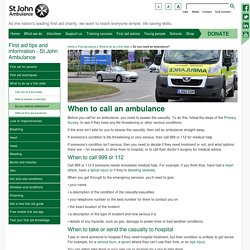 To do this, follow the steps of the Primary Survey, to see if they have any life-threatening or other serious conditions. If the area isn’t safe for you to assess the casualty, then call an ambulance straight away. If someone’s condition is life-threatening or very serious, then call 999 or 112 for medical help. If someone’s condition isn’t serious, then you need to decide if they need treatment or not, and what options there are – for example, to drive them to hospital, or to call their doctor’s surgery for medical advice. Heads Together – Royal Foundation London Marathon 2017 campaign site. Kaspar the social robot. How much of the brain is involved with vision? - Quora. Max Planck Society. Light-responsive proteins are allowing scientists to turn neurons on or off selectively with unprecedented precision. 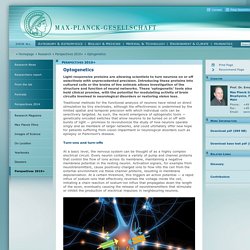 Introducing these proteins into cultured cells or the brains of live animals allows investigation of the structure and function of neural networks. These ‘optogenetic’ tools also hold clinical promise, with the potential for modulating activity of brain circuits involved in neurological disorders or restoring vision loss. Traditional methods for the functional analysis of neurons have relied on direct stimulation by tiny electrodes, although the effectiveness is undermined by the limited spatial and temporal precision with which individual cells can be selectively targeted.

Turn-ons and turn-offs At a basic level, the nervous system can be thought of as a highly complex electrical circuit. Anti-Choking Device. How to Perform the Heimlich Maneuver: 8 Steps. User Reviewed Community Q&A. 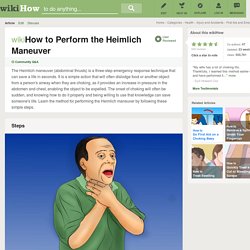 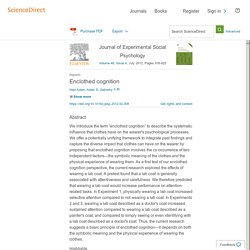 We offer a potentially unifying framework to integrate past findings and capture the diverse impact that clothes can have on the wearer by proposing that enclothed cognition involves the co-occurrence of two independent factors—the symbolic meaning of the clothes and the physical experience of wearing them. As a first test of our enclothed cognition perspective, the current research explored the effects of wearing a lab coat. A pretest found that a lab coat is generally associated with attentiveness and carefulness. We therefore predicted that wearing a lab coat would increase performance on attention-related tasks. Highlights Keywords Embodied cognition; Clothing; Lab coat; Attention. NHS Give Blood.

Share and Care Homeshare. Toward Treating Alzheimer’s Disease with Brain Waves. PICOWER INSTITUTE FOR LEARNING AND MEMORYWhen brain cells fire rhythmically and in sync, they produce waves, which are categorized by their firing frequencies. 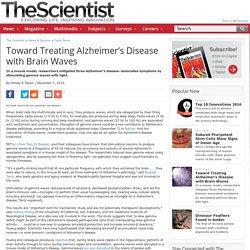 Delta waves (1.5 Hz to 4 Hz), for example, are produced during deep sleep, theta waves (4 Hz to 12 Hz) occur during running and deep meditation, and gamma waves (25 Hz to 100 Hz) are associated with excitement and concentration. Disruption of gamma waves could be a key contributor to Alzheimer’s disease pathology, according to a mouse study published today (December 7) in Nature. And the restoration of these waves, researchers propose, may one day be an option for Alzheimer’s disease treatment. History of Cannabis. History of Cannabis The use of cannabis is believed to stretch back 4,000 years. The compound which gives cannabis its mood-altering properties is known as THC. Cannabis has been used as a medicine for thousands of years all over the world including India, China and the Middle East.

The digital patient: transforming primary care? Re-engineering mosquitos to fight disease. 'Super-parenting' improves children's autism. Giving mums and dads the skills to become "super parents" can dramatically improve their child's autism, a long-term study has shown. In the training, parents watched films of themselves playing with their child while a therapist gave precise tips for helping their child communicate. "What is remarkable is the pay-off," said Louisa Harrison, who has seen a huge improvement in her son Frank. The study focused on children with severe autism, who were often unable to talk to their parents. BMJ - Teaching as therapy: cross sectional and qualitative evaluation of patients' experiences of undergraduate psychiatry teaching in the community. Kate Walters, MRC special training fellow in health services research (k.walters@pcps.ucl.ac.uk)a, Marta Buszewicz, senior lecturer in primary carea, Jill Russell, lecturer in postgraduate educationa, Charlotte Humphrey, professor of healthcare evaluationbAuthor affiliationsCorrespondence to: K WaltersAccepted 14 February 2003 Abstract Objective: To explore the impact of participating in undergraduate teaching in general practice for patients with common mental disorders.

He lost his 35 percent of his hearing and some of his memory that day, but what he gained is remarkable: he is now a musical genius. "As I shut my eyes, I found these black and white structures moving from left to right, which in fact would represent in my mind, a fluid and continuous stream of musical notation," Amato writes in a blog post. Johnson & Johnson Announces Start of Clinical Trial of Ebola Vaccine Regimen in Sierra Leone. First study of Janssen’s prime-boost vaccine regimen in an Ebola outbreak country Study being initiated on parallel track with multiple ongoing Phase I and II studies across U.S., Europe and Africa as part of accelerated development plan for vaccine regimen.

"A ticking time bomb: the infectious threat of antibiotic resistance" by Prof Dame Sally Davies. SAEF Table Tennis Therapy Program. SAEF Table Tennis Therapy Program. BBC One - The Doctor Who Gave Up Drugs. A Mother Without a Child - Journal. This invention by a British student could save millions of lives across the world - BBC Newsbeat. Drug engineered from bananas shows promise in fighting deadly viruses. Great memories. BBC Radio 4 - All in the Mind, Supertaskers, Technology to Replace Exams and the All in the Mind Awards. Afghan poppies 'could help NHS' 7 Alarming Things Your Dreams Tell You About Your Mental Health. There is a whole field of study that is entirely dedicated to understanding and interpreting our dreams.

Laboratory Animal Research Training Programs. From individual staff training in laboratory animal care and husbandry to group training in the operation of complete aquatic research systems, Charles River can tailor a program to suit your specific needs. Our training team is dedicated to providing a learning environment for competency-based training. Understanding Immunotherapy. Immunotherapy, also called biologic therapy, is a type of cancer treatment designed to boost the body's natural defenses to fight the cancer.

It uses substances either made by the body or in a laboratory to improve or restore immune system function. Antibiotic Resistance Action Center. The Antibiotic Resistance Action Center (ARAC) was created to reduce antibiotic resistance worldwide. ARAC, housed in the Milken Institute School of Public Health at the George Washington University, is led by microbiologist Dr. Antibiotic Resistant Superbug Arrives In America. The Synesthesia Battery. Blind as a Bat: Seeing Without Eyesight. How Meditation, Placebos And Virtual Reality Help Power 'Mind Over Body' Zen Hospice Project. Why Is Yawning So Contagious? Ivan Oransky: Are we over-medicalized? Bruce K. Alexander - The Globalisation of Addiction. Johann Hari: Everything you think you know about addiction is wrong.