County Health Rankings & Roadmaps. One Of The World's Top Aging Researchers Has A Pill To Keep You Feeling Young. Symptom Checker, Health Information and Medicines Guide. Meditation is an Effective Treatment for Depression, Anxiety and Pain. Data from 47 different clinical trials finds meditation is as effective as antidepressants. 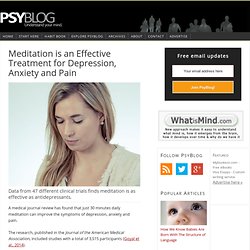 A medical journal review has found that just 30 minutes daily meditation can improve the symptoms of depression, anxiety and pain. The research, published in the Journal of the American Medical Association, included studies with a total of 3,515 participants (Goyal et al., 2014). All of the research involved active control groups so it was possible to discount the placebo effect. 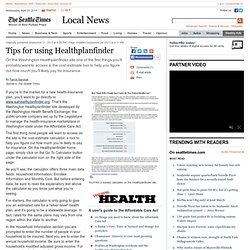 That’s the Washington Healthplanfinder site developed by the Washington Health Benefit Exchange, the public-private company set up by the Legislature to manage the health-insurance marketplace in Washington state under the Affordable Care Act. 8 carriers, many health plans make for lots of choices. The centerpiece of the Affordable Care Act is the establishment of online insurance marketplaces, called exchanges, where the uninsured and those seeking individual insurance plans can find and purchase a plan that suits them. 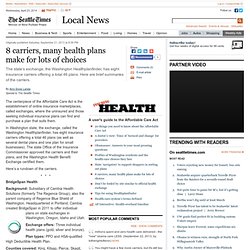 In Washington state, the exchange, called the Washington Healthplanfinder, has eight insurance carriers offering a total 46 plans (as well as several dental plans and one plan for small businesses). The state Office of the Insurance Commissioner approved the carriers and their plans, and the Washington Health Benefit Exchange certified them. A user's guide: 20 things to know about the Affordable Care Act. Hat do you need to know about the Affordable Care Act, aka Obamacare, the health-reform law or the “federal health-care overhaul”? 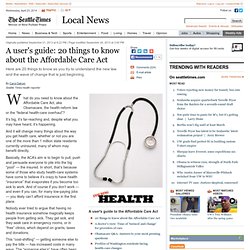 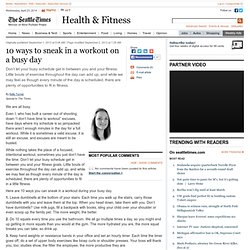 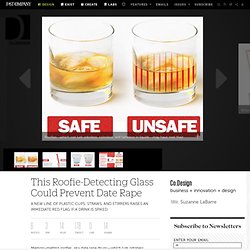 Don't Be Scared If Your Surgeon Is Wearing Google Glass In The Operating Room. For most people, Google Glass still seems like little more than a gimmick. 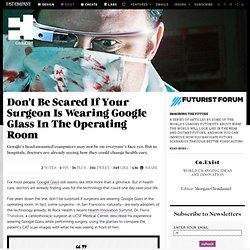 But in health care, doctors are already finding uses for the technology that could one day save your life. Five years down the line, don't be surprised if surgeons are wearing Google Glass in the operating room. In fact, some surgeons--in San Francisco, naturally--are early adopters of the technology already. At Rock Health's recent Health Innovation Summit, Dr.

10 Simple, Science-Backed Ways To Be Happier Today. Editor's Note: This is one of the most-read leadership articles of 2013. 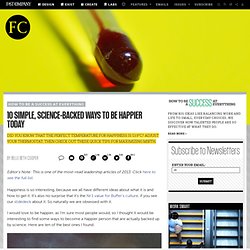 Click here to see the full list. Happiness is so interesting, because we all have different ideas about what it is and how to get it. It’s also no surprise that it’s the Nr.1 value for Buffer’s culture, if you see our slidedeck about it. So naturally we are obsessed with it. I would love to be happier, as I’m sure most people would, so I thought it would be interesting to find some ways to become a happier person that are actually backed up by science. 1.Exercise more--7 minutes might be enough. Marty Kaplan: Being American Is Bad for Your Health. "Americans are sicker and die younger than people in other wealthy nations. 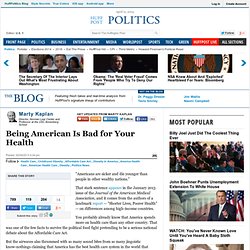 " That stark sentence appears in the January 2013 issue of the Journal of the American Medical Association, and it comes from the authors of a landmark report -- "Shorter Lives, Poorer Health" -- on differences among high-income countries. You probably already know that America spends more on health care than any other country. That was one of the few facts to survive the political food fight pretending to be a serious national debate about the Affordable Care Act. Brains of &ldquo;Super Agers&rdquo; Look Decades Younger. As people age, their brain tends to shrink and their memory gets worse. 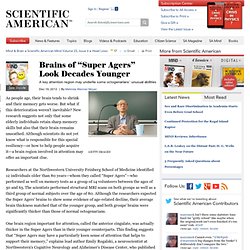 But what if this deterioration weren't inevitable? New research suggests not only that some elderly individuals retain sharp memory skills but also that their brain remains unscathed. Although scientists do not yet know what is responsible for this special resiliency—or how to help people acquire it—a brain region involved in attention may offer an important clue. Researchers at the Northwestern University Feinberg School of Medicine identified 12 individuals older than 80 years—whom they called “Super Agers”—who performed as well on memory tests as a group of 14 volunteers between the ages of 50 and 65.

The scientists performed structural MRI scans on both groups as well as a third group of normal subjects over the age of 80. National Healthy Worksite Program (NHWP) - Home.