Neanderthals were no strangers to good parenting. Archaeologists at the University of York are challenging the traditional view that Neanderthal childhood was difficult, short and dangerous. 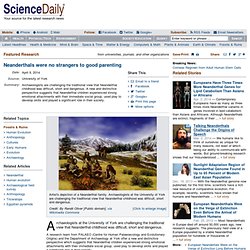 A research team from PALAEO (Centre for Human Palaeoecology and Evolutionary Origins) and the Department of Archaeology at York offer a new and distinctive perspective which suggests that Neanderthal children experienced strong emotional attachments with their immediate social group, used play to develop skills and played a significant role in their society. The research team, which also included Gail Hitchens, Andy Needham and Holly Rutherford, say there is evidence that Neanderthals cared for their sick and injured children for months and often years.

Handaxe design reveals distinct Neanderthal cultures. A study by a postgraduate researcher at the University of Southampton has found that Neanderthals were more culturally complex than previously acknowledged. 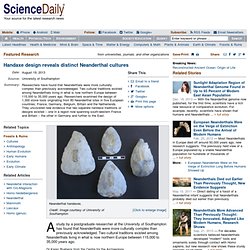 Two cultural traditions existed among Neanderthals living in what is now northern Europe between 115,000 to 35,000 years ago. Dr Karen Ruebens from the Centre for the Archaeology of Human Origins (CAHO) and funded by the Arts and Humanities Research Council (AHRC) examined the design of 1,300 stone tools originating from 80 Neanderthal sites in five European countries; France, Germany, Belgium, Britain and the Netherlands. Dr Ruebens' investigations uncovered new evidence that two separate handaxe traditions or designs existed -- one in a region now spanning south-western France and Britain -- the other in Germany and further to the East. In addition, she found an area covering modern day Belgium and the Netherlands that demonstrates a transition between the two. 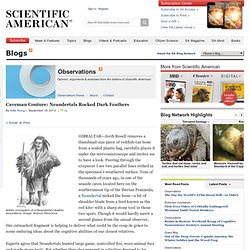 Image: Antonio Monclova GIBRALTAR—Jordi Rosell removes a thumbnail-size piece of reddish-tan bone from a sealed plastic bag, carefully places it under the stereomicroscope and invites me to have a look. Peering through the eyepieces I see two parallel lines etched in the specimen’s weathered surface. Tens of thousands of years ago, in one of the seaside caves located here on the southernmost tip of the Iberian Peninsula, a Neandertal nicked the bone—a bit of shoulder blade from a bird known as the red kite–with a sharp stone tool in those two spots. Though it would hardly merit a second glance from the casual observer, this cutmarked fragment is helping to deliver what could be the coup de grâce to some enduring ideas about the cognitive abilities of our closest relatives.

Experts agree that Neandertals hunted large game, controlled fire, wore animal furs and made stone tools. Neanderthals Cooked Their Veggies: Dental Plaque Reveals Eating Habits. According to a recent article at Nature.com, Neanderthals, a branch of early humans that went extinct, may not have been the carnivores scientists once thought. 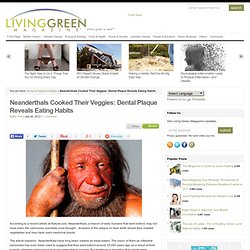 Analysis of the plaque on their teeth shows they roasted vegetables and may have used medicinal plants. The article explains: Neanderthals have long been viewed as meat-eaters. The vision of them as inflexible carnivores has even been used to suggest that they went extinct around 25,000 years ago as a result of food scarcity, whereas omnivorous humans were able to survive. But evidence is mounting that plants were important to Neanderthal diets — and now a study reveals that those plants were roasted, and may have been used medicinally.” The teeth on skeletal remains of at least 13 Neanderthals (Homo neanderthalensis) found in a cave in northern Spain were analyzed to look for organic compounds that could reveal clues to their diet. Hardy believes that Neanderthals may have used the bitter plants as.

Read the full article at. Oldest Cave Paintings May Be Creations of Neandertals, Not Modern Humans. Hand stencils in El Castillo cave are older than previously thought. 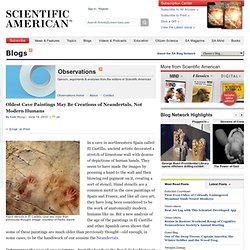 Image: courtesy of Pedro Saura In a cave in northwestern Spain called El Castillo, ancient artists decorated a stretch of limestone wall with dozens of depictions of human hands. They seem to have made the images by pressing a hand to the wall and then blowing red pigment on it, creating a sort of stencil. Chatty Cave Men? Me Neanderthal, Talk Good. Neanderthals might have spoken just like humans do now, new genetic findings suggest. 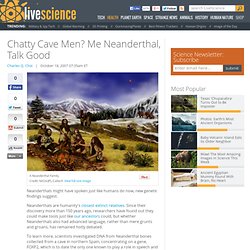 Neanderthals are humanity's closest extinct relatives. Since their discovery more than 150 years ago, researchers have found out they could make tools just like our ancestors could, but whether Neanderthals also had advanced language, rather than mere grunts and groans, has remained hotly debated. Neanderthals Talked. Neanderthals, like modern humans, likely communicated among themselves and with others using tonal languages. 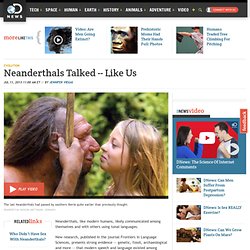 Infant tooth reveals Neanderthal breastfeeding habits. Neanderthals used toothpicks to alleviate the pain of diseases related to teeth, such as inflammation of the gums. Removing food scraps trapped between the teeth one of the most common functions of using toothpicks, thus contributing to our oral hygiene. 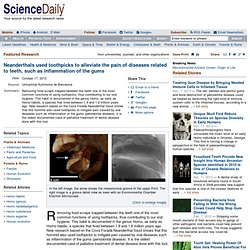 This habit is documented in the genus Homo, as early as Homo habilis, a species that lived between 1.9 and 1.6 million years ago. New research based on the Cova Foradà Neanderthal fossil shows that this hominid also used toothpicks to mitigate pain caused by oral diseases such as inflammation of the gums (periodontal disease). It is the oldest documented case of palliative treatment of dental disease done with this tool. This research is based on toothpicking marks on the Neanderthal teeth related to periodontal disease. The chronology of the fossil is not clear, but the fossil remains were associated with a Neanderthal Mousterian lithic industry (about 150,000 to 50,000 years).