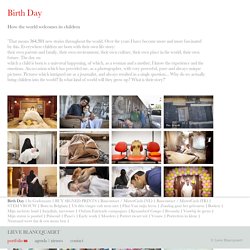 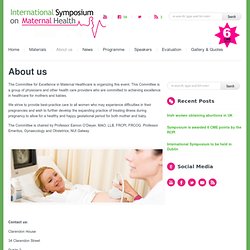 This Committee is a group of physicians and other health care providers who are committed to achieving excellence in healthcare for mothers and babies. We strive to provide best-practice care to all women who may experience difficulties in their pregnancies and wish to further develop the expanding practice of treating illness during pregnancy to allow for a healthy and happy gestational period for both mother and baby. The Committee is chaired by Professor Eamon O’Dwyer, MAO, LLB, FRCPI, FRCOG. Professor Emeritus, Gynaecology and Obstetrics, NUI Galway Contact us: Clarendon House. Prof. Frederic Amant, MD: Chemotherapy & Pregnancy. Methods of linking mothers and infants using health plan data for studies of pregnancy outcomes. 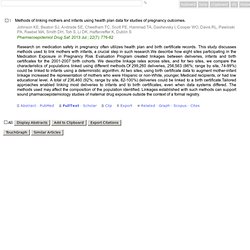 This study discusses methods used to link mothers with infants, a crucial step in such research.We describe how eight sites participating in the Medication Exposure in Pregnancy Risk Evaluation Program created linkages between deliveries, infants and birth certificates for the 2001-2007 birth cohorts. We describe linkage rates across sites, and for two sites, we compare the characteristics of populations linked using different methods.Of 299,260 deliveries, 256,563 (86%; range by site, 74-99%) could be linked to infants using a deterministic algorithm.

At two sites, using birth certificate data to augment mother-infant linkage increased the representation of mothers who were Hispanic or non-White, younger, Medicaid recipients, or had low educational level. 90 seconds to change the world: Alan Greene at TEDxBrussels. BBC Breakfast delayed cord clamping very interesting... - July 2013 Birth Club. Cutting cord too early puts babies at risk, NHS warned. Childbirth experts are urging the NHS to reverse the policy it has pursued since the 1960s of clamping and cutting a baby's umbilical cord as soon as it is born, citing mounting evidence that this may leave newborn babies deprived of vital blood from the placenta. 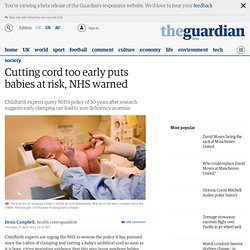 Medical bodies, senior doctors and the National Childbirth Trust (NCT) want maternity staff to stop routinely clamping the cord within seconds of the baby's arrival and instead leave it untouched for anything from 30 seconds to whenever it stops pulsating naturally, usually within two to five minutes. They believe that infants may be at risk of becoming anaemic by being denied the chance to receive as much as a third of their blood volume from the placenta through the cord. Anaemia can later be associated with brain development and can affect cognitive ability. Mother sings praises of delayed clamping of umbilical cord. Denise Roche vividly recalls the worrying colour her son Callum was when he was born in 2006 after a 43-hour labour. 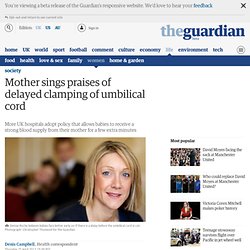 "He was fully alert but looked pretty blue and it was a good while before his hands and feet began looking pinky and normal," she says. Happily, when her daughter, Millie, arrived in 2008, "she looked a lot better when she came out – very, very pink", the way parents want their newborns to be.

When Callum underwent Apgar tests, which assesses physical and mental function one and five minutes after birth, he scored just five out of 10. Millie, though, scored nine both times. Relevant initiatives. Today, we are a group of motivated individuals and organizations who have the ambition to break down pregnancy taboos and build an infrastructure where experts, medical professionals, academics, companies, NGOs, and patients can come together to share their knowledge and experiences, effectively bringing this issue to the forefront of healthcare priorities. 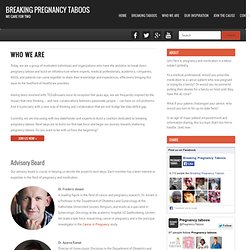 Having been involved with TEDxBrussels since its inception five years ago, we are frequently inspired by the impact that new thinking – and new collaborations between passionate people – can have on old problems. And it is precisely with a new way of thinking and collaboration that we will bridge the data deficit gap. Currently, we are discussing with key stakeholder and experts to build a coalition dedicated to breaking pregnancy taboos.

Next steps are to build our first task force and begin our journey towards shattering pregnancy taboos. Do you want to be with us from the beginning? Dr. Dr. Dr. Dr. Merck for Mothers. The Hospital for Sick Children - Motherisk. Merck for Mothers. Bayer. Which Medications Are Safe During Pregnancy? Women's Health Topics > Pregnancy. SWHR Homepage - Society for Women's Health Research. SWHR Announces New Campaign on Molecular Diagnostics SWHR is proud to announce a public awareness campaign focused on “Transforming Science: Innovations in Molecular Diagnostics.” 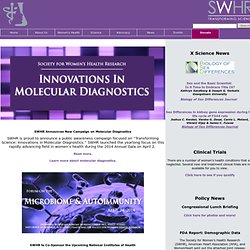 SWHR launched the yearlong focus on this rapidly advancing field in women’s health during the 2014 Annual Gala on April 2. Read more. Learn more about molecular diagnostics. SWHR to Co-Sponsor the Upcoming National Institutes of Health Forum on Microbiome and Autoimmunity SWHR is co-sponsoring the National Institutes of Health (NIH) Forum on the Microbiome and Autoimmunity on Thursday, April 24, at the NIH in Bethesda, Md. Learn more. Society for Women’s Health Research Highlights Women’s Sleep Health at Annual Meeting of the Organization for the Study of Sex Differences SWHR will present a poster on “Exploring Sex and Gender Differences in Sleep” at the 2014 Annual Meeting of the Organization for the Study of Sex Differences (OSSD) on April 24-26 in Minneapolis, Minn. Read more. SWHR is proud that Dr. Read more here. Medicine in Social Media. LOGIN • SIGN UP You are here: Home Best Public Health Blogs Sexual Health Twitter Channels. 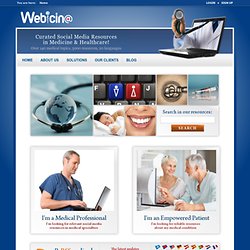