Empr. In January 2015, President Obama launched the Precision Medicine Initiative, a plan to support research into treatment and prevention strategies that take differences between people – especially genetics – into account. 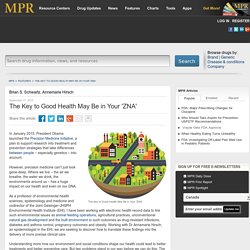 However, precision medicine can't just look gene-deep. Where we live – the air we breathe, the water we drink, the environments around us – has a huge impact on our health and even on our DNA. As a professor of environmental health sciences, epidemiology and medicine and codirector of the Joint Geisinger-JHSPH Environmental Health Institute (EHI), I have been working with electronic health record data to link such environmental issues as animal feeding operations, agricultural practices, unconventional natural gas development and the built environment to such outcomes as drug-resistant infections, diabetes and asthma control, pregnancy outcomes and obesity. 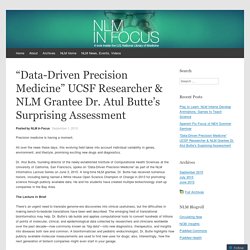 All over the news these days, this evolving field takes into account individual variability in genes, environment, and lifestyle, promising exciting new drugs and diagnostics. Dr. Atul Butte, founding director of the newly-established Institute of Computational Health Sciences at the University of California, San Francisco, spoke on “Data-Driven Precision Medicine” as part of the NLM Informatics Lecture Series on June 3, 2015. A long-time NLM grantee, Dr. Butte has received numerous honors, including being named a White House Open Science Champion of Change in 2013 for promoting science through publicly available data.

The Lecture in Brief There’s an urgent need to translate genome-era discoveries into clinical usefulness, but the difficulties in making bench-to-bedside translations have been well described. Nine Butte Bytes Dr. The world is experiencing a data deluge. By Melanie Modlin, NLM in Focus writer. 10. That clinical medicine has contributed enormously to our ability to treat and cure sick people is beyond contention. 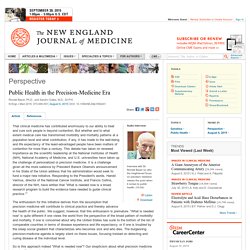 But whether and to what extent medical care has transformed morbidity and mortality patterns at a population level and what contribution, if any, it has made to the well-being and life expectancy of the least-advantaged people have been matters of contention for more than a century. This debate has taken on renewed importance as the scientific leadership at the National Institutes of Health (NIH), National Academy of Medicine, and U.S. universities have taken up the challenge of personalized or precision medicine. It is a challenge given all the more salience by President Barack Obama's announcement in his State of the Union address that his administration would seek to fund a major new initiative. NEJM Perspective: Focus on Precision Medicine Distracting From Efforts Seeking Healthier Population. UCSF's one-size-fits-all precision medicine test for infectionMedCity News.

Is it a superbug? 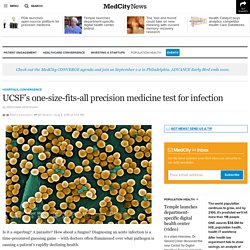 A parasite? How about a fungus? Diagnosing an acute infection is a time-pressured guessing game – with doctors often flummoxed over what pathogen is causing a patient’s rapidly declining health. The University of California health system, led by UC San Francisco, is using a precision medicine approach to quickly detect infectious disease among patients in its health system. It is using next-gen sequencing and a proprietary algorithm to figure out what virus, bacteria, fungus or parasite is causing a patient’s illness. The health system is working with four Silicon Valley companies: Quest Diagnostics, Google Genomics, DNANexus and Syapse. FDA’s approval of first 3-D-printed pill opens up endless possibilities for personalized medicine. This product image provided by Aprecia Pharmaceuticals shows Spritam 750 mg, foreground, and 1,000 mg tablets. 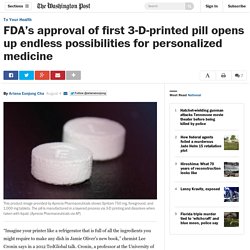 The pill is manufactured in a layered process via 3-D printing and dissolves when taken with liquid. (Aprecia Pharmaceuticals via AP) “Imagine your printer like a refrigerator that is full of all the ingredients you might require to make any dish in Jamie Oliver's new book,” chemist Lee Cronin says in a 2012 TedGlobal talk. Cronin, a professor at the University of Glasgow, goes on to describe how this idea could be applied to drugs, such as ibuprofen, by enabling a 3-D printer to follow a recipe given by a pharmaceutical company and produce whatever is needed, on the fly from a set of chemical inks.

Think of it as a "Star Trek" replicator for pills. In pursuit of precision medicine for PTSD. Brain scans of war veterans with posttraumatic stress disorder have led researchers to an area of the prefrontal cortex that appears to be a good predictor of response to treatment with SSRIs--the first-line drug treatment for PTSD. 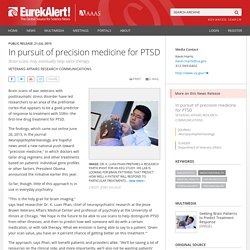 The findings, which came out online June 26, 2015, in the journal Neuropsychopharmacology, are hopeful news amid a new national push toward "precision medicine," in which doctors will tailor drug regimens and other treatments based on patients' individual gene profiles or other factors. President Obama announced the initiative earlier this year. So far, though, little of this approach is in use in everyday psychiatry. "This is the holy grail for brain imaging," says lead researcher Dr.

Welcome to Forbes. AstraZeneca digs into precision medicine with lung, heart deals. Personalized medicine: Time for one-person trials. Illustration by Greg Clarke Every day, millions of people are taking medications that will not help them. 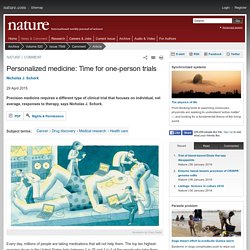 The top ten highest-grossing drugs in the United States help between 1 in 25 and 1 in 4 of the people who take them (see 'Imprecision medicine'). For some drugs, such as statins — routinely used to lower cholesterol — as few as 1 in 50 may benefit1. There are even drugs that are harmful to certain ethnic groups because of the bias towards white Western participants in classical clinical trials2. Medscape Log In. Revisiting The Central Dogma Of Precision Medicine. California unveils 'precision-medicine' project. The state of California is launching a US$3-million precision-medicine project. 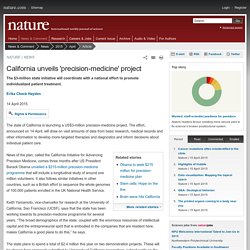 The effort, announced on 14 April, will draw on vast amounts of data from basic research, medical records and other information to develop more-targeted therapies and diagnostics and inform decisions about individual patient care. News of the plan, called the California Initiative for Advancing Precision Medicine, comes three months after US President Barack Obama unveiled a $215-million precision-medicine programme that will include a longitudinal study of around one million volunteers. 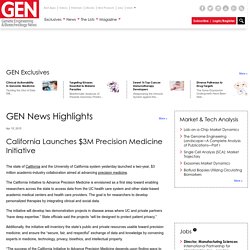 The California Initiative to Advance Precision Medicine is envisioned as a first step toward enabling researchers across the state to access data from the UC health care system and other state-based academic medical centers and health care providers. The goal is for researchers to develop personalized therapies by integrating clinical and social data. It Takes Two To Tango: Combine Diagnostics And Drugs For Precision Medicine. Precision Medicine: The Future or Simply Politics?

Day 10: What will precision medicine look like 10 years from now? Precision Medicine: The Future or Simply Politics? What is “Precision Medicine” — and can it work? The State of the Union address is an opportunity for the US President to put forth grand visions and set forth challenges concerning where the country should direct its efforts and resources. 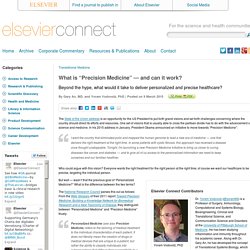 One set of visions that is usually able to cross the partisan divide has to do with the advancement of science and medicine. In his 2015 address in January, President Obama announced an initiative to move towards “Precision Medicine”: FDA Outlines Plan for Expected $10M Under President's Precision Medicine Plan. Living Longer, Dying Differently. The average human lifespan has nearly doubled over the past two centuries.

How does that affect how people feel about death? If the prevalence and commonality of death has had any positive side effect on Louisiana—which has one of the lowest life expectancies in the U.S. —it’s that residents have attuned themselves to its context. “Early on, I got some sense of history and how ages compare, and how one of the responsibilities we face in this age is to be conscious of what’s unique to it,” says author Anne Rice, one of New Orleans’s most famous daughters. “If you’re aware that in 1850 people starved to death in the middle of New Orleans or New York, that’s a dramatic difference between past and future.” Rice’s classic novels—Interview with the Vampire, The Vampire Lestat, Queen of the Damned, and many more—predate the current vampire craze.

“The failure of most vampire literature is that the authors can’t successfully imagine what it’s like to be 300 years old. Would You Rather Die Sooner Than Take a Daily Pill? In a recent study, one-third of the participants said they'd shave time off their lives to avoid taking medication each day. There are diagnoses for some people who can’t or won’t take pills. There’s dysphagia, or difficulty swallowing. There’s emetophobia, the fear of gagging or vomiting. There’s pharmacophobia, the fear of taking any medicine at all. And then there are people who have none of these conditions, but really, really hate to do it anyway.

New tools can help doctors assess a patient's genes, environment, and lifestyle, improving the chances for better treatment and also helping the overall fight against diseases like cancer and diabetes, said Obama and aides. At a White House event featuring doctors and researchers, Obama defined the promise precision medicine as "delivering the right treatments at the right time — every time — to the right person. " Big Precision Medicine Plan Raises Patient Privacy Concerns.

Precision medicine is also known as personalized medicine; it is an approach to medical care that allows doctors to provide customized, “bespoke” medical treatments. How will precision medicine handle privacy concerns moving forward? The U.S. Food and Drug Administration switched perspectives concerning patient-centric medicine on Feb. 19 when it approved the marketing of genetics testing company 23andMe’s carrier test for Bloom Syndrome – bringing it back to life after previous ethical/technical issues. Generally speaking, this was great news and demonstrates the FDA’s willingness to adapt, but there are still concerns with data regulation as we move forward in a pro-innovation healthcare culture that is growing exponentially. Kristin Newby: Precision medicine’s promise. Healthy in a Falling Apart Sort of Way. Big Med. Dr. Google is no substitute for the real thing: Most self-diagnosers still see a physician.

The Problem with Precision Medicine. Last Friday, in a speech at the White House, President Obama unveiled what he called his Precision Medicine Initiative, a two-hundred-and-fifteen-million-dollar plan to collect genetic information from a million American volunteers in order to further the development of personalized, genetics-based medical treatments. Obama called precision medicine “one of the greatest opportunities for new medical breakthroughs that we have ever seen,” saying that it promised to deliver “the right treatments at the right time, every time, to the right person.” So far, however, the excitement surrounding personalized medicine has outpaced the science.

DNA testing has become increasingly useful in the detection and treatment of various conditions, including cancer, intellectual developmental delays, birth defects, and diseases of unknown origin, and the cost of genetic analyses has dropped even as the speed with which their results are delivered has risen. A Path for Precision Medicine. Personalized Medicine May Be Good For Patients But Bad For Drug Companies' Bottom Line. Precision medicine to prevent diabetes? Researchers develop personalized way to steer prevention efforts. Welcome to Forbes. Untitled. The promise of precision medicine: Care for the whole person.