Pets and veterinary. The Weston A. Price Foundation - Weston A Price Foundation. Fevers in Children. Natural Remedies and supplements. This “Golden Honey” Mixture is The Strongest Known Natural Antibiotic. You must prepare this Golden honey mixture because it is the strongest known antibiotic Many of you have already had some experience with turmeric. 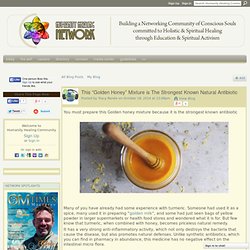 Someone had used it as a spice, many used it in preparing “golden milk“, and some had just seen bags of yellow powder in larger supermarkets or health food stores and wondered what it is for. But few know that turmeric, when combined with honey, becomes priceless natural remedy. It has a very strong anti-inflammatory activity, which not only destroys the bacteria that cause the disease, but also promotes natural defenses. Unlike synthetic antibiotics, which you can find in pharmacy in abundance, this medicine has no negative effect on the intestinal micro flora. Turmeric contains curcumin, polyphenol identified as essential active ingredient, which reaches over 150 potential therapeutic activity, including antioxidant, anti-inflammatory and anti-cancer properties. 3.5 oz / 100 grams of raw honey 1 tablespoon of turmeric.

Herbalism. Coconut Oil Treatment, Four Teaspoons a Day Can Reverse Alzheimer's Disease. Coconut oil treatments have been shown to be a powerful remedy for Alzheimer’s — and dozens of other life-threatening diseases. 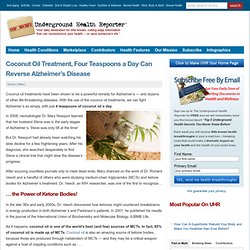 With the use of the coconut oil treatments, we can fight Alzheimer’s so simply, with just 4 teaspoons of coconut oil a day. In 2008, neonatologist Dr. Coconut Oil Reverses the Effects of Alzheimer’s in 50 Year Old Woman. Catherine: “Coconut Oil has become my best friend” – Photo provided by her family by Raul Lora-Zamorano [Health Impact News] Catherine and I were married on May 1st, 1988. 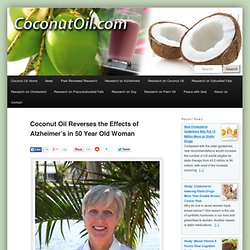 Prior to our marriage, Catherine was a senior manager in the administrative area of a major retail chain with some 800 stores. Why coconut oil is good for you. Forget scented candles – there's nothing quite like the aroma of gently warming coconut oil to transport your mind to a Mutiny on the Bounty island with lapping waves, golden sand and swaying palms. 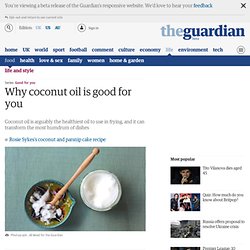 Don't buy the odourless, flavourless "pure" type that has been industrially refined. Go for the raw, cold-pressed, virgin sort. Its fragrance and tropical opulence can elevate even a humdrum weekday dal into something special. Coconut oil lends a convincing authenticity to a whole host of Asian dishes, from beef rendang to Thai green curry, but its use needn't be restricted to oriental recipes. 'He's going to be better than he was before' Grant Virgin suffered a traumatic brain injury after being struck by a hit-and-run driverHis parents decided to give fish oil a tryThe teen surprised his mother by calling her in the middle of the nightHis mother calls his recovery "unbelievable" For more on Grant Virgin's incredible story, tune in to "Sanjay Gupta, MD" at 4:30 p.m. 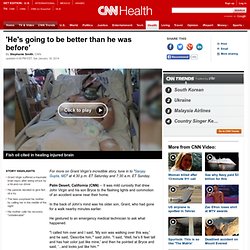 ET Saturday and 7:30 a.m. ET Sunday. Palm Desert, California (CNN) -- It was mild curiosity that drew John Virgin and his son Bryce to the flashing lights and commotion of an accident scene near their home. In the back of John's mind was his older son, Grant, who had gone for a walk nearby minutes earlier. He gestured to an emergency medical technician to ask what happened. Do you take fish oil? Health Benefits of Perilla Frutescens. Perrilla frutescens, commonly referred to as perilla, is a food and traditional medicine in Asian countries, particularly Japan and China. 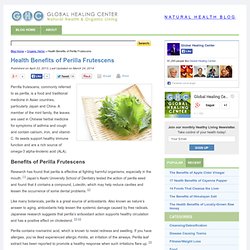 A member of the mint family, the leaves are used in Chinese herbal medicine for symptoms of asthma and cough and contain calcium, iron, and vitamin C. Its seeds support healthy immune function and are a rich source of omega-3 alpha-linolenic acid (ALA). Benefits of Perilla Frutescens. How to Make Fermented Rice. Ingredients: 2 cups Glutinous Rice (sticky)* 2 tsp.

Tape Starter (Ragi Yeast) 1/2 cup Sugar Instructions: Soak the rice in one gallon of water overnight. Steam the soaked rice for 45 minutes and then allow to cool until it's body temperature. Tapai pulut is a favourite dessert at many homes during Hari Raya. 30 July 2013| last updated at 01:07AM However, the sweet-tasting traditional dessert is unfor tunately disappearing from such occassions in many parts of the country. 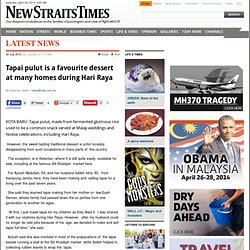 The exception, is in Kelantan, where it is still quite easily available for sale, including at the famous Siti Khadijah market here. For Azizah Abdullah, 54, and her husband Salleh Idris, 60, from Kampung Jambu here, they have been making and selling tapai for a living over the past seven years. Fermented tapioca (tapai ubi) in cancer treatment - makna - ammado. Tapioca tapai. Tapai Ubikayu (Fermented Tapioca) Dom's Culture-Food of Asia in-site. Vinegar Kills Tuberculosis And Other Mycobacteria. The active ingredient in vinegar, acetic acid, can effectively kill mycobacteria, even highly drug-resistant Mycobacterium tuberculosis, an international team of researchers from Venezuela, France, and the US reports in mBio®, the online open-access journal of the American Society for Microbiology. 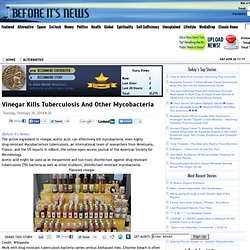 Other effective commercial disinfectants can be too expensive for TB labs in the resource-poor countries where the majority of TB occurs. “Many cosmetic procedures are performed outside of hospital settings in developing countries, where effective disinfectants are not available.” 'WEED' Documentary Dr Sanjay Gupta HD. Vitamin C Anti-Viral. 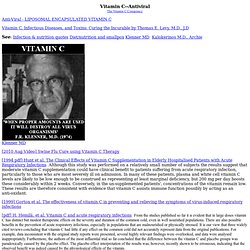 The effectiveness of vitamin C in preventing and relieving the symptoms of virus-induced respiratory infections [pdf] H. Hemilä, et al. Vitamin C and acute respiratory infections From the studies published so far it is evident that in large doses vitamin C has distinct but modest therapeutic effects on the severity and duration of the common cold, even in well nourished populations. 50 Uses for Hydrogen Peroxide. Gardening. HERBS - STEVIA REBAUDIANA - 50 SEEDS: Amazon.co.uk: Garden & Outdoors. Roll over image to zoom in Sow finely in a heated propagator or pot covered with a piece of glass placed in a warm draft free location. Fine well draining seed compost is required and the surface should be kept moist, not overwatered. Do not cover seeds as they require light and humidity to germinate. When seedlings appear remove from the propagator or remove the glass from the pot and ensure good ventilation to encourage strong growth. Prick out to larger pots / trays when large enough to handle and grow on under-cover in a warm environment.