Too much medicine. #overtreating 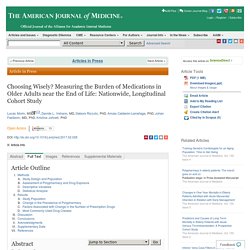 The feasibility and effect of deprescribing in older adults on mortality and health: a systematic review and meta-analysis. New Drugs Are Often Bad For Patients, Great For Pharma. The business model that generates huge profits for the drug industry depends on planned obsolescence. 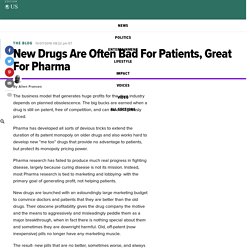 The big bucks are earned when a drug is still on patent, free of competition, and can be outrageously priced. Pharma has developed all sorts of devious tricks to extend the duration of its patent monopoly on older drugs and also works hard to develop new “me too” drugs that provide no advantage to patients, but protect its monopoly pricing power. Pharma research has failed to produce much real progress in fighting disease, largely because curing disease is not its mission. Instead, most Pharma research is tied to marketing and lobbying- with the primary goal of generating profit, not helping patients. 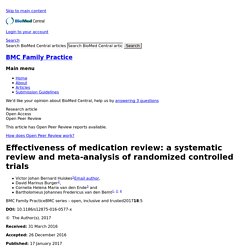 Furthermore this systematic review provides an overview of all outcome measures and selection criteria without exclusion criteria based on patient characteristics. In this study, a beneficial effect of medication review was found on most drug-related outcome measures. However, minimal effect was observed on clinical outcomes, no effect was found on quality of life and evidence was inconclusive concerning the effect on economical outcome measures. Only seventeen trials (55%) were designated low risk of bias. Medical errors, old habits, bad practice. How many things served us yesterday for articles of faith, which today are fables for us? 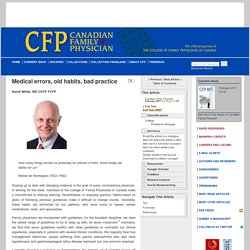 Michel de Montaigne (1533–1592) Staying up to date with changing evidence is the goal of every conscientious physician. Three ways you can just say no to antibiotic drug abuse. Nevada officials in January reported the death of a woman from an infection resistant to every antibiotic available in the U.S, the type of news we will likely hear more about in the future unless health care providers and consumers change their ways. 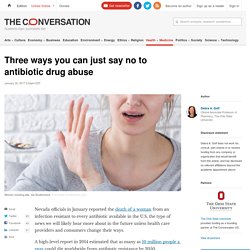 A high-level report in 2014 estimated that as many as 10 million people a year could die worldwide from antibiotic resistance by 2050. It is so urgent an issue that the United Nations General Assembly took up the global threat of antibiotic resistance in September. This was only the fourth health issue ever to be considered by the UN, after HIV, noncommunicable diseases, and Ebola. The Harms of Antipsychotic Drugs: Evidence from Key Studies. Higher medication doses in heart failure? Routine deprescribing of chronic medications to combat polypharmacy. The war against polypharmacy: a new cost-effective geriatric-palliative approach for improving drug therapy in disabled elderly people. Medication withdrawal trials in people aged 65 years and older: a systematic review. 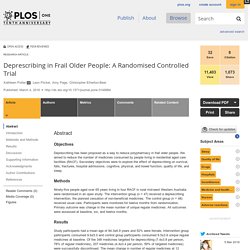 We aimed to reduce the number of medicines consumed by people living in residential aged care facilities (RACF). Secondary objectives were to explore the effect of deprescribing on survival, falls, fractures, hospital admissions, cognitive, physical, and bowel function, quality of life, and sleep. Methods. Deprescribing for older patients.

-- Medicines to treat side effects of other medicines? Sometimes less is more beneficial. About two-thirds of people who are 75 years and older take five medicines or more. 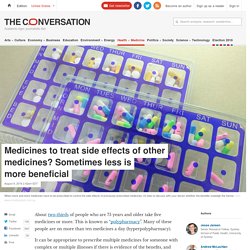 This is known as “polypharmacy”. Many of these people are on more than ten medicines a day (hyperpolypharmacy). It can be appropriate to prescribe multiple medicines for someone with complex or multiple illnesses if there is evidence of the benefits, and harms are minimised. But we know taking multiple medicines strongly increases the risk of unwanted side effects such as drowsiness, dizziness, confusion, falls and injuries and even hospitalisations. 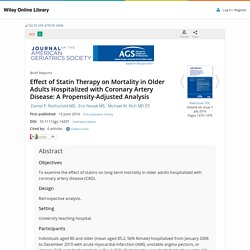 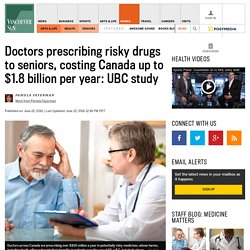 -led study shows. And if indirect costs like hospitalizations stemming from side effects like drug interactions, falls and fractures are included, the costs of such “common, wasteful, and risky” prescribing practices goes up to $1.8 billion, according to the study published in CMAJ Open. “It’s a pattern that needs to be addressed. Doctors are very good at putting patients on new drugs but not so good at stopping by taking patients off of them,” said lead author Steve Morgan, a professor in the school of population and public health at the University of B.C. The study measured the frequency and cost of inappropriate prescribing of drugs known to be potentially risky for older adults.

[90] Reducing polypharmacy: A logical approach. Polypharmacy is the use of multiple medications by a patient. 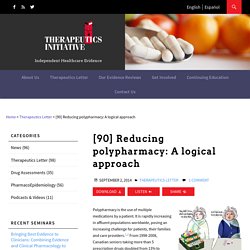 Design, Setting, and Participants Retrospective analysis of administrative, pharmacy, and laboratory data from the OptumLabs Data Warehouse from January 1, 2001, through December 31, 2013. The study included nonpregnant adults 18 years or older with type 2 diabetes who achieved and maintained a hemoglobin A1c (HbA1c) level less than 7.0% without use of insulin and had no episodes of severe hypoglycemia or hyperglycemia in the prior 12 months. Pharmas-co-dependence exposed. Would it be time to say, “No thanks”? Paul Lévesque, MD + Author Affiliations Family physicians need to understand the lengths to which the pharmaceutical industry goes to influence them and how this hampers their professional independence, reduces the effectiveness of their prescriptions, and impoverishes the public health care system.

Cutting inappropriate antipsychotic meds leads to reduction of abusive behaviour in long-term facilities: study. Cutting inappropriate prescriptions of antipsychotics leads to dramatic reductions in falls and abusive behaviour in long-term care homes, a new study shows. Researchers found that, by doing a case-by-case review, they were able to eliminate or reduce the use of the powerful drugs in 54 per cent of patients to whom they had been prescribed. This, in turn, over a one-year period, lead to a: 20-per-cent decrease in falls;33-per-cent drop in verbal abuse of staff;28-per-cent reduction in physical assault of workers;26-per-cent fall in inappropriate behaviour;22-per-cent decrease in resistance to care. Just as importantly, the use of physical restraints did not increase. Association of Proton Pump Inhibitors With Risk of Dementia: A Pharmacoepidemiological Claims Data Analysis. Osteoporosis Overtreatment in a Regional Health Care System.

This cohort study estimates the incidence of osteoporosis overtreatment of women in a health system where DXA reports include T scores for anatomic sites that guidelines recommend against using as a basis for treatment. The US Preventive Services Task Force recommends dual-energy x-ray absorptiometry (DXA) screening for women 65 years or older and for younger women with an elevated risk for fracture.1 However, for women to benefit from this screening, physicians must initiate drug treatment based on the presence of clinically important DXA abnormalities and patient risk. We estimated the frequency of osteoporosis overtreatment in a regional health care system where DXA reports routinely include T scores for anatomic sites (eg, lateral lumbar spine) that the International Society for Clinical Densitometry2 does not recommend for osteoporosis diagnosis.

Deprescribing medications for seniors a safety priority - Health. Health-care workers, patient groups and governments are striving to cut inappropriate prescriptions for seniors by 50 per cent by 2020. The fledgling Canadian Deprescribing Network focuses on discontinuing or tapering off three classes of medications: sedative hypnotics known as benzodiazepines, proton pump inhibitors and some long-acting oral diabetes drugs. The 50 per cent target is an ambitious one that reflects the degree of overprescription for these three medication classes, said Dr.

An updated statement by the Canadian Pediatric Society released last week echoes previous recommendations to use a watchful waiting approach before launching into antibiotic use. Why you don't need antibiotics to fight off the flu or colds (CTVNews Video) In practical terms, if your child has a painful ear or a fever he or she may not really need antibiotics or even benefit from them. Like many childhood illnesses, most ear infections are caused by viruses, and do not respond to antibiotic treatment. Lies My Patients Told Me: “I Take My Medications Every Day.”

However, their role in clinical practice is undefined. FDA warning: men’s testosterone drugs overused. WASHINGTON — The Food and Drug Administration is warning doctors against overprescribing testosterone-boosting drugs for men, saying the popular treatments have not been established as safe or effective for common age-related issues such as low libido and fatigue. The agency said manufacturers must clearly state in their labeling and promotions that the drugs, currently taken by millions of US men, are only approved to treat low testosterone levels caused by disease or injury, not normal aging. Advertisement Additionally, the FDA cautioned that the drugs may increase the risk of heart attack, stroke, and other cardiovascular problems.

Trends in Prescription Drug Use Among Adults in the United States From 1999-2012. Rates of Deintensification of Blood Pressure and Glycemic Medication Treatment Based on Levels of Control and Life Expectancy in Older Patients With Diabetes Mellitus. Importance Older patients with diabetes mellitus receiving medical treatment whose blood pressure (BP) or blood glucose level are potentially dangerously low are rarely deintensified.

Given the established risks of low blood pressure and blood glucose, this is a major opportunity to decrease medication harm. Rethinking the appraisal and approval of drugs for type 2 diabetes. Overuse of Anticoagulation in Treatment of Atrial Fibrillation Patients in University Hospitals of Tehran. A new lexicon for polypharmacy: Implications for research, practice, and educ... Overtreatment of Diabetes in Elderly Patients Remains Underrecognized. Patrick O’Malley, MD, MPH of the Uniformed Services University of the Health Sciences in Maryland, speaks about the overtreatment of diabetes among elderly patients. The overtreatment of 'mild' hypertension is causing more harm than good, say experts.

Millions of people around the world are being treated unnecessarily with drugs for “mild” hypertension (high blood pressure), exposing them to more potential harm than good and wasting health care resources, according to a recent commentary in the journal BMJ. The commentary, whose authors include Dr. High Cost of Medication Non-Adherence.

When you look at the cases and the concerns in the mind of the author, the role of polypharmacy and the burden of care is entirely forgotten. I think they missed the boat on this one; non-adherence is not the root problem. – lessismoremed