Над 10 000 БИЛКИ И ДОБАВКИ - НАЙ-ИЗГОДНИ ЦЕНИ! Iitalla. Results for "crampon" at REI. How to Prevent and Manage Greasy Oily Hair. If you've found yourself on this page, you're likely fed up with an embarrassing greasy hair problem. 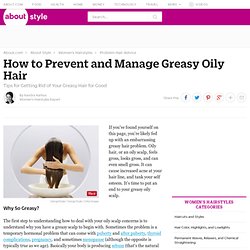 Oily hair, or an oily scalp, feels gross, looks gross, and can even smell gross. It can cause increased acne at your hair line, and tank your self esteem. It's time to put an end to your greasy oily scalp. Why So Greasy? The first step to understanding how to deal with your oily scalp concerns is to understand why you have a greasy scalp to begin with. If the problem is seems temporary or comes on suddenly, a chat with your doctor may be in order to see if you have any underlying hormone concerns that can be treated medically. If not, read on to find out how you can stop that oily scalp in it's nasty greasy tracks. The Oily Hair Cycle An oily scalp is a vicious cycle that is actually often made worse by attempts at reversing the problem. 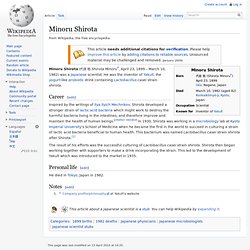 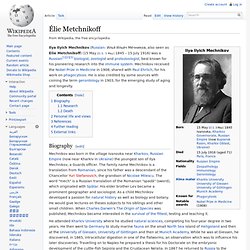 Mechnikov received the Nobel Prize in Medicine in 1908, shared with Paul Ehrlich, for his work on phagocytosis. He is also credited by some sources with coining the term gerontology in 1903, for the emerging study of aging and longevity. Biography[edit] Mechnikov was born in the village Ivanovka near Kharkov, Russian Empire (now near Kharkiv in Ukraine) the youngest son of Ilya Mechnikov, a Guards officer.

The family name Mechnikov is a translation from Romanian, since his father was a descendant of the Chancellor Yuri Stefanovich, the grandson of Nicolae Milescu. Research[edit] Metchnikoff in the middle of his career Mechnikov became interested in the study of microbes, and especially the immune system. Death[edit] References[edit] Docosahexaenoic acid. Docosahexaenoic acid (DHA) is an omega-3 fatty acid that is a primary structural component of the human brain, cerebral cortex, skin, sperm, testicles and retina. 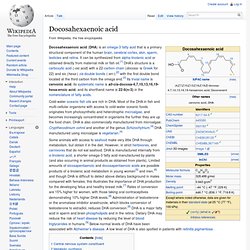 It can be synthesized from alpha-linolenic acid or obtained directly from maternal milk or fish oil.[1] DHA's structure is a carboxylic acid (-oic acid) with a 22-carbon chain (docosa- is Greek for 22) and six (hexa-) cis double bonds (-en-);[2] with the first double bond located at the third carbon from the omega end.[3] Its trivial name is cervonic acid, its systematic name is all-cis-docosa-4,7,10,13,16,19-hexa-enoic acid, and its shorthand name is 22:6(n-3) in the nomenclature of fatty acids. Cold-water oceanic fish oils are rich in DHA. Most of the DHA in fish and multi-cellular organisms with access to cold-water oceanic foods originates from photosynthetic and heterotrophic microalgae, and becomes increasingly concentrated in organisms the further they are up the food chain. Central nervous system constituent[edit] 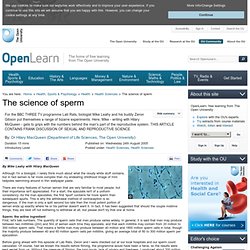 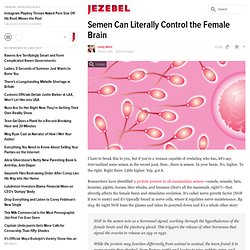 Now I'm jealous. I'm gay as a flannel shirt but I've never gotten a month off. I have PCOS and am pretty sure that it has nothing to do with sperm or lack-there-of. Its an endocrine disorder caused by insulin resistance. I have never read a study about the role of testosterone (which PCOS women usually have too much of) in sexuality, either in men or in women, but it certainly is an interesting thought. Forum. Natural Vision Improvemment and Breathing Development. Eyesight Education for better vision without glasses. and Natural Breathing Classes with Visions of Joy.

Bates Method in a Nutshell (Eye Exercises and Vision Improvement Basics) Written by Alex Eulenberg in 1995, based on Better Eyesight Without Glasses by William H. 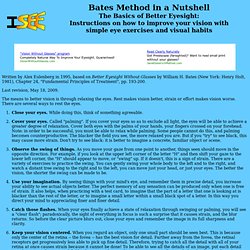 Bates (New York: Henry Holt, 1981), Chapter 24, "Fundamental Principles of Treatment", pp. 193-200. Last revision, May 18, 2009. The means to better vision is through relaxing the eyes. Rest makes vision better, strain or effort makes vision worse. There are several ways to rest the eyes. Bates Method - Introduction to Vision Education. The Bates Method of Vision Education It is now over 100 years since Dr William H Bates first began developing and refining his theories of the causes of poor sight. 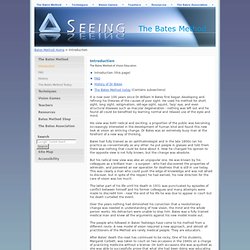 He used his method for short sight, long sight, astigmatism, old-age sight, squint, 'lazy' eye, and even structural diseases such as macular degeneration - nothing was left out and he found all could be benefited by learning normal and relaxed use of the eyes and mind. His view was both radical and exciting; a proportion of the public was becoming increasingly interested in the development of human kind and found this new look at vision an enticing change.

Dr Bates was an extremely busy man at the forefront of a new way of thinking. Innoculations - The True Weapons Of Mass Destruction Causing VIDS (Vaccine Induced Diseases) An Epidemic Of Genocide. Scientists Confirm There is a Second, Secret DNA Code That Controls Genes. 7th January 2014 By Michael Forrester Guest Writer for Wake Up World The fascinating and recent discovery of a new, second DNA code further lends credence to what metaphysical scientists have been saying for millennia — the body speaks two different languages. 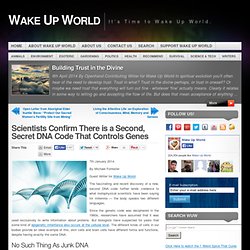 Since the genetic code was deciphered in the 1960s, researchers have assumed that it was used exclusively to write information about proteins. But biologists have suspected for years that some kind of epigenetic inheritance also occurs at the cellular level. No Such Thing As Junk DNA The human genome is packed with at least four million gene switches that reside in bits of DNA that once were dismissed as “junk”. As scientists delved into the “junk” — parts of the DNA that are not actual genes containing instructions for proteins — they discovered a complex system that controls genes. [For more information, see: 97 Percent of Our DNA Has a Higher Purpose And Is Not ‘Junk’ As Labeled By Scientists] DNA Code Controls Genes.