Critics Lash Out At Chinese Scientists Who Edited DNA In Human Embryos. For the first time, scientists have edited DNA in human embryos, a highly controversial step long considered off limits. 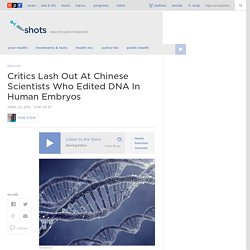 Junjiu Huang and his colleagues at the Sun Yat-sen University in Guangzhou, China, performed a series of experiments involving 86 human embryos to see if they could make changes in a gene known as HBB, which causes the sometimes fatal blood disorder beta-thalassemia. The report, in the journal Protein & Cell, was immediately condemned by other scientists and watchdog groups, who argue the research is unsafe, premature and raises disturbing ethical concerns. "No researcher should have the moral warrant to flout the globally widespread policy agreement against modifying the human germline," Marcy Darnovsky of the Center for Genetics and Society, a watchdog group, wrote in an email to Shots.

"This paper demonstrates the enormous safety risks that any such attempt would entail, and underlines the urgency of working to forestall other such efforts. Scientists Hit Antibiotic Pay Dirt Growing Finicky Bacteria In Lab. You don't want to run into methicillin-resistantStaphylococcus aureus (MRSA) bacteria. 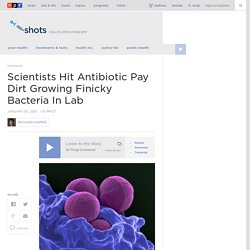 A potential new antibiotic could help fight this bug. CDC hide caption itoggle caption CDC. In Hopes Of Fixing Faulty Genes, One Scientist Starts With The Basics. Jennifer Doudna and her colleagues found an enzyme in bacteria that makes it much easier to edit DNA in animal cells. 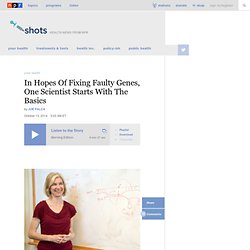 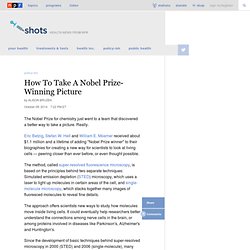 Really. Eric Betzig, Stefan W. Hell and William E. Moerner received about $1.1 million and a lifetime of adding "Nobel Prize winner" to their biographies for creating a new way for scientists to look at living cells — peering closer than ever before, or even thought possible. The method, called super-resolved fluorescence microscopy, is based on the principles behind two separate techniques: Simulated emission depletion (STED) microscopy, which uses a laser to light up molecules in certain areas of the cell, and single-molecule microscopy, which stacks together many images of fluoresced molecules to reveal fine details. The approach offers scientists new ways to study how molecules move inside living cells. 3D-printed vertebra used in world-first spine surgery. For the first time, surgeons in China have implanted an artificial, 3D-printed vertebra into a young patient to replace the bone he lost to cancer. 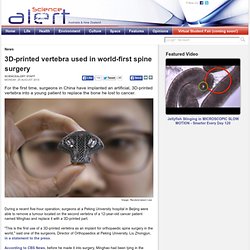 During a recent five-hour operation, surgeons at a Peking University hospital in Beijing were able to remove a tumour located on the second vertebra of a 12-year-old cancer patient named Minghao and replace it with a 3D-printed part. "This is the first use of a 3D-printed vertebra as an implant for orthopaedic spine surgery in the world," said one of the surgeons, Director of Orthopaedics at Peking University, Liu Zhongjun, in a statement to the press. According to CBS News, before he made it into surgery, Minghao had been lying in the orthopaedics ward of the hospital for more than two months. Watch And Be Amazed By The Machinery Of Life : 13.7: Cosmos And Culture.

Sometimes the visible world is all we need to be astonished at this weird thing called reality. 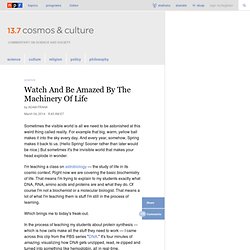 For example that big, warm, yellow ball makes it into the sky every day. And every year, somehow, Spring makes it back to us. (Hello Spring! Sooner rather than later would be nice.) But sometimes it's the invisible world that makes your head explode in wonder. I'm teaching a class on astrobiology — the study of life in its cosmic context. Which brings me to today's freak-out.

In the process of teaching my students about protein synthesis — which is how cells make all the stuff they need to work — I came across this clip from the PBS series "DNA. " This process of information coding, retrieval and manipulation by molecular machines of stunning specificity is going on right now inside every cell in your body AS YOU READ THESE WORDS. 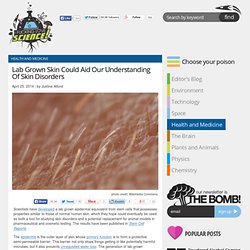 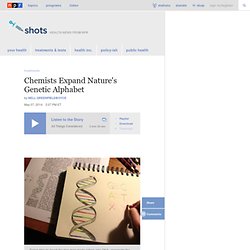 For the first time, scientists have expanded life's genetic alphabet, by inserting two unnatural, man-made "letters" into a bacterium's DNA, and by showing that the cell's machinery can copy them. The advance means that scientists have a new tool for exploring how life encodes information, which could help them understand life's origins. What's more, this is a step towards giving living cells new abilities, like being able to make more and better medicines, cheaper and faster. The instructions in DNA really are written in a kind of code. "Maybe you get three consonants and one vowel," he says. Easy Method For Making Stem Cells Was Too Good To Be True.

Hide captionThe heart beats in a mouse embryo grown with stem cells made from blood. 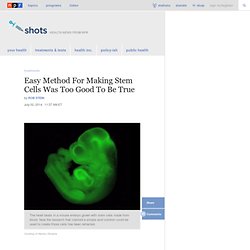 A prestigious scientific journal Wednesday took the unusual step of retracting some high-profile research that had generated international excitement about stem cell research. The British scientific journal Nature retracted two papers published in January by scientists at the Riken research institute in Japan and at Harvard Medical School that claimed that they could create stem cells simply by dipping skin and blood cells into acid. But other scientists almost immediately raised questions about the papers, and investigators eventually found that the research papers contained many errors.